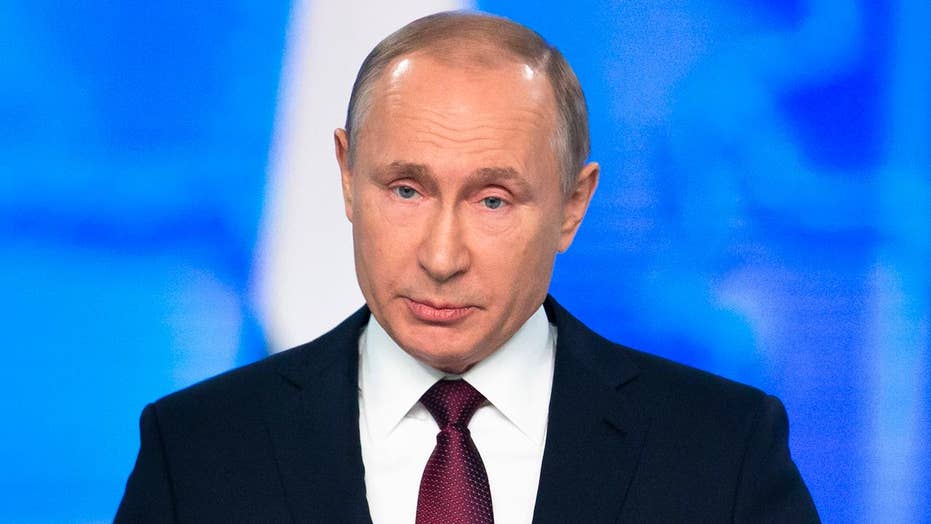 Russian President Vladimir Putin promises in his State of the Union speech to not be the first country to introduce intermediate-range missiles to Europe; Jennifer Griffin reports.

Russian President Vladimir Putin delivered his version of the State of the Union this week – cautioning the United States against deploying missiles to Europe and threatening retaliation for such actions – intensifying concerns of a nuclear showdown and prompting some U.S analysts to raise something of a red flag.

“We may well be at the starting line for a new arms race,” Brett Bruen, a former U.S. Diplomat who served as Director of Global Engagement at the White House, told Fox News. “As in the case of the downing of MH17, these kinds of weapons in the hands of poorly trained, poorly disciplined fighters can bring disastrous consequences. Now mix in a new, unregulated escalation in the creation of armaments, and we have a recipe for a very dangerous situation.”

Putin emphasized in his address that Russia would not be the first to deploy new intermediate-range missiles. But he cautioned a fast and “asymmetrical” retaliation should weapons be placed near Russia's doorstep in Europe. “They will only take 10-12 minutes to reach Moscow. It’s a serious threat to us,” Putin said. “And we have to respond.”

According to Boris Zilberman, deputy director of congressional relations at the Foundation for the Defense of Democracies (FDD), Putin’s speech to the Federal Assembly indeed “included some serious saber-rattling about Russia’s intentions to field new weaponry –  including nuclear-powered cruise missiles, nuclear-powered unmanned submarines and hypersonic ballistic missiles to name a few.”

“What is hopefully different now is a realization by both the US and NATO that these advancements cannot go unchecked,” Zilberman said.

He went on to encourage U.S. officials to consider the “range and speed” of their “prospective weapons.”

John Wood, analyst and author of “Russia, the Asymmetric Threat to the United States,” projected that Russia is "anticipating the complete collapse of the current framework of arms agreements that have existed between our two countries since the dark days of the last Cold War.”

“Under Putin, over the last two decades Russia has been modernizing and overhauling its missile systems to ensure that they overcome any existing missile defense systems currently deployed by the US,” he pointed out. “Meticulously, it has developed missiles to neutralize our most potent weapons, and is in the process of deploying an ICBM (Sarmat) that can take out Texas, a missile system (Iskander) that can reduce the Patriot missile systems in Poland to a pile of rubble, and a nuclear-armed cruise missile (Kinzhel) that can decapitate the NATO headquarters in Brussels.”

Former U.S. President Ronald Reagan holding a hammer and chisel next to the Berlin Wall on Poltsdammer Platz in East Berlin in 1990. In Berlin in 1987, Reagan challenged Soviet leader Mikhail Gorbachev to "tear down this wall," but later developed a warm relationship with his former adversary. REUTERS/Michael Probst/Files JDP - RTR3RSA (REUTERS/Michael Probst)

The U.S last month accused Russia of violating the 1987 Intermediate-Range Nuclear Forces (INF) treaty by developing and testing a cruise missile that exceeds the accepted range of just under 3,500 miles. The weapons were perceived by Washington as a great cause for concern, given that they take less time than an intercontinental ballistic missile to reach a destination, leaving next to no time for appropriate decisions to be made, and thus dramatically heightening the possibility of a large-scale nuclear clash – triggered by a “false launch warning.”

The U.S said it would leave the INF treaty in six months if Moscow did not sufficiently dismantle missile systems accused of breaching the pact. But after denying the alleged violations this month, Russia noted that it would discontinue its commitments under the INF treaty – significantly heightening tensions.

“For years, the U.S. has attempted to persuade Moscow to return to compliance, but Putin was unimpressed with our diplomatic protests and viewed the absence of a robust U.S. response as an invitation to seek additional military advantage,” surmised Bradley Bowman, Senior Director of the Center on Military and Political Power at FDD. “The Trump administration deserves credit for finally taking tangible action in response to Moscow’s violation of the INF Treaty.  Putin’s speech is just the latest duplicitous attempt by Moscow to hide its violation of the treaty and displace blame for its demise to the United States.”

Despite delivering stern words and condemning the “destructive” U.S. policy of slapping them economic sanctions, Putin also made a point in his address of highlighting that Moscow seeks an affable relationship with the United States and that they “don’t want confrontation” and are open to further arms discussions.

“Russia is looking to protect and expand its interests in the Near Abroad–the missiles are but a piece of this strategy. Putin and the US are both working to avoid direct conflict, but the fact remains that Russia is currently attempting to expand its control of Ukraine while subtly threatening Finland and Sweden,” said William Ogborn, US strategic and foreign policy expert, and former diplomacy expert for the US State Department and the Department of Defense. “The US must continue to buttress those countries and our Eastern European allies in response to Russian agitprop, cyber-attacks, and militaristic posturing to deter the kind of direct Russian aggression we saw in Georgia in 2008 and Ukraine in 2014."

Yet others see the issue as important, but not yet critical.

“ The US is years away from fielding any systems that replicate pre-INF Cold War capabilities. Putin knows this. He also knows it’s important for Russia to appear strong domestically and with his allies," added global policy and financial risk analyst, Dennis Santiago. "To his credit, it is having the desired effect of triggering debate.”