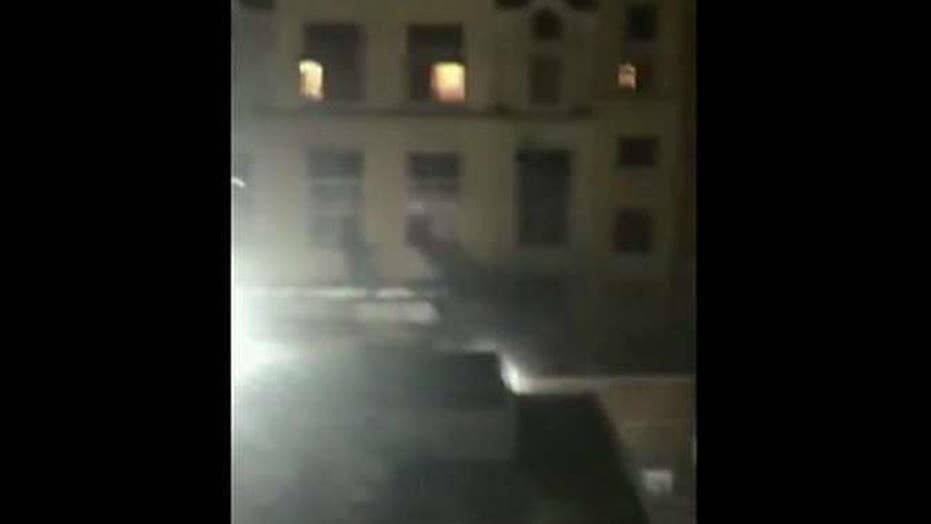 A masked gunman stormed a hotel-casino complex in the Philippine capital early Friday, shooting up a TV screen, torching gambling tables and stuffing a backpack with casino chips before being found dead of an apparent suicide, officials said.

Metropolitan Manila police chief Oscar Albayalde said the English-speaking suspect described him as "white, with a mustache" and about 6 feet tall, was found dead with his rifle on the fifth floor of the Resorts World Manila complex. Police are still searching the suspect's car, parked on the second floor.

Before the attack, Albayalde said he got out of the car and entered the building with his rifle. The guards at the door then ran away after seeing the armed man, according to Albayalde.

Abayalde says there was no indication the incident was terrorism, saying the suspect lost in the casino and wanted to get his money back, or went "totally nuts."

A guard was shot during the melee but survived, and more than 70 others suffered mostly minor injuries in a stampede to get away from the gunman, who was wielding an assault rifle.

The attack sent hundreds fleeing into the night and produced an immediate claim of terrorism from an Islamic State-affiliated operative, according to U.S. terror monitors.

But within three hours of the violence at the complex near Manila's airport, police insisted that they uncovered no ties to terror and suggested the motive could have been robbery.

"He would have shot all the people gambling there" if it had been terrorism, said the national police chief, Gen. Ronald dela Rosa. "But he did not hurt anyone."

Added dela Rosa: "Do not panic. This is not a cause for alarm. We are just alert. ... We cannot attribute this to terrorism without concrete evidence."

The security guard shot was the waist by the gunman and about 75 others suffered mostly minor injuries such as bruising as they stampeded to get out, said police officer Jeffrey Francisco.

The violence unfolded as Muslim militants aligned with the Islamic State group fended off government forces for a 10th day in the southern city of Marawi.

That unrest had sparked fears that the militants might attack elsewhere to divert the focus of thousands of troops trying to quell the siege.

Dela Rosa said CCTV footage showed the gunman ignoring a security guard who tried to question him at the entrance to the complex. He did not hurt the guard but went straight to the gambling area, dela Rosa said.

The U.S. Department of State Bureau of Consular Affairs confirmed there were reports of explosions and gunfire at the resort and urged people to avoid the area.

During an address at the White House Rose Garden to announce he withdrawal of the US from the Paris Climate Accord, Trump said the White House is "closing monitoring the situation."

"It is really very sad what is going on throughout the world with terror," Trump said. "Our thoughts and our prayers are with everyone involved."

Videos posted on social media showed hotel guests running out of the resorts with sounds of apparent gunfire in the background. Smoke began billowing from the upper floor of the building and some reported seeing masked men guns inside the building.

A witness at the resort told ABS-CBN News that he saw the attacker  setting casino tables on fire. He added that hotel guests, some foreigners, headed toward the emergency exits while others ran to the building's basement.

Resorts World Manila is touted as a popular tourist destination that includes a shopping center, casino and hotels. It's located near the Ninoy Aquino International Airport.

The Philippines have been grappling with unrest in the Mindanao region, where President Rodrigo Duterte declared martial law through mid-July in an attempt to crush the insurrection. Militants linked to the Islamic State group laid siege to Marawi to take control of the city.

Duterte sent in the military, with 3,000 soldiers and 30 warplanes involved in the fight to clear the city of ISIS militants, among them foreign fighters from Yemen and Chechnya.

On May 23, the Philippine military launched a botched raid to capture the self-proclaimed head of ISIS in the Philippines, Isnilon Hapilon. Around 500 ISIS fighters had stockpiled weapons in Marawi.

Around 90 percent of the city has been cleared of ISIS militants in recent days, but there have been setbacks including friendly fire bombing that killed Philippine soldiers in recent days.

The SITE Intelligence Group, a U.S. terrorism monitor, said an Islamic State-linked Filipino operative who provides daily updates on the ongoing clashes in Marawi claimed "lone wolf soldiers" of the Islamic State group were responsible for the attack.

An English message by the operative was distributed across several pro-IS Telegram chat groups, SITE said. According to SITE, he wrote: "The lone wolf soldiers of Khilafah attack the heart of Kufar the city of Manila in Resort World."

In recent years, small militant groups in the Philippines, Indonesia and Malaysia have begun unifying under the banner of the Islamic State group. Jose Calida, the top Philippine prosecutor, said last week that the violence on the large southern island of Mindanao "is no longer a rebellion of Filipino citizens."