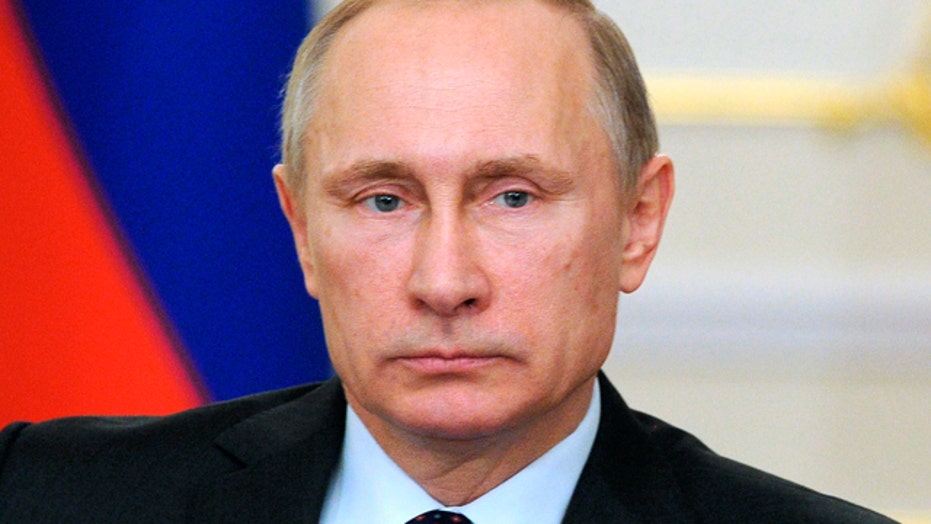 Satter: US needs to raise price of Russian aggression

Russia is using "little green men without patches" to help separatists destabilize Ukraine and President Vladimir Putin redraw the map of eastern Europe, Vice President Joe Biden said Friday, as the leaders of France and Germany headed to Moscow to make a last-ditch bid for peace in the troubled region.

Biden spoke in Brussels, where he met with European Union officials as part of a flurry of diplomatic efforts to stem Russia's incursion into Ukraine. Some 5,300 people have been killed in fighting that began in April, mostly in the eastern portion of the country that borders Russia. Although Putin has insisted he has not sent troops to help pro-Russian separatists fight Kiev's forces, Biden said the Russian leader has been aiding the independence movement since annexing Crimea in March, 2014.

"Ukraine is fighting for their very survival right now," Biden said. "Russia continues to escalate the conflict by sending mercenaries and tanks we euphemistically [call] "little green men without patches," in who are very sophisticated special operations soldiers," Biden said.

Russian forces are suspected by the west of helping separatists down a Malaysian Airlines commercial plane carrying 298 people over Ukraine near the Russian border last July in what may have been a mistake. Kiev released intercepted phone conversations, purportedly between separatists and Russian military officials, and the missile that downed the plane was Russian-made. Ukraine has alleged that Russian troops became emboldened following the incident, sending non-uniformed troops across the border to aid in fighting in rebel strongholds such as Donetsk.

Although German Chancelor Angela Merkel and French President Francois Hollande were to meet with Putin in Moscow to press him for peace, suspicions were growing in Europe that the powerful Russian leader has designs on more than just Ukraine.

"There is a high probability that he will intervene in the Baltics to test NATO's Article 5," Rasmussen said, referring to the section of NATO's charter mandating that other member states come to the defense of a fellow member under armed attack. "Putin knows that if he crosses the red line and attacks a NATO ally, he will be defeated. Let us be quite clear about that. But he is a specialist in hybrid warfare."

All three of the so-called Baltic republics -- Estonia, Latvia, and Lithuania -- were part of the Soviet Union until its dissolution in 1991. All three joined NATO in 2004. All three also have sizable minority populations of ethnic Russians, as does eastern Ukraine, where Putin is accused of whipping up secession sentiment. Rasmussen says his fear is that Moscow will generate a conflict that gives him a pretext to destabilize those nations. It is not clear what would happen if a NATO member claimed Article 5 protection, but was turned down by the NATO council.

Biden offered little hope that Putin could be taken at his word, and said the U.S. and Europe must stand together to support cash-strapped Ukraine.

"President Putin continues to call for new peace plans as his troops roll through the Ukrainian countryside and he absolutely ignores every agreement that his country has signed in the past and he has signed recently," Biden said. "We, the United States, and Europe as a whole, have to stand with Ukraine at this moment. Ukraine needs our financial assistance and support as it pursues reforms and even in the face, in the face of this military onslaught."

Meanwhile, in eastern Ukraine, the rebels reached an agreement Friday with government forces on a humanitarian corridor to evacuate civilians from the epicenter of fighting on Friday. Rebel leaders said the agreement would allow the evacuation of civilians from Debaltseve, a key railway hub that has become the focus of fighting in recent weeks because of its strategic location. It wasn't immediately clear where the evacuees would go.

The cease-fire around Debaltseve held Friday as a convoy of several dozen buses drove from nearby Vuhelhirsk toward Debaltsevo, where a shrinking population has been trapped in cross-fire and left without power, heating and running water for almost two weeks. Halfway to Debaltsevo, the convoy's movement was stopped by concrete blocks, apparently intended to block military vehicles from using the road.

Merkel and Hollande are set to hold talks with Putin in the Kremlin a day after discussing their proposals with Ukrainian President Petro Poroshenko. In a sign of the importance of the initiative, this will be Merkel's first trip to Moscow since Ukraine's conflict broke out last year.

The fighting in eastern Ukraine between Russia-backed separatist rebels and Ukrainian forces has intensified sharply over the past two weeks. Russia vehemently denies that it is backing the insurgency with troops and weapons, but U.S. Secretary of State John Kerry rejected that denial on Thursday's visit to Kiev.