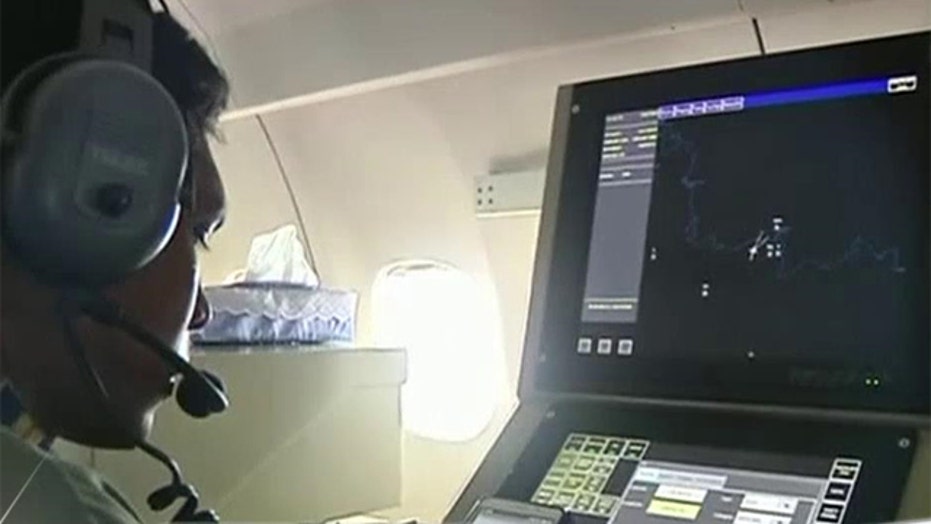 Four large objects found in the search for flight 8501

Emotionally exhausted family members sang and cried at a tiny chapel in Surabaya, the city where Flight 8501 departed last week. The Rev. Philip Mantofa, who heads the congregation at Mawar Sharon Church -- where more than a quarter of the victims were members -- urged those gathered to find comfort in their faith.

"If God has called your child, allow me to say this: Your child is not to be pitied," Mantofa said, locking eyes with a grieving father seated in the front row. "Your child is already in God's arms. One day, your family will be reunited in heaven."

It is not known what caused the Singapore-bound plane to crash into the Java Sea 42 minutes after taking off on what was supposed to be a two-hour flight. Just before losing contact, the pilot told air traffic control that he was approaching threatening clouds, but was denied permission to climb to a higher altitude because of heavy air traffic.

On Friday, the Wall Street Journal reported that Indonesia's weather agency issued a 14-page report described as a "meteorological analysis" of the accident. The report described how ice on the engine could have caused significant damage, but stopped short of naming it as the single cause of the tragedy.

Surabaya, Indonesia's second-largest city, has been gripped by grief as bodies, one by one, continue arriving in simple, numbered coffins after being painstakingly pulled from the water. Three more bodies were recovered Sunday, raising the total to 34, with bad weather continuing to hamper recovery efforts.

Round-the-clock coverage of the disaster has also reignited fear of flying for some in a country that has suffered a string of accidents in recent years, as new airlines pop up to meet booming demand in Indonesia, a sprawling archipelago nation of 250 million people.

Late Saturday, some passengers panicked when the auxiliary power failed inside another AirAsia plane leaving from Surabaya, this one headed to the Indonesian city of Bandung, according to a statement issued by the airline.

The lights and other electrical equipment shut down inside the cabin while the plane was still on the tarmac, and the pilot returned to the gate. Of the 161 passengers on board, 60 refused to fly and were given full refunds, AirAsia officials said.

"There was no engine trouble, but some of the passengers were spooked," said AirAsia chairman Kamarudin Meranun. "It is understandable, since the crash is still fresh in their minds."

The crash of Flight 8501 has triggered an intensive international search-and-recovery operation involving 20 planes and helicopters along with 27 ships from Indonesia, Japan, Malaysia, Singapore and the United States. All have been desperately searching for the all-important black boxes, pieces of the Airbus A320 and corpses.

The investigation got a huge boost this weekend when sonar equipment identified five large objects on the seabed in the search area, but no images have been captured confirming they are part of the plane. Suspected plane parts also were seen scattered on beaches during an aerial survey.

After detecting the five large objects -- the biggest measuring 59 feet long and 18 feet wide and believed to be the fuselage -- officials said it was possible that many passengers and crew will be found inside the wreckage.

Divers tried to reach the site on Sunday, but rolling seas stirred up silt and mud, leaving them with zero visibility, said Henry Bambang Soelistyo, chief of Indonesia's National Search and Rescue Agency.

"At this moment, it's impossible to send any divers," he said. "We'll wait until the weather gets better."

While it remains unclear what caused the plane to plunge into the Java Sea, bad weather appears to have been a factor, according to a report by Indonesia's Meteorology, Climatology and Geophysics Agency.

Indonesian authorities have announced the grounding of AirAsia flights from Surabaya to Singapore, with the Transport Ministry saying the airline did not have a permit to fly on Sundays. However, Singapore's Civil Aviation Authority said that from its end, the airline had been approved to fly the route daily.

AirAsia, which began operations in 2001 and quickly became one of the region's most popular low-cost carriers, said it was reviewing the suspension. The crash was the airline's first.

While Indonesia is predominantly Muslim, many of the plane's passengers were Christians of Chinese descent. The Rev. Mantofa's congregation was hit particularly hard, with 45 of the crash victims -- from 13 families -- belonging to his large Penecostal church.

Following Sunday's chapel service, Edo Anggradinata, 52, said he was finally starting to let go of the hope that his sister and her two children had survived.

"My mind is still in a daze," he said. "If there is a miracle, I hope they are alive, but I know this is tough. I just pray that we find their bodies."