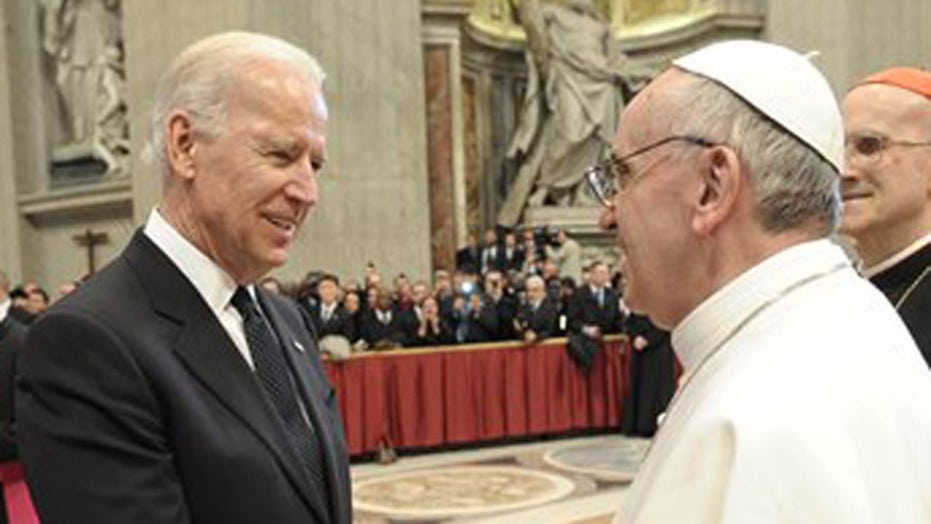 Pope Francis officially began his ministry as the 266th pope -- and as the first from South America -- on Tuesday in an installation Mass simplified to suit his style, but still grand enough to draw thousands to St. Peter's Square to witness history.

The Vatican said between 150,000-200,000 people attended the Mass, held under bright blue skies after days of chilly rain and featuring flag-waving fans from around the world. In Buenos Aires, thousands of people packed the central Plaza di Mayo square to watch the celebration on giant TV screens and erupted in joy when Francis called them from Rome, his words broadcast to the crowd over loudspeakers.

"I want to ask a favor," Francis told them. "I want to ask you to walk together, and take care of one another. ... And don't forget that this bishop who is far away loves you very much. Pray for me."

Back in Rome, Francis was interrupted by applause several times during his homily, including when he spoke of the need to protect the environment, serve one another with love and not allow "omens of destruction," hatred, envy and pride to "defile our lives."

Francis said the role of the pope is to open his arms and protect all of humanity, but "especially the poorest, the weakest, the least important, those whom Matthew lists in the final judgment on love: the hungry, the thirsty, the stranger, the naked, the sick and those in prison."

"Today amid so much darkness we need to see the light of hope and to be men and women who bring hope to others," he said. "To protect creation, to protect every man and every woman, to look upon them with tenderness and love, is to open up a horizon of hope, it is to let a shaft of light break through the heavy clouds," he said.

Francis, 76, thrilled the crowd at the start of the Mass by taking a long round-about through the sun-drenched piazza and getting out of his jeep to bless a disabled man. It was a gesture from a man whose short papacy so far is becoming defined by such spontaneous forays into the crowd and concern for the disadvantaged.

For nearly a half-hour before the Mass began, Francis toured the square in the open-air jeep, waving, shouting "Ciao!" to well-wishers and occasionally kissing babies handed up to him as if he had been doing this for years. At one point, as he neared a group of people in wheelchairs, he signaled for the jeep to stop, hopped off, and went to bless a man held up to the barricade by an aide.

"I like him because he loves the poor," said 7-year-old Pietro Loretti, who attended the Mass from Barletta in southern Italy. Another child in the crowd, 9-year-old Benedetta Vergetti from Cervetri near Rome, also skipped school to attend.

Before the Mass began, Francis received the fisherman's ring symbolizing the papacy and a woolen stole symbolizing his role as shepherd of his flock. He also received vows of obedience from a half-dozen cardinals — a potent symbol given his predecessor Benedict XVI is still alive and was reportedly watching the proceedings on TV from the papal retreat in Castel Gandolfo.

A cardinal intoned the rite of inauguration, saying: "The Good Shepherd charged Peter to feed his lambs and his sheep; today you succeed him as the bishop of this church."

In a Vatican press release, press office director Father Federico Lombardi said the correct term for the ceremony is not enthronement, but inauguration.

"As successor of Peter, the Pope is Bishop of Rome and the Church of Rome 'presides in love' over the others," he said. "Also, it is a celebration rich with symbols that recall the Pope's tie to St. Peter, beginning with the place where, according to tradition, Peter was martyred."

Some 132 official delegations attended, including more than a half-dozen heads of state from Latin America, a sign of the significance of the election for the region. Francis has made clear he wants his pontificate to be focused on the poor, a message that has resonance in a poverty-stricken region that counts 40 percent of the world's Catholics.

Francis directed his homily to them, saying: "I would like to ask all those who have positions of responsibility in economic, political and social life, and all men and women of goodwill: let us be protectors of creation, protectors of God's plan inscribed in nature, protectors of one another and of the environment."

Among the religious VIPs attending was the spiritual leader of the world's Orthodox Christians, Bartholomew I, who became the first patriarch from the Istanbul-based church to attend a papal investiture since the two branches of Christianity split nearly 1,000 years ago. Also attending for the first time was the chief rabbi of Rome. Their presence underscores the broad hopes for ecumenical and interfaith dialogue in this new papacy given Francis' own work for improved relations and St. Francis of Assisi.

In a gesture to Christians in the East, the pope prayed with Eastern rite Catholic patriarchs and archbishops before the tomb of St. Peter at the start of the Mass and the Gospel was chanted in Greek rather than the traditional Latin.

But it is Francis' history of living with the poor and working for them while archbishop of Buenos Aires that seems to have resonated with ordinary Catholics who say they are hopeful that Francis can inspire a new generation of faithful who have fallen away from the church.

"I think he'll revive the sentiments of Catholics who received the sacraments but don't go to Mass anymore, and awaken the sentiments of people who don't believe anymore in the church, for good reason," said Judith Teloni, an Argentine tourist guide who lives in Rome and attended the Mass with a friend.

"As an Argentine, he was our cardinal. It's a great joy for us," said Edoardo Fernandez Mendia, from the Argentine Pampas who was in the crowd. Recalling another great moment in Argentine history, when soccer great Diego Maradona scored an improbable goal in the 1986 World Cup, he said: "And for the second time, the Hand of God came to Argentina."

Francis has made headlines with his simple style since the moment he appeared to the world on the balcony of St. Peter's Basilica, eschewing the ermine-lined red velvet cape his predecessor wore in favor of the simple papal white cassock, then paying his own bill at the hotel where he stayed prior to the conclave that elected him pope.

A wax cast of the ring Francis received was first presented to Pope Paul VI, who presided over the second half of the Second Vatican Council, the 1962-65 meetings that revolutionized the church. Paul never wore it but the cast was subsequently made into the ring that Francis chose among several other more ornate ones.

Francis will receive each of the government delegations in St. Peter's Basilica after the Mass, and then hold an audience with the visiting Christian delegations on Wednesday. He has a break from activity on Thursday; a gracious nod perhaps to the fact that the Archbishop of Canterbury, Justin Welby, is being installed that day in London.

As a result, Welby won't be representing the Anglican Communion at Tuesday's installation Mass for Francis, sending instead a lower-level delegation. All told, six sovereign rulers, 31 heads of state, three princes and 11 heads of government are attending, the Vatican said.