The Catholic Church is reeling after a grand jury report in Pennsylvania found that possibly more than 1,000 children in six dioceses had been sexually abused by about 300 priests or higher ranking officials.

On top of that, the report said that bishops and other top church officials had tried to contain the public outcry and liability by covering up the crimes, which Pennsylvania Attorney General Josh Shapiro claimed “went all the way to the Vatican.”

But the report, and the Vatican’s subsequent tepid response, has exposed a split within the Holy See which threatens to bring down Pope Francis just five years after he replaced Pope Benedict XVI.

Several days after the news broke and dominated U.S. headlines, the Vatican released a statement. Using uncharacteristically strong language for the Vatican, even on such serious issues as child abuse, the Holy See spokesman said to victims that “the pope is on their side.”

Vatican spokesman Greg Burke said the incidents of abuse graphically documented in the grand jury report were “betrayals of trust that robbed survivors of their dignity and their faith.”

“The church must learn hard lessons from its past, and there should be accountability for both abusers and those who permitted abuse to occur,” he said.

POPE'S ALLEGED COVER-UP PIVOTS ON WHEN, IF SANCTIONS IMPOSED 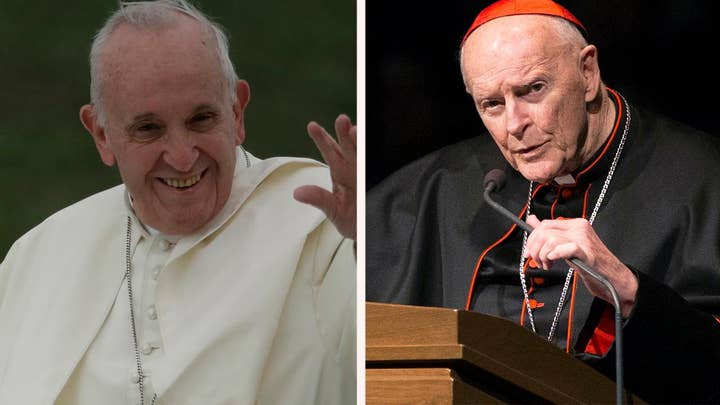 But for many Catholics and long-time Vatican observers, the acknowledgment of the criminal behavior was too little, too late.

The Freedom From Religion Foundation, a group that describes itself as agnostics and atheists (including former Catholics) are running a full-page ad later this week in The New York Times urging people to leave the Church.

“Priests were raping little boys and girls, and the men of God who were responsible for them not only did nothing; they hid it all,” the ad says. “Six dioceses, three hundred predatory priests, a staggering 1,000-plus victims. No bishops indicted. The pope’s response? All words, no action — except, insultingly, to call on the faithful to ‘pray and fast.’”

The advert in the Times comes after Francis was taken to task on Sunday by Archbishop Carlo Maria Vigano, the former Vatican ambassador to the U.S.

Pope Francis, flanked by Vatican spokesperson Greg Burke, listens to a journalist's question during a press conference aboard of the flight to Rome at the end of his two-day visit to Ireland, Sunday (AP)

In a damning 11-page letter released to ultra-conservative media in Europe, during the pope’s trip to Ireland over the weekend, Vigano accused the pontiff of being among Church hierarchy who knew – and did little or nothing towards disciplining – about rumored sexual indiscretions by ex-Cardinal Theodore McCarrick.

In fact, Vigano asserted, McCarrick was rehabilitated from sanctions imposed by Pope Benedict XVI, promoted and made part of high-profile Vatican events even as rumors about him swirled.

The timing of Vigano’s accusations have been seen by the progressive pope’s supporters as a deliberate attempt by more conservative factions to undermine his tenure, which has seen him reach out to homosexuals and divorced parishioners.

Compounding matters, Francis told reporters on Sunday that he "won't say a word" about Vigano's memo, saying it "speaks for itself".

Francis burst onto the global stage as a papal rock star of sorts in 2013, with people dubbing him a breath of fresh air. The first South American-born pope routinely went to prisons and washed inmates’ feet, spoke to the homeless, and expressed respect and fondness for those cast aside by society.

David Gibson, a former veteran religion writer and now director of the Center on Religion and Culture at Fordham University, says the backlash against Francis for the slower than preferred response to the abuse allegations is “unfair.”

Gibson said that Francis, admittedly, has been on a learning curve as far as dealing with a decades-old crisis of sex abuse by priests and high-ranking church officials.

“He seems to be too much a creature of the Old Church,” Gibson said. “But he’s been better than his predecessors. He believed in churchman before victims. He moved very carefully, giving deference to the church. That was evident in Chile, and the sex abuse allegations there.”

Francis defended a bishop in his home country who was accused by victims of knowing about and ignoring abuse they suffered.

Then, he did an about-face, practically forcing Chilean bishops to resign for their “grave defects” in handling the abuse reports.

The move was noted as the first such time the Vatican initiated a bold action to hold bishops accountable for covering up sex abuse, and it did it very publicly.

“Pope Francis wrote a very heartfelt apology, he said ‘I was wrong and I must change,’” Gibson said. “No pope ever had fired a bishop.”

The scandals increasingly coming to the surface are “a legacy he inherited from the last 60 years.”

However, that does not excuse Pope Francis from slow responses now, Gibson said.

“He is the pope, so it’s his responsibility to fix it.”

Victims and their advocates for decades have lamented that top Catholic churchmen repeatedly put the reputation of the church ahead of obligations to protect children from harm from pedophile priests.

Groups of Catholic abuse survivors say swift and public actions are needed immediately to change the culture in dioceses and parishes that allow such abuses to still occur.

“As he arrived in Ireland Pope Francis has once again missed another opportunity to seriously and concretely tell the world what he is going to do about the child sexual abuse and cover up crisis,” said Peter Isely, founding member of Ending Clergy Abuse (ECA), a worldwide organization of abuse survivors and human rights activists who calling on Roman Catholic Church to end clergy abuse. “This crisis is a global crisis.  It not only effects Ireland, where there has been so much suffering, but in every corner of the globe where the Catholic Church is present.”