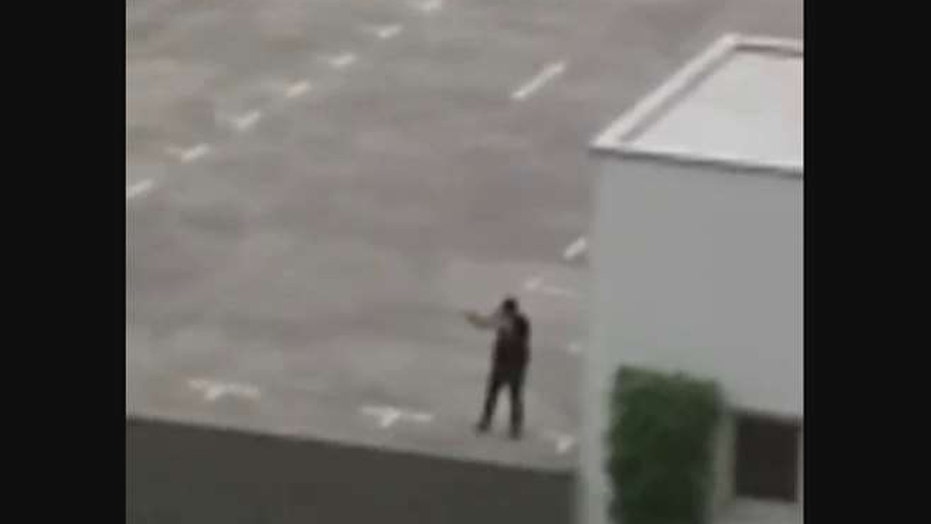 MUNICH – Police were hunting Saturday for clues to explain why an 18-year-old German-Iranian man opened fire at a crowded Munich shopping mall and fast-food restaurant, killing nine people and wounding at least 16 others before killing himself.

Munich police chief Hubertus Andrae said "no evidence" of links to the Islamic State group has been found in the home and room of the suspect.

Andrae also told a news conference that the crime and the perpetrator had "absolutely no" link to the issue of refugees.

The attack in the Bavarian capital sparked a massive security operation as authorities — already on edge after the recent attacks in Wuerzburg and Nice, France — received witness reports of multiple shooters carrying rifles shortly before 6 p.m. (1600 GMT). Six hours later police declared a "cautious all clear," saying the suspect was among the 10 dead and that he had likely acted alone.

Peter Beck, a Munich police spokesman, said officers were still collecting evidence at the scene of the crime Saturday morning.

"With regard to the suspect we have to examine everything, but we don't know yet what triggered the crime," Beck told The Associated Press.

He declined to confirm reports by German daily Bild that officers had raided a home in the city's Marxvorstadt district about 2 kilometers (1.2 miles) from the mall and were interviewing the suspect's father, citing "ongoing police operations."

Beck said the number of people receiving hospital treatment stood at 16, three of whom were seriously wounded. Security restrictions in the city have been lifted and public transport is operating as normal, Beck said.

German Chancellor Angela Merkel was due to chair a meeting of her government's security Cabinet Saturday.

Fatalities and Injuries from Terrorist Attacks in Germany | FindTheData

At an address on Dachauer Strasse that was searched by police early Saturday, a neighbor described the suspect as "very quiet."

"He only ever said 'hi'. His whole body language was of somebody who was very shy," said Stephan, a coffee shop owner who would only give his first name.

"He never came in to the cafe," he added. "He was just a neighbor and took out the trash but never talked."

Some 2,300 police from across Germany and neighboring Austria were scrambled in response to the attack, which happened less than a week after a 17-year-old Afghan asylum-seeker wounded five people in an ax-and-knife rampage that started on a regional train near the Bavarian city of Wuerzburg. The Islamic State group claimed responsibility for the train attack, but authorities have said the teen — who was shot and killed by police — likely acted alone.

Andrae said early Saturday that the shooting suspect was a dual citizen who had lived in the city for some time, and whose motive was still "fully unclear." He said it was too early to label the attack an act of terrorism, though police had used the term earlier to describe the nature of their operation, which included calling in the elite GSG9 special operations force.

"The question of terrorism or a rampage is tied to motive, and we don't know the motive," Andrae said.

Andrae said the suspect's body was found about 2 1/2 hours after the attack, which started shortly before 6 p.m. (1600 GMT) at a McDonald's restaurant across the street from the mall. The body was determined to be the shooter based on witness statements and closed-circuit television footage of the attack, he said. The man, whose name wasn't released, was not previously known to police and there was no evidence of any links to terrorist organizations, Andrae said.

A cell-phone video posted online showed the suspect dressed in black standing on a rooftop parking area of the mall yelling back and forth with the person filming, saying at one point "I'm German" and eventually firing shots. Andrae said police believe the video is genuine.

David Akhavan, a 37-year-old who from Tehran, Iran, who works at the Shandiz Persian restaurant, described his anguish as he learned of the shooting.

"I started to get texts from friends asking if I was safe," he said. "Then, my thoughts were: please, don't be a Muslim. Please don't be Middle Eastern. Please don't be Afghani. I don't accept any of this violence."

Witnesses had reported seeing three men with firearms near the Olympia Einkaufszentrum mall, but Andrae said two other people who fled the area were investigated but had "nothing to do with the incident."

Local residents described the scene as the shooting unfolded.

"I was standing on the balcony smoking a cigarette. Suddenly I heard shots," said Ferdinand Bozorgzad, who lives in a high-rise building next to Olympic Shopping Center. "First I thought someone had thrown some firecrackers. I looked down at the Mc Donald*s and saw someone shooting into the crowd. Then I saw two people lying there. "

Franco Augustini, another local resident, said his daughter hid in the shopping center during the attack.

"Next to our flat was a woman who was full of blood," Augustini said. "My wife had a bottle of water. Then we helped to wash her. It was horrible and made me speechless."

Andrae, the police chief, said the nine fatalities included young people; children were among the 16 wounded, three of whom were in critical condition.

Public broadcaster Bayerischer Rundfunk reported that most of those killed were aged 15 to 21 years. A 45-year-old woman was also killed, BR reported without citing sources.

At least three of the victims appeared to be of Kosovo-Albanian origin, according to Facebook posts from family members. Their identities have not been officially confirmed

Munich has large communities of people who fled the Balkan wars in the 1990s but like many German cities has in recent years also become home to a diverse mix of people from many different countries, including Iran.