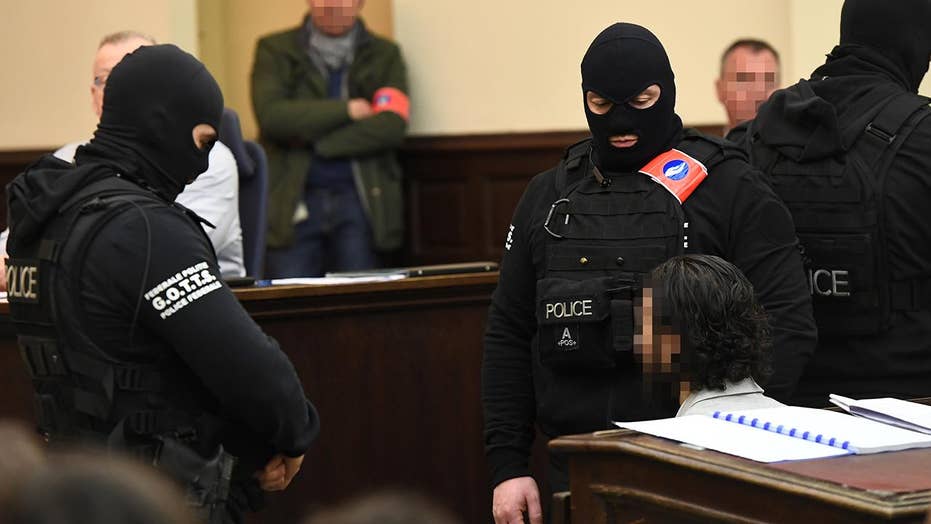 The lone surviving member of the ISIS terror cell behind the deadly 2015 attacks on Paris refused to stand in a Belgian court Monday, daring the media to "judge me" during his first appearance in public since his arrest nearly two years ago.

Salah Abdeslam appeared in a Brussels courtroom on charges of attempted murder stemming from a police shootout in March 2016 from which he fled, four months after the coordinated Paris terror attacks that killed 130 people at a theatre, the national stadium and cafes.

Abdeslam and two suspects were hiding in an apartment at the time when police arrived for a routine search, authorities said. Three officers were wounded in the shootout that followed and one suspect was killed. Abdeslam was captured a few days later in the flashpoint Brussels neighborhood of Molenbeek.

The 28-year-old, now wearing a full beard and longer hair than in pictures released before he was arrested, was flanked by masked guards on Monday and refused to answer questions beyond a few formalities, Sky News reported.

When asked by a judge why he refused to stand, Abdeslam said: "I'm tired, I did not sleep."

Salah Abdeslam appears in court during his trial in Brussels. He's set to be tried in France, too, for a series of 2015 terror attacks there. (Reuters)

He later declared his Muslim faith and cited his right to silence before accusing the media of condemning him ahead of his trial.

“Judge me. Do as you want with me,” he told the judge.

He also told the courtroom he defends himself "by keeping silent."

Abdeslam has previously refused to speak to investigators in France about the attacks there. In the days after his capture, ISIS terrorists struck in Brussels in bombings at the Brussels airport and metro station. In total, 162 people died in the two attacks. His trial in France is not expected to take place until next year, according to Reuters.

The 28-year-old arrived in the Belgian capital on Monday morning after being transferred from a prison in France. Security was high at the Brussels courthouse, with armed guards and multiple checkpoints leading to the courtroom.

A court artist drawing shows Salah Abdeslam, one of the suspects in the 2015 Islamic State attacks in Paris, on Feb. 5. (Reuters)

He is being tried alongside a second defendant, Sofiane Ayari, in relation to the shootout. The judge's questions Monday were oriented toward establishing which of the two had also fired on officers.

Ayari, a 24-year-old Tunisian, told the court that he had been with ISIS forces in Syria. He said he had been with Abdeslam at the site of the shootout, but only the third man who was killed by police fired on officers who raided their hideout.

TIMELINE OF RECENT VEHICLE ATTACKS IN US, EUROPE

Police stand guard outside the trial of Salah Abdeslam at the Brussels Justice Palace. (AP)

The trial in Brussels drew relatives of victims of the Paris attacks to hear the case, according to Sky News.

"We want to see what elements will be provided in order to have a better understanding of this series of events and terror attacks, in France and in Belgium," said Guillaume Denoix de Saint Marc, a member of V-Europe, a victims' association. "This trial is one of the pieces of a global puzzle which will answer some of our questions. But at the same time, we expect to be very disappointed and to learn nothing."