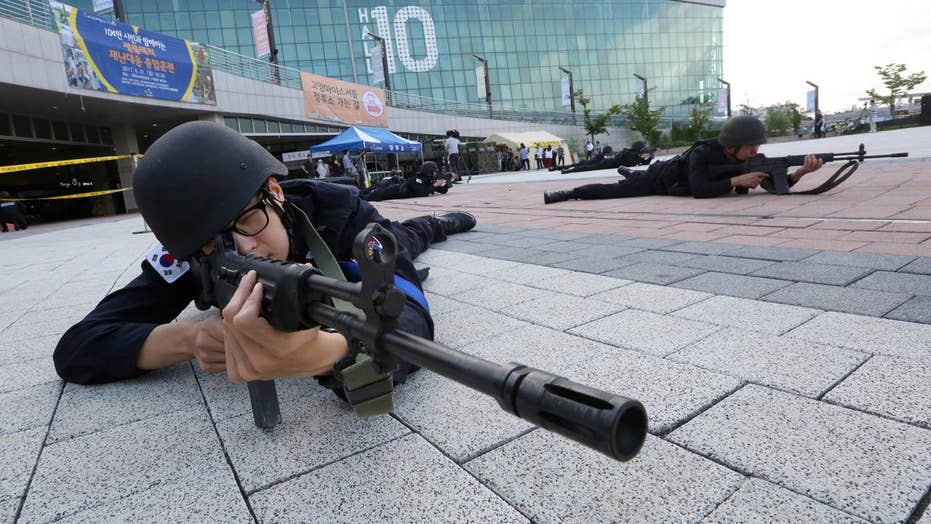 President Trump is pictured looking out over a Guam graveyard cluttered with crosses in a photoshopped image from the newest propaganda film -- and grim warning -- from North Korea.

The regime followed the video with a statement posted through its KCNA news agency, saying Trump "spouted rubbish" and frequently tweeted about "weird articles of his ego-driven thoughts" and attacking South Korea's "puppy-like" Defense Minister Song Young-moo for "pinning hope on that mad guy."

But the picture of a graveyard believed to be in Guam may be the most rattling in the video, given dictator Kim Jong Un's repeated threats to strike the U.S. territory with a missile. The video also features Vice President Pence engulfed in flames.

"Trump spouted rubbish that if a war breaks out, it would be on the Korean Peninsula, and if thousands of people die, they would be only Koreans and Americans may sleep a sound sleep," the KCNA statement said.

KCNA wrote on Tuesday it would be ready to stage "ruthless" retaliation against South Korea and the U.S., according to South Korea's Yonhap News Agency.

"The U.S. will be wholly held accountable for the catastrophic consequences to be entailed by such reckless aggressive war maneuvers, as it chose a military confrontation [with North Korea]," a North Korean military spokesman said to KCNA.

"The panel is investigating reported prohibited chemical, ballistic missile and conventional arms cooperation between Syria and the [North Korea]," the report stated.

The experts wrote the panel was informed there were "reasons to believe" the items were part of the Korea Mining Development Trading Corporation contract, which was blacklisted in 2009 by the Security Council. The council said the trading corporation was North Korea's top arms dealer and an exporter of materials for ballistic missiles and conventional weapons.

"The measures taken by [North Korea] to strengthen its nuclear deterrence and develop inter-continental rockets is justifiable and a legitimate option for self-defense in the face of such apparent and real threats," Ju said at a U.N.-sponsored disarmament conference.