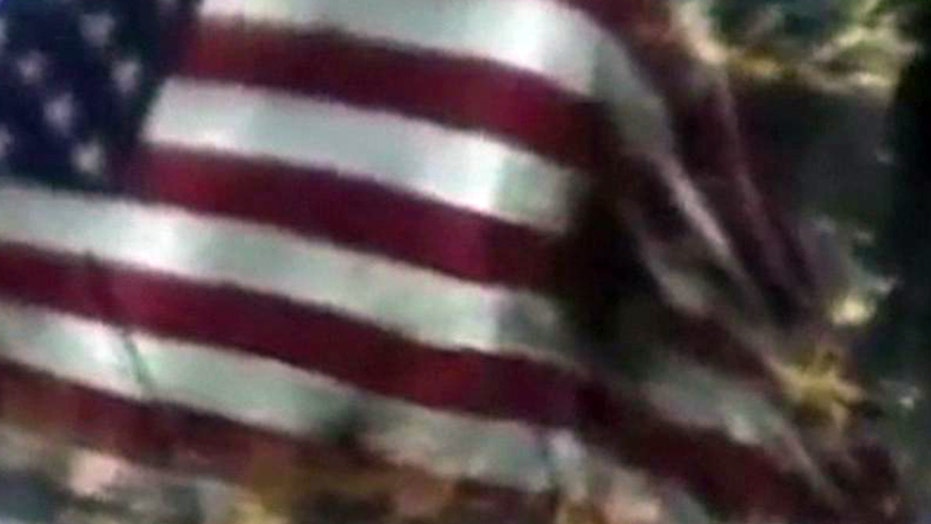 North Korea, already gearing up for yet another nuclear test, has posted a bizarre online video depicting New York under an apparent missile attack with "We Are the World" serving as a soundtrack.

The three-minute video posted on YouTube on Saturday was released by Uriminzokkiri, which distributes news and propaganda from North Korea’s state-run media. It features a young man in a dream sequence in which he sees himself aboard a North Korean space shuttle launched into orbit by the same type of rocket Pyongyang successfully launched in December. A densely populated city, which is shrouded in a U.S. flag, is then depicted to the tune of “We Are the World,” the charity single recorded in 1985.

“Somewhere in the United States, black clouds of smoke are billowing,” reads a caption translated from Korean. “It seems that the nest of wickedness is ablaze with the fire started by itself.”

The video concludes with the young man saying his dream will “surely” come true. As of early Tuesday, it had been viewed more than 60,000 times.

“Despite all kinds of attempts by imperialists to isolate and crush us … never will anyone be able to stop the people marching toward a final victory,” a final caption reads.

Former U.S. Ambassador to the United Nations John Bolton, in a statement to FoxNews.com, said the video is another "disturbing reminder" of what a nuclear-capable North Korea would mean to the world.

"The film is yet another disturbing reminder that a nuclear-capable North Korea is a threat in its region and worldwide," Bolton said. "We should not delude ourselves by thinking that Pyongyang will ever be negotiated out of that capability."

Doug Bandow, a senior fellow for Cato Institute specializing in foreign policy, said the “weird” video is proof that Pyongyang has entered the digital age.

“My first reaction is they are getting with the Internet age,” Bandow told FoxNews.com. “For years, they have used vivid imagery in their rhetoric — they once threatened to turn Seoul into a lake of fire — so they’ve figured out a way to put pictures to the rhetoric. But it doesn’t look to me to be more than an amplification of what they’ve said for years.”

The video is little more than “bluster,” Bandow said, and should not be seen as a threat to the United States.

“I think this is bluster,” he said. “The good news here is that while they’re evil, they’re not stupid. They know they would lose.”

Bruce Klinger, a senior research fellow for northeast Asia at the Heritage Foundation, said the “strange, amateurish” video does not directly warn of an impending attack, but rather suggests that “wouldn’t it be nice” if an assault on the United States were to occur.

“In a way, it’s very similar to all those North Korean propaganda posters of Uncle Sam being bayoneted or the U.S. Capitol dome being blown up,” Klinger told FoxNews.com. “In North Korea, death to Americans is a common theme.”

The video, Klinger said, is also yet another indication that Kim Jong Un’s regime will not be much different than that of his father and grandfather.

“It’s very consistent with decades of North Korean propaganda,” he said. “Things will not change under Kim Jong Un.”

North Korea announced last month that it would conduct a nuclear test to protest Security Council sanctions toughened after a satellite launch in December that the U.S. and other critics said was a disguised test of banned missile technology. The council ordered North Korea in the sanctions resolution to refrain from a nuclear test or face "significant action."

Pyongyang's two previous nuclear tests, in 2006 and 2009, both occurred after it was condemned by the United Nations for rocket launches.

The sanctions — designed to derail the country's rogue nuclear weapons and ballistic missile programs — bar North Korea from testing or using nuclear or ballistic missile technology, as well as from importing or exporting material for those programs.