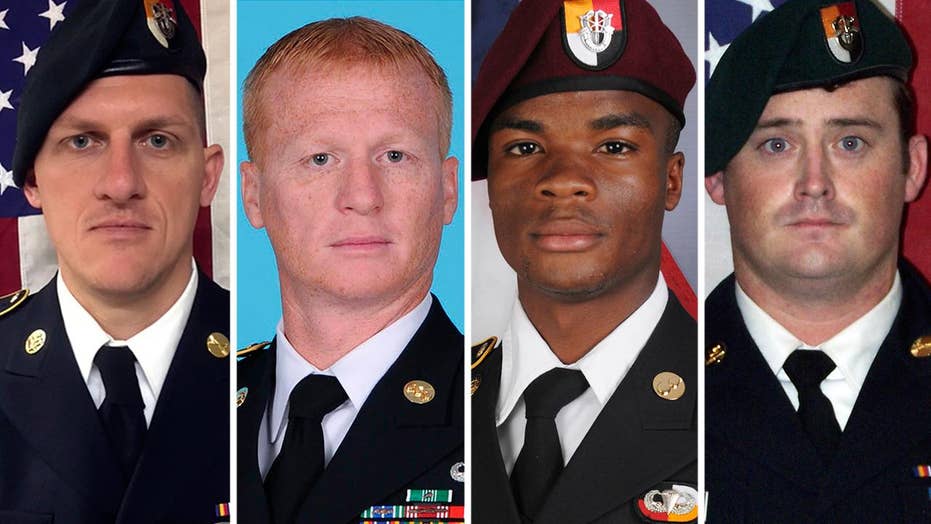 Report released on the death of four American soldiers killed in Niger in an ambush by a group of about 100 ISIS fighters; Lucas Tomlinson reports from the Pentagon.

The ISIS affiliate leader who masterminded a deadly 2017 ambush of U.S. troops in Niger has five million reasons to look over his shoulder.

Abu Walid and other militants belonging to an Islamic State affiliate believed to have gunned down four American soldiers now have $5 million bounties on their heads, the U.S. State Department announced Friday, on the two-year anniversary of the attack.

A pair of $5 million rewards are being offered for information leading to captures: one for Walid, the leader of ISIS in the Greater Sahara, and the other for any of the other killers involved in the ambush.

A 12-member Army special forces unit was accompanying 30 Nigerien forces members on a mission to capture or kill a high-level ISIS leader in West Africa on Oct. 4, 2017, when their convoy was suddenly attacked by more than 100 extremists carrying small arms just outside the village of Tongo Tongo.

The U.S. State Department is offering a $5 million reward for information leading to the capture of Abu Walid, the leader of ISIS in the Greater Sahara. (US State Department)

A Pentagon investigation of the incident released earlier this year detailed a series of "individual, organizational, and institutional failures and deficiencies that contributed to the tragic events" — but there was "no single failure or deficiency" listed to blame.

The report said U.S. forces didn't have time to train together before they deployed and didn't do preparatory battle drills with their Nigerien counterparts. The mission was hastily planned with a lack of attention to detail because of time-sensitive intelligence – received only hours earlier – that could lead to the capture of a high-value target.

Nine officers have been disciplined in the wake of the attack, mainly with letters of reprimand or administrative action. Maj. Gen. Marcus Hicks, who was serving as the commander of special operations forces in Africa at the time it happened, was the most senior officer punished.

The State Department says ISIS in the Greater Sahara emerged when Walid and his followers broke away from an Al Qaeda splinter group.

“Abu Walid first proclaimed his group’s allegiance to ISIS in May 2015, and, in October 2016, ISIS acknowledged his pledge,” the State Department said. “Based primarily in Mali along the Mali-Niger border, ISIS-GS has claimed responsibility for several attacks under Abu Walid’s leadership.”