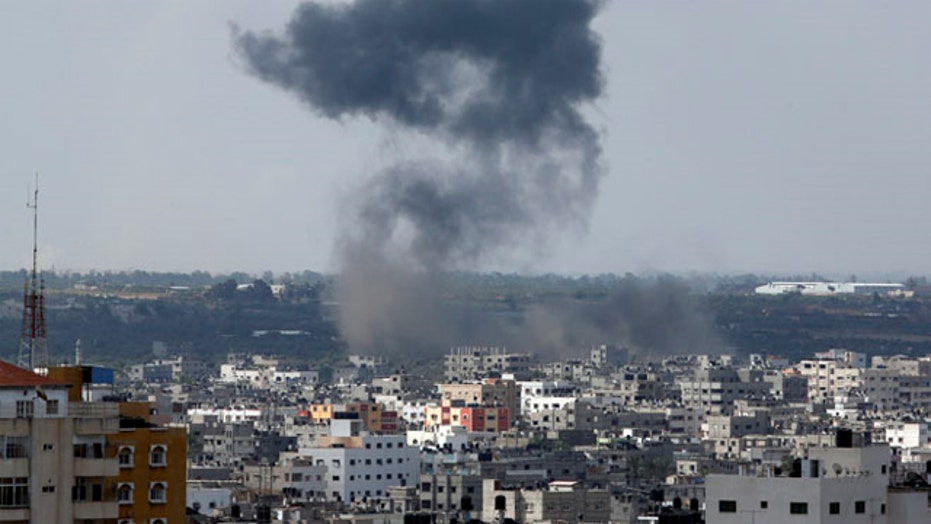 Despite a United Nations call for an immediate cease-fire Monday, Israeli Prime Minister Benjamin Netanyahu gave no indication of a halt in fighting, saying in a nationally televised address that Israeli forces will act “aggressively” and must be prepared for a “prolonged campaign.”

Speaking to his nation Monday night, Netanyahu said Israel intends to dismantle the tunnels between Gaza and Israel to prevent further Hamas infiltration.

"Bravery and determination are needed to fight a terror group which seeks our destruction," Netanyahu said, adding that the operation would not end before the tunnels from the Gaza Strip are neutralized.

"We need to be ready for a prolonged campaign," Netanyahu said. "We will continue to act aggressively and responsibly until the mission is completed to protect our citizens, soldiers and children."

There is no war more just than this," he added.

"His threats do not scare Hamas or the Palestinian people and the occupation will pay the price for the massacres against civilians and children," he said.

Earlier Monday, Netanyahu blasted a United Nations Security Council statement calling for an immediate cease-fire in Gaza, telling U.N. Secretary-General Ban Ki-moon that it recognizes the needs of a “murderous terrorist organization,” and not Israeli security.

During a phone conversation with Ban, Netanyahu said the statement ignores Israel's demands for the demilitarization of the Gaza Strip, a condition already established by previous interim agreements with the Palestinians,  The Jerusalem Post reported.

Israel accepted a UN request for a humanitarian cease-fire three times, he said, while Hamas violated each one.

In New York Sunday, the U.N. Security Council adopted the presidential statement calling for an "immediate and unconditional humanitarian cease-fire" as Muslims began celebrating the Eid al-Fitr holiday marking the end of the fasting month of Ramadan.

The statement calls for both Israel and Hamas "to accept and fully implement the humanitarian cease-fire into the Eid period and beyond." It said this would allow for the delivery of urgently needed assistance. It is the council's strongest statement yet on the Gaza war, but it was not a resolution and therefore not binding.

Drafted by Jordan, the Arab League's representative on the Security Council, the statement’s text "expresses grave concern regarding the deterioration in the situation as a result of the crisis related to Gaza and the loss of civilian lives and casualties," though it does not call for the Israeli military to pull out of the territory.

Netanyahu recommended to Ban that that the international community “work to demilitarize Gaza,” instead of having its money used by Hamas to build terror tunnels to attack Israel.

“They are continuing to fire even now at Israel citizens,” he said. “Israel will continue to deal with the terror tunnels, which is only the first step in demilitarization.”

“The people of Gaza have nowhere to run. They are trapped and besieged on a speck of land. Every area is a civilian area. Every home, every school, every refuge has become a target. The casualty and damage figures also raise serious concerns about proportionality,” Ban told reporters.

President Obama telephoned Netanyahu Sunday to express his concern over the mounting Palestinian casualties. The White House said Obama reiterated that Israel has a right to defend itself and condemned Hamas' rocket attacks.

Obama said a lasting peace will ultimately require a demilitarized Gaza and dismantling of terror groups. The U.S. president also pushed for an immediate, unconditional cease-fire that would allow Israeli and Palestinian civilians to return to normalcy.

Israel's military said it struck two rocket launchers and a rocket manufacturing facility in central and northern Gaza after a rocket hit southern Israel. The rocket caused no damage or injuries.

The military said troops on the ground were continuing work to destroy the cross-border tunnels constructed by Hamas for attacks inside Israel. Israeli forces opened artillery fire on Beit Lahiya in northern Gaza in response to the rocket fired at Ashkelon, said the office of Israel's military spokesman

The Security Council is often deeply divided on Israeli-Palestinian issues, with the United States, Israel's most important ally, often blocking or using its veto on statements and resolutions pressed by the Palestinians and their supporters.

The Gaza health ministry claims the 20-day war has killed more than 1,050 Palestinians, though it is unclear how many are civilians. Israel has lost 52 soldiers, as well as two Israeli civilians and a Thai worker killed by rocket and mortar attacks from Gaza, according to the Israeli military.

Palestinian U.N. Ambassador Riyad Mansour also criticized Monday’s U.N. statement, saying the council should have adopted a strong and legally binding resolution a long time ago demanding an immediate halt to Israel's "aggression," providing the Palestinian people with protection and lifting the siege in the Gaza Strip so goods and people can move freely.

Mansour also expressed hope that Israel will "honor and respect" a new humanitarian cease-fire, which the Palestinians hope will last "for a long time" so all outstanding issues can be addressed, especially the siege.

"You cannot keep 1.8 million Palestinian civilians in the Gaza Strip in this huge prison," he told reporters. "That is a recipe for disaster. It is inhumane, and it has to be stopped and it has to be lifted."

Israel's U.N. Ambassador Ron Prosor sidestepped several questions on whether Israel would accept a new humanitarian cease-fire, but stressed that it had agreed to five cease-fires since the conflict began.

"Every single time the international community called for a cease-fire, we ceased and Hamas fired," he said.

Meanwhile, a strike on a Gaza park killed 10 people Monday, as children played on a swing in the Shati refugee camp on the edge of Gaza City, said Ayman Sahabani, head of the emergency room at nearby Shifa Hospital. Sahabani said nine of the 10 killed at the park were children under the age of 12 and 46 were wounded.

Lt. Col. Peter Lerner, an Israeli army spokesman, denied Israel was involved. "This incident was carried out by Gaza terrorists whose rockets fell short and hit the Shifa Hospital and the Beach (Shati) camp," he said.

Gaza's Interior Ministry spokesman Eyad al-Bozum said he believes that shrapnel found in dead bodies and in the wounded is evidence of Israel's role in the incident.

The Israeli military announced Monday night that five soldiers were killed in two separate incidents today. Staff Sergeant Moshe Davino, 20, of Jerusalem was killed in action inside Gaza, Haaretz reported.  Four others, who were not yet identified, were killed in a mortar attack in Eshkol.