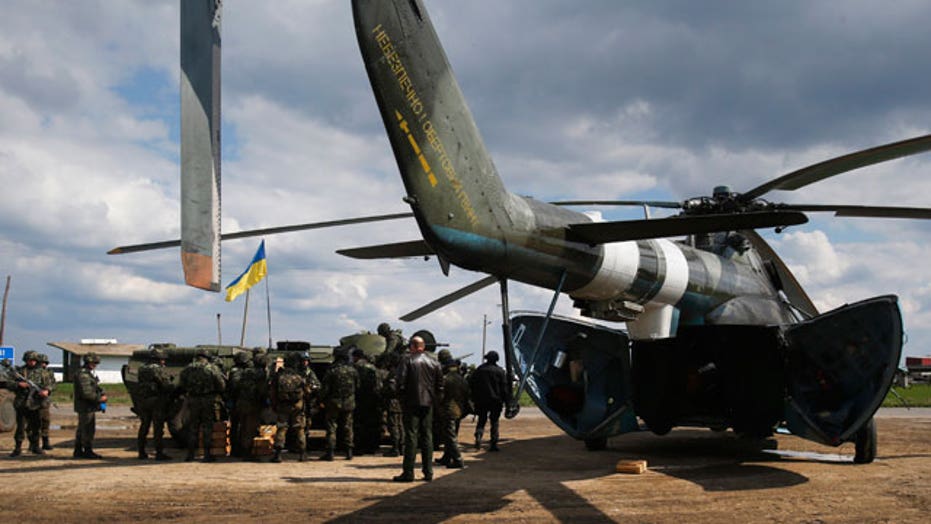 The report released Tuesday said that corruption, a lack of independence of the judiciary and a lack of free elections were among the root causes of popular protests that took place in Ukraine from November to February.

The report also said 121 people -- the majority of them protesters -- died during the protests and there were also numerous accounts of torture and ill-treatment of protesters.

"One gets the impression that the report was fabricated to correspond with conclusions formed in advance," the Russian Foreign Ministry said in a statement, according to Reuters.

The report came as Ukraine's acting president said Tuesday that a military operation to quash a pro-Russian insurgency has started in eastern Ukraine after more than a week of seizures of government building in the latest standoff to grip the country.

Oleksandr Turchynov said the “anti-terrorist” operation began in the early morning hours in the northern Donetsk region, where the majority of the pro-Russian forces are located, The Wall Street Journal reported.

Turchynov said army troops have since restored control over a small airport in eastern Ukraine that had been occupied by pro-Russian militiamen.

Heavy gunfire rang out at the airport near Kramatorsk on Tuesday, but there was no immediate confirmation of any casualties.

“Overnight, an anti-terrorist operation began in the north of Donetsk," he said. "But it will be phased, responsible and balanced. The purpose of the actions, I stress once again, is to protect the citizens of Ukraine,” Turchynov told Ukraine’s parliament, according to Interfax.

"The plans of the Russian Federation were and remain brutal. They want not only for Donbass (Donetsk region), but for the whole south and east of Ukraine to be engulfed by fire," Turchynov continued. The aim of the operation is to "defend the citizens of Ukraine, to stop terror, stop crime and stop attempts to tear our country into pieces," he said.

Pro-Russian forces, over the past 10 days, have taken over more than a dozen government offices in 10 eastern Ukraine cities, with most of the seizures following the same pattern. Aggressive gangs, sometimes carrying firearms and wearing military fatigues, storm the buildings. The Ukrainian flag is replaced with a Russian one.

The Interior Ministry in the Donetsk region said the police station in Kramatorsk that had been seized by pro-Russian gunmen was "liberated" Tuesday.

The insurgents are demanding broader autonomy and closer ties with Russia. The central government has so far been unable to rein in the separatists, as many of the local security forces have switched to their side.

Roads into Slovyansk, a city some 100 miles from the Russian border that has come under ever more secure control of the gunmen since Saturday, were dotted with checkpoints. One at the entrance into town was waving a Russian flag. Another bore a sign reading: "If we don't do it, nobody will."

One video posted online late Monday showed a hapless Ukrainian tank stuck in the mud in a field reportedly outside Slovyansk.  Local residents chased it on foot, trying to stop it, shouting "Who are you going to fire at?"

Ukraine's security services said Tuesday it has identified a Russian foreign intelligence agent who is running pro-Russian operations in Slovyansk. It named him as Igor Strelkov, a man they said also coordinated Russian troops in Crimea during the seizure of military facilities on the peninsula that used to belong to Ukraine.

In the city of Horlivka, the local police station has been seized by separatists. Outside, a sign pinned to the wall of tires listed items required by protesters, including blankets, drinking water and tape to cover up windows smashed during the storming of the building. Anatoly Zhurov, a 53-year-old Horlivka resident participating in the defense of the site, said their goal was to resist the government in Kiev.

Russia strongly warned Kiev against using force against the separatists, saying Moscow could walk out of an international conference devoted to the Ukrainian crisis scheduled for Thursday.

"If force is used in southeastern Ukraine, chances of holding this meeting in Geneva would be undermined," Russian Foreign Minister Sergei Lavrov said at a press conference Tuesday after talks with Chinese Foreign Minster Wang Yi.

If no progress is made at the conference, European Union leaders could meet as early as next week to decide on tighter sanctions on Russia.

In Kiev, two pro-Russian politicians were attacked by pro-Western activists. Oleh Tsaryov, a pro-Russian lawmaker and a candidate in the May 25 presidential elections, was beaten by dozens of enraged activists in the early hours of Tuesday as he was leaving a television studio. The activists pelted him with eggs, shouted insults and then assaulted him.

Tsaryov's press service said in a statement that he was "brutally beaten."

Another Russian-leaning politician and presidential hopeful, Mikhaylo Dobkin, was sprayed with a green disinfectant and had flour thrown at him late Monday.

Moscow accused Kiev authorities of condoning such radicalism and said the attacks proved that presidential elections will not be fair or democratic.

Russia has tens of thousands of troops massed along Ukraine's eastern border. Western governments accuse Moscow of fueling the unrest and worry that the specter of bloodshed could be used as a pretext for a Russian invasion, in a repeat of events in Crimea a few weeks ago.

Witnesses have reported multiple sightings of camouflaged militia similar to those seen in Crimea before that peninsula's annexation and which are widely believed to have been following order from Moscow.

"Blood has once again been spilt in Ukraine. The country is on the brink of civil war,'' he said in a statement posted on his Facebook page.

Russia annexed the Crimean peninsula last month after local residents voted overwhelming to secede from Ukraine and seek to join Russia in a hastily called referendum.

In a sign that Ukraine's economic situation is becoming ever more dire, its central bank increased its benchmark interest rate by a whopping 7 percent to 14.5 percent. The move aims to contain the risk of inflation by supporting the currency, which has been falling to record lows in recent days. A dropping currency fuels inflation by boosting the cost of imports.

However, hiking interest rates can cause collateral damage to the economy by making loans and mortgages more expensive to residents and businesses.

Ukraine has relied on cheap gas supplies from Russia for years. Moscow raised the gas prices for Kiev in the past weeks, leaving Ukraine scrambling to pay the mounting gas bills as well as past bills that Russian President Vladimir Putin now says adds up to over $35 billion.