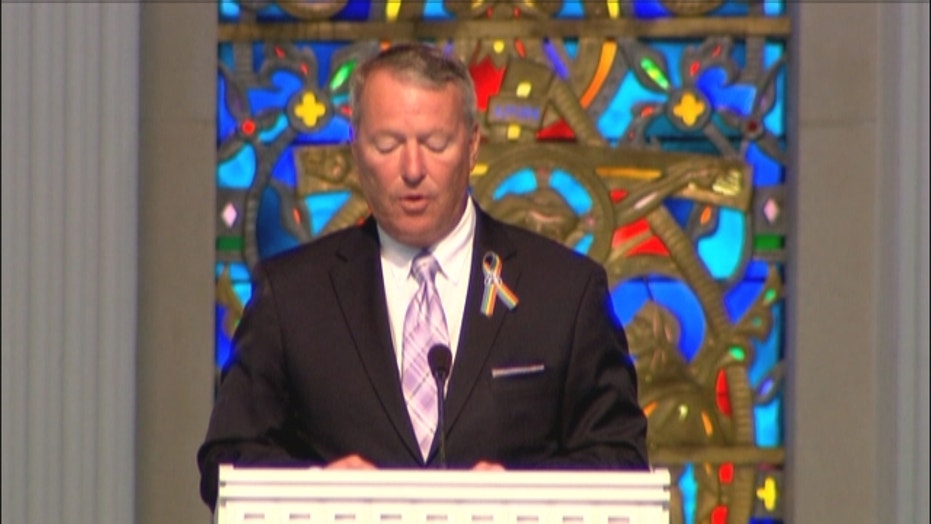 Brenda Lee Marquez-McCool was more than a mom of 11, she was also “a warrior,” according to her son Farrell Marshall Jr., who spoke at his mother’s funeral on Monday along with his ten siblings.

With photos of their mother streaming on television screens in the sanctuary, Marquez-McCool’s children talked about their mother’s bravery fighting cancer twice, her love of dancing, her work training soldiers in tactical simulations, her degree in criminal justice, and her licenses in cosmetology and as a health insurance agent.

Marquez-McCool, 49, was out dancing with her son, Isaiah Henderson,  when she was shot and killed by by ISIS-inspired murderer, Omar Mateena at the Pulse nightclub in Orlando, on June 12, along with 48 others.

According to family members she ordered her son to get down, and then stepped in front of him. She was shot and told him to escape instead of remaining behind to help her.

Orlando Mayor Buddy Dyer said at the funeral that her act of bravery made him proud to live in Orlando, the Mayor also declared a day of mourning in honor of the Brooklyn-born hero.

"I never thought her life would be ended right in front of my eyes," her son said at the funeral, as reported by the Orlando Sentinel.

Marquez-McCool survived two bouts of leukemia. She was loved by many, and called “mom” by countless people who were not her children.

Following the service, white balloons were released in Marquez-McCool’s honor as the hearse that carried her body drove to the cemetery.

Her brother said his sister’s death leaves a whole in his heart, but was sure there’d be more dancing in heaven with Marquez-McCool there.

Her son, Isaiah, told mourners at the First United Methodist Church in Orlando, she was, “the best mom.”

“I never thought her life would end right in front of my eyes," he continued. "She was the mom everyone wanted. She loved everyone deeply no matter what."