Investigation into the fate of Saudi journalist intensifies

The Times report, which cited a senior official in the Ankara government, said Turkish authorities believe Khashoggi was murdered on orders from "the highest levels of the royal court" in Riyadh. The official compared the operation to the 1993 movie "Pulp Fiction."

Khashoggi, 59, was last seen entering the Saudi consulate through the main entrance on Oct. 2. Saudi officials insisted he left the building through another exit, but have not provided public evidence to prove it.

Turkish officials have not stated how they determined that Khashoggi was killed at the consulate. Turkey has said it will search the consulate for signs of what happened to Khashoggi, but has not said when it will do so. 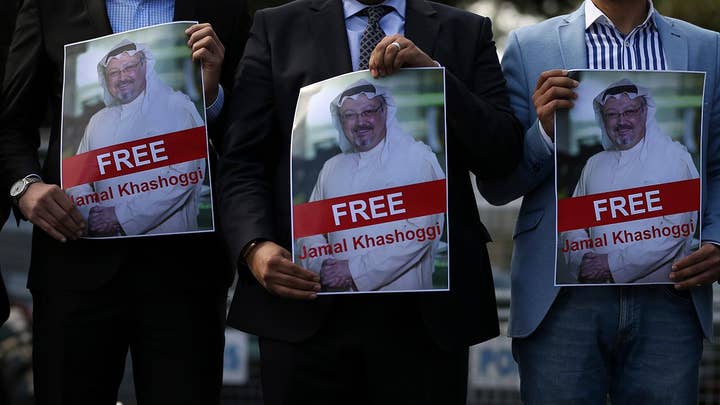 The Post, citing two people with knowledge of the investigation, reported Tuesday that a 15-member team of men who had arrived from Saudi Arabia was waiting for Khashoggi to arrive at the consulate. Later that same day, the men reportedly left Istanbul on flights bound for Cairo and Dubai.

Khashoggi had gone to the consulate in Istanbul for paperwork to marry his Turkish fiancée. He had been living in the United States since last year, in self-imposed exile, in part due to the rise of Saudi Crown Prince Mohammed bin Salman, who has shown little tolerance for criticism.

As a contributor to the Post, Khashoggi has written extensively about Saudi Arabia, including criticism of its war in Yemen, its recent diplomatic spat with Canada and its arrest of women's rights activists after the lifting of a ban on women driving. Those policies all have been seen as initiatives of the crown prince, who also has presided over a roundup of activists and businessmen.

In an op-ed published by the Post late Tuesday, Khashoggi's fiancée wrote that the Oct. 2 visit to the Saudi consulate was Khashoggi's second in the space of a few days. She said he had been "somewhat concerned that he could be in danger" when making his first visit Sept. 28 but had been encouraged by a "positive" first meeting with consular staff.

"He walked into the consulate of Saudi Arabia, his native country, without doubting he would be safe there," wrote Hatice Cengiz, who added that she became concerned when he did not return from the consulate after three hours. Cengiz called on President Trump and first lady Melania Trump to "help shed light" on Khashoggi's disappearance. She also asked the Saudi government to release closed-circuit TV footage from inside the consulate to shed light on what happened to her fiancé.

I don’t know how I can keep living if he was abducted or killed in Turkey," Cengiz wrote. "Although my hope slowly fades away each passing day, I remain confident that Jamal is still alive."

Earlier Tuesday, Post CEO and Publisher Fred Ryan called on both Riyadh and Ankara to release more information about Khashoggi's whereabouts, saying: "Silence, denials and delays are not acceptable."