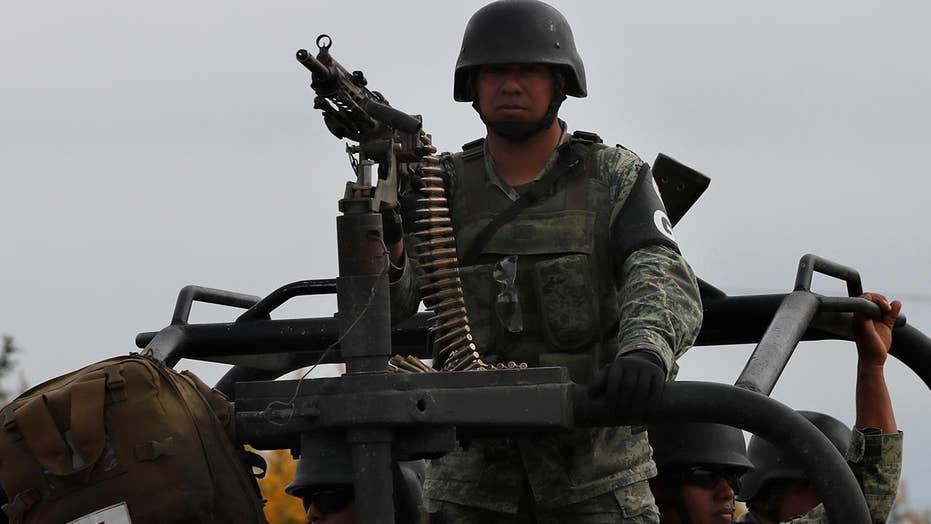 With a sharp murder rate increase in Mexico, is there more need for border security?

The homicide count in Mexico is on pace to reach its highest overall annual total since the country’s government started keeping track in 1997, with new statistics showing nearly 100 people are killed each day.

Figures from Mexico’s Secretary General of National Public Safety state that there have been 29,414 homicides there so far in 2019 – up from 28,869 over the same period last year.

In 2018, there were a total of 36,685 murders in Mexico -- the most since the office started gathering data on the crime more than two decades ago. This year, the number of homicides is expected to surpass that figure.

The coffin that contains the remains of 12-year-old Howard Jacob Miller Jr. is lowered into a grave at the cemetery in Colonia Le Baron, Mexico, on Nov. 8, during a burial service for Rhonita Miller and four of her young children who were murdered by drug cartel gunmen. (AP)

Figures released this week state that June has been the deadliest month in Mexico this year with 3,076 murders – an average of about 102 per day.

As of October, that rate declined to around 94 per day.

The release of the figures comes at a time when Mexico's president, Andres Manuel Lopez Obrador, is facing growing criticism for his government’s "hugs, not bullets" policy of not using violence when fighting violent drug cartels.

The country made international headlines in early November after nine Americans were gunned down in a drug cartel ambush.

The three women and six children -- all members of dual-citizen families that lived in La Mora, a decades-old settlement in the Sonora State founded as part of an offshoot of the Church of Jesus Christ of Latter-day Saints -- were on their way to see relatives in the U.S when they were targeted about 70 miles south of Douglas, Ariz. by cartel members.

“It was lamentable, painful because children died, but do we want to resolve the problem the same way (as previous administrations)? By declaring war?” Obrador asked during a media briefing in the days afterward. “That, in the case of our country, showed that it does not work. That was a failure. It caused more violence.”

The president has used the catchy phrase “hugs not bullets” – or “abrazos, no balazos” in Spanish – in his promise to clear out violent drug cartels, not by waging war, but instead changing communities by tackling what he said is at the root of the problem: extreme poverty.

“We are carrying out a different policy because the policy that was applied during 36 years was a resounding failure and it caused a lot of damage, a lot of sadness, a lot of deaths, a lot of losses for Mexicans,” Obrador said recently. “We will not continue with the same and we will show that our proposal works, despite it not being easy. We are confident that we will achieve good results.”

Security experts said that the president’s strategy does not directly address the terrifying power of the country’s criminal underworld.