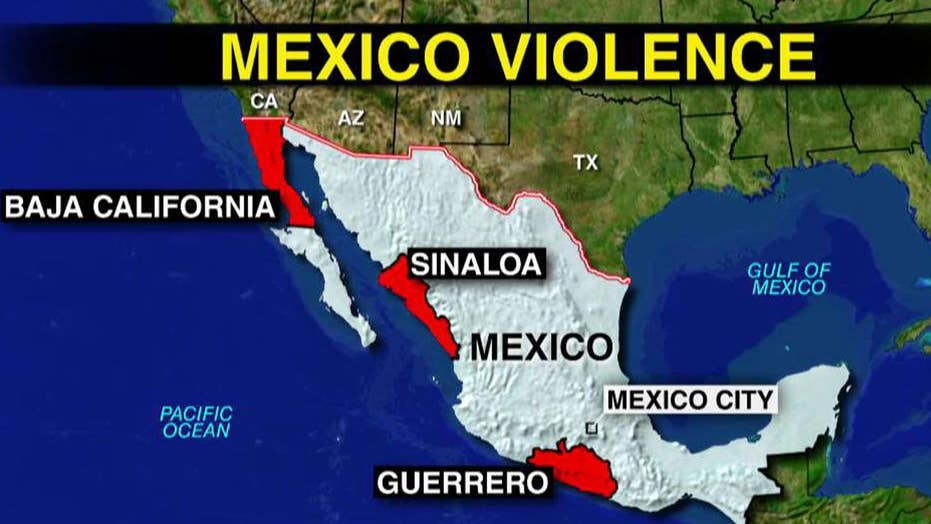 May marks deadliest month in Mexico in decades

In January, a lone gunman entered the trendy Blue Parrot nightclub in the upscale Mexican resort town of Playa del Carmen and opened fire. Chaos ensued as the crowd scrambled for cover as the gunman traded shots with another man inside the club and security working the annual BPM music festival tried to suppress the melee.

When the bullets stopped flying in what is believed to be a drug cartel-related gunfight, five people were dead – including a Canadian bodyguard caught in the crossfire and an American teenager who was trampled to death as panicked partiers fled the club.

On Sunday, sunbathing tourists were forced to take cover on the white sand beaches of Los Cabos – a popular getaway at the southern tip of Mexico's Baja California Peninsula – as gunmen unloaded and left three people dead.

“We’re in a period of disequilibrium and it will take some time to get back to equilibrium,” Christopher Wilson, the deputy director of the Mexico Institute at the Woodrow Wilson International Center for Scholars, told Fox News.

In Quintana Roo, the Mexican state that is home to both Cancún and Playa del Carmen, the government has recorded 134 homicides this year, which is nearly equal to the 165 the state saw in the entirety of 2016. The Benito Juárez municipality, which includes Cancún, has already surpassed last year’s homicide total of 89 when it ended June with 95 murders and in nearby Solidaridad has registered 21 slaying through June, closing in on last year’s total of 26. In Los Cabos, homicides in the famed beach area are up 400 percent this year.

The U.S State Department, which last updated its Travel Warning for Mexico last December, cautioned travelers of the dangers of travel in Baja California, but so far has no advisory for Quintana Roo.

Mexico’s drug war, which began in earnest in 2006 when then-President Felipe Calderón declared an all-out military offensive on the country’s narcrotraffickers, has left at least 200,000 dead. While current President Enrique Peña Nieto came into office in 2012 at time when violence was on the decline, the bloodshed continues and in June the country saw a record number of killings with the 2,566 homicides victims being the most in a month since the Mexican government started releasing that data in 2014.

The overall rise in violence in Mexico is due to the extradition of “Chapo” Guzmán.

— Christopher Wilson, deputy director of the Mexico Institute at the Woodrow Wilson Center

The skyrocketing demand for heroin in the United States due to the opioid crisis – cartels are believed to make somewhere better $19 and $29 billion annually from the U.S. drug market – and the splintering of major drug trafficking organizations following the arrests or deaths of their leaders are believed to be the main factors for the spike in violence in places like Cancún and Los Cabos.

The arrest and extradition of Joaquín “El Chapo” Guzmán to the United States has created a massive power struggle within the Sinaloa Cartel, once the country’s largest and most powerful drug trafficking organization, and is believed to be the main cause of violence along Mexico’s Pacific coast. Disparate factions of the Sinaloa Cartel, along the rising Cartel Jalisco Nuevo Generación, are also known to be active in Quintana Roo.

“The overall rise in violence in Mexico is due to the extradition of “Chapo” Guzmán,” Wilson said. “Simply because of internal criminal group dynamics there is a natural waxing and waning of violence. The one constant is that there is no governmental structure to respond effectively and until that is implemented these types of flare-ups will continue to happen.”

Mexico’s tourism officials are undeniably concerned with the spike in killings and the accompanying bad press. Tourism is the fourth largest source of foreign exchange for Mexico, with visitors doling out an estimated $20 billion a year to visit the country’s beaches, clubs and famed archeological ruins.

FILE - In this March 15, 2012 file photo, navy sailors patrol as people sun bathe on the beach during spring break in Cancun, Mexico. While American tourism to Mexico slipped a few percentage points last year, the country remains by far the biggest tourist destination for Americans, according to annual survey of bookings by the largest travel agencies. (AP Photo/Israel Leal, File) (AP Photo/Israel Leal)

Drug war violence has already turned one of the country’s preeminent tourist hotspots, Acapulco, into one of the country’s most dangerous cities with dead bodies being hung from bridges, human heads being left in coolers outside city hall and shootouts occurring at posh hotels.

At least in regards to Cancún and other Caribbean resort towns, however, both Mexican officials and outside experts attest that while violent crime may be on the rise there is little chance of it reaching the endemic levels seen in Acapulco and other towns along the country’s Pacific Coast – home to the traditional trafficking routes used by the cartels.

"Tourist security has been a constant priority for the authorities," Daniel Flota Ocampo, director of Riviera Maya Tourist Promotion, told USA Today, adding that the violence is between "criminal groups settling scores among themselves" and that authorities are taking action against them. He also noted that the majority of the violence has occurred far from the all-inclusive resorts frequented by tourists.

For now, it appears that the violence has not deterred tourists from vacationing along Mexico’s coasts. Occupancy rates at hotels in Cancún are at 90 percent and 74 percent in Los Cabos.