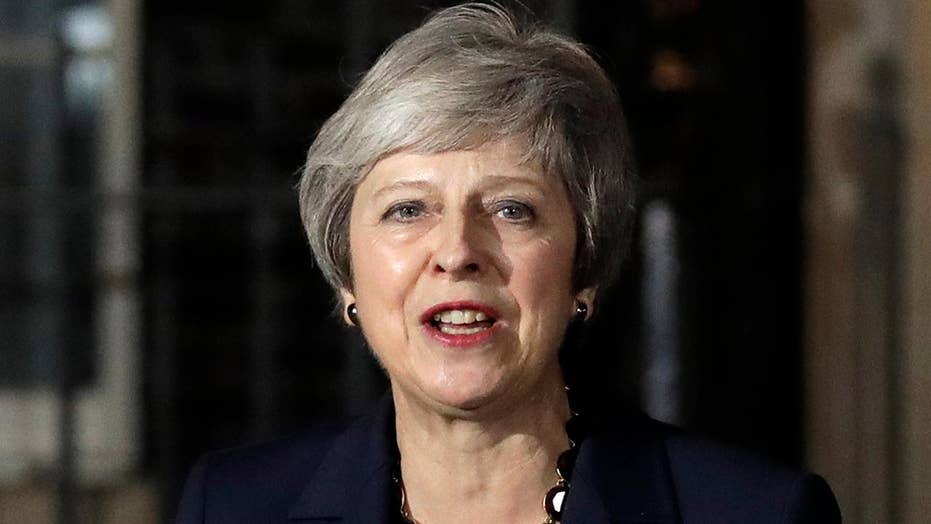 May's plan to leave EU met with hostility at Parliament

Brexit draft agreement sets the stage for a battle in the U.K. prime minister's Conservative Party; Greg Palkot breaks down the details from London.

British Prime Minister Theresa May said Wednesday that her Cabinet supported a draft agreement laying out the terms of Great Britain's divorce from the European Union, setting the stage for a battle royale within her Conservative Party and the House of Commons.

"This is a decisive step which allows us to move on and finalize the deal in the days ahead," said May, who spoke in front of 10 Downing Street following a five-hour Cabinet meeting. "I firmly believe, with my head and my heart that this is a decision which is in the best interests of the United Kingdom," she added.

May referred to her Cabinet's support as a "collective agreement," but multiple reports indicated that at least 10 Cabinet ministers spoke against the deal. That's a worrying indicator for May, who will likely require support from opposition Labour members of Parliament to win final approval of the agreement.

Pro-Brexit lawmakers in May's Conservative Party say the agreement will leave Britain tethered to the EU after it departs and unable to forge an independent trade policy. In a warning to her opponents, May said the choice was between her deal, "or leave with no deal; or no Brexit at all."

Former Foreign Secretary Boris Johnson, who resigned earlier this year amid disagreements with May about Brexit strategy, told ITV News Wednesday that the draft agreement was "vassal state stuff."

"We are going to be kept in a kind of economic and political captivity, unable to shape EU legislation and regulation, but having to accept it," Johnson said. " ... I cannot see how, in a month of Sundays, that can be acceptable to anybody who campaigned for Brexit. I can't see how it would be acceptable to anybody who believes in self-government for this country, let alone the Union between Great Britain and Northern Ireland."

Leading Euroskeptic Conservative legislator Jacob Rees-Mogg urged his colleagues to vote against the deal, saying it "will lock us into an EU customs union and EU laws. This will prevent us pursuing a U.K. trade policy based around our priorities and economy."

Nigel Farage, former leader of the pro-Brexit UK Independence Party (UKIP) tweeted Thursday evening: "Any cabinet member who is a genuine Brexiteer must now resign or never be trusted again, this is the worst deal in history."

Scottish First Minister Nicola Sturgeon, who opposed the 2016 referendum to leave the EU, said the proposed deal "would be a bad one for Scotland, taking us out of a single market eight times the size of the UK market alone and posing a huge threat to jobs, investment and living standards

May's supporters argue that the deal is the best on offer, and the alternatives are a chaotic "no-deal" Brexit that would cause massive disruption to people and businesses or a general election that could see the Conservative government replaced by Labour, making far-left leader Jeremy Corbyn Prime Minister.

Former Foreign Secretary William Hague warned "ardent Brexiteers" that if they shoot down May's deal, it could lead to a change of government and a new referendum and "Brexit might never happen at all."

In addition to Parliament, leaders of the 28-nation EU must also approve the deal. EU chief negotiator Michel Barnier declared there had been "decisive progress," signaling that EU leaders can convene a summit to approve the deal, probably later his month. If all sides approve, the agreement would come into effect on March 29 of next year.

Crucially, Barnier said that "we have now found a solution together with the U.K. to avoid a hard border on the island of Ireland."

The main obstacle to a withdrawal agreement has long been how to ensure there are no customs posts or other checks along the border between the U.K.'s Northern Ireland and EU member Ireland after Brexit. Britain and the EU agree that there must be no barriers that could disrupt businesses and residents on either side of the border and undermine Northern Ireland's hard-won peace process.

The solution in the agreement involves a "single EU-U.K. customs territory," to eliminate the need for border checks.

As part of the agreement, the U.K. will agree to follow EU rules in areas like animal welfare, environmental standards and workplace protections -- another source of anger for Brexiteers, who say Britain should be free to set its own rules.

Northern Ireland's Democratic Unionist Party, which props up May's minority government, has said it will oppose any deal that leaves Northern Ireland subject to different rules to the rest of the U.K. after Brexit.

"We could not as unionists support a deal that broke up the United Kingdom," DUP leader Arlene Foster said.