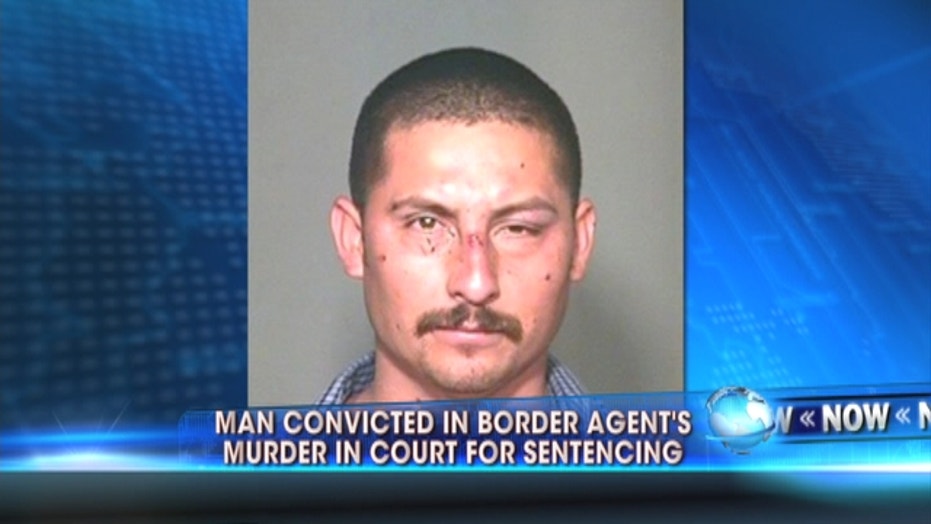 Bryan Terry's Family To Speak Out At Killer's Sentencing

A Mexican man will be sentenced in federal court in the killing of a U.S. Border Patrol agent Brian Terry whose death revealed a botched law enforcement sting in which agents lost track of hundreds of guns sold to criminals.

PHOENIX (AP) – A Mexican man will be sentenced in federal court Monday in the killing of a U.S. Border Patrol agent whose death revealed a botched law enforcement sting in which agents lost track of hundreds of guns sold to criminals.

Manuel Osorio-Arellanes is the only defendant to face justice in the U.S. in the death of agent Brian Terry, whose family is traveling to Arizona to attend the sentencing hearing. Prosecutors are seeking 30 years in prison for Osorio-Arellanes, who was wounded in the shootout on Dec. 14, 2010.

The gunbattle brought attention to the "Fast and Furious" operation in which agents from the Bureau of Alcohol, Tobacco, Firearms and Explosives allowed suspected gun smugglers to purchase weapons from Phoenix-area shops with the intention of tracking them to Mexican drug cartels. Agents allowed the purchase of 2,000 guns, but then lost track of more than 1,400 of them. Two of those guns were found at the scene of Terry's murder in southern Arizona, and dozens of others were found at crime scenes in Mexico.

The Fast and Furious operation led to the resignation of top officials and resulted in the country's chief law enforcement officer being held in contempt after he refused to divulge documents for a congressional investigation. The U.S. attorney assigned to Arizona also resigned following his involvement in the sting.

Since the operation came to light, a congressional committee has launched an investigation that was stifled after President Barack Obama invoked executive privilege, allowing U.S. Attorney General Eric Holder to withhold documents the committee sought. The House Oversight and Government Reform Committee held Holder in contempt and sued for the documents.

Still, the government has revealed little of what actually happened that night and its connection to Fast and Furious.

For example, authorities have not definitively linked the two guns from the crime scene to the bullet that killed Terry. Nor is the fate clear about two other suspects in Mexican custody who authorities hope will be extradited to the U.S. The U.S. attorney's office that is prosecuting the case has refused comment about the status of the suspects.

Terry's family members plan to visit the location where he was killed in what will be their first time at the scene of the crime.

The Terry family has been a vocal critic of the government over the operation, and some of them believe authorities are covering something up. Terry's stepmother, Carolyn Terry, said the sentencing of Osorio-Arellanes won't give the family any closure.

"We don't know what happened to him out there that night," she said.

An ATF spokesman declined to answer questions but provided a statement in which the agency said it "accepted responsibility for the mistakes made in the Fast and Furious investigation and at the Attorney General's direction we have taken appropriate and decisive action to ensure that these errors will not be repeated."

Osorio-Arellanes, one of five men involved in the shootout with border agents patrolling the area, pleaded guilty to first-degree murder. The men had sneaked into the country to rob marijuana smugglers along the Mexico-Arizona border, authorities said. Two other suspects have been charged and are in Mexican custody. The other two are fugitives.

Authorities at the scene of the shootout found two rifles purchased by a gun-smuggling ring that was being monitored by ATF agents. Members of that ring have pleaded guilty to federal charges.

The shootout erupted as Osorio-Arellanes and others walked in a single-file line toward a group of agents, according an account given by prosecutors.

Agents sitting atop a small hill and using night-vision gear could see that rip-off crew members were carrying rifles and waited until the men were close before an agent yelled "police" in Spanish. The gunmen turned toward the agents and started to fire, setting off an exchange of gunfire that killed Terry in a canyon near the city of Nogales.

"I'm hit," Terry told fellow agents, noting that he couldn't feel his legs. Terry lost consciousness and died at the scene from a single gunshot wound.

Prosecutors recounted details of the shooting in a court record filed in advance of Monday's sentencing. The filing was accompanied by written accounts from three Border Patrol agents who were with Terry as he died.

Clay Hernandez, Osorio-Arellanes' lawyer, has not returned a call seeking comment. Osorio-Arellanes has maintained he was not the gunman who killed Terry, and prosecutors say the evidence supports his claim. But they say he is still liable for the killing because the murder occurred during an attempted robbery in which he was a voluntary participant.