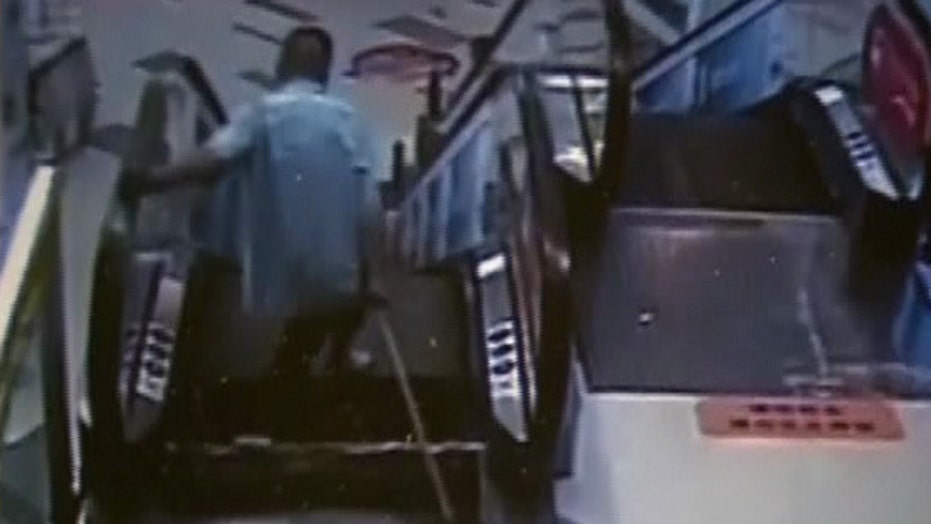 Man's foot gets caught in escalator at Shanghai mall

A week after the death of a woman in an escalator accident in China made international headlines, Chinese TV has released video of a maintenance man who lost his foot in an escalator at a Shanghai mall over the weekend.

Security camera video provided by local Chinese network Dragon TV shows the man’s foot getting caught on the escalator, and the emergency crews who rushed to save him Saturday.

The footage first shows two people jumping over the top platform of the escalator just before a janitor-- identified only with the surname Zhang—walked over to mop its steps.

Local firefighters struggled for at least 20 minutes to free Zhang from the escalator's hold, before carrying him out of the mall on a stretcher, Dragon TV said, according to a Reuters report.

The escalator, which was manufactured in 2004, has been closed off from the public, CCTV said. Authorities from the Market Monitoring Bureau in Shanghai said they are investigating the incident.

On July 27, a Chinese woman became trapped in a shopping mall escalator in Jingzhou, but was able to save her toddler son before she died. The woman -- identified in media reports as Xiang Liujuan, 30 -- is shown reaching the top of the escalator when the section of landing platform she had stepped onto suddenly collapses, trapping her inside the still-moving machinery.

She was able to push her son, 2, into the arms of bystanders, saving him from harm. Although witnesses tried to pull her to safety, she fell deeper into the escalator and died. That accident was also caught on surveillance camera.