Reporter injured during violent protests on the ground in Venezuela

A Venezuelan reporter is recovering after a riot control grenade exploded at his feet; Steve Harrigan has the details entering day three of unrest.

The notion of masked men on no-license-plate motorcycles shooting down citizens to rob them for their bread, emptying magazines of bullets into crowds of anti-government protesters or lurking at the door with threats for an outspoken journalist has become commonplace in Venezuela.

These groups are known as the collectives - or “collectivos” in Spanish - and function as carry out the dirty work for embattled President Nicolas Maduro.

But aside from aiding Maduro to stay in power in the face of growing opposition and international condemnation, many of the groups are also intent of waging their own campaigns to win back – or sustain – the support of Venezuela’s most vulnerable.

“A small majority of the population still believe and support Maduro’s regime because they trust and believe in Chavez’s ideology. Governments before Chavez never took into account those poor people living in the barrios and rural areas,” James Durling, Operations Director for the Colombia-based security firm, D4C Projects, told Fox News. “Chavez gave them active participation in politics and they feel that they are important to the regime, so they trust in them because they are loyal to what they believe is good for the country.”

Inspired by the leftist urban rebel gangs of the Cuban Revolution and founded more than 50 years ago, the various collectivo groups financed their “social justice” missions mostly through criminal activity and robbing banks. After coming to power in 1999, then President Hugo Chavez armed them as “guardians of the revolution” but in the ensuing years they went increasingly rogue, morphing into brutal bandits. 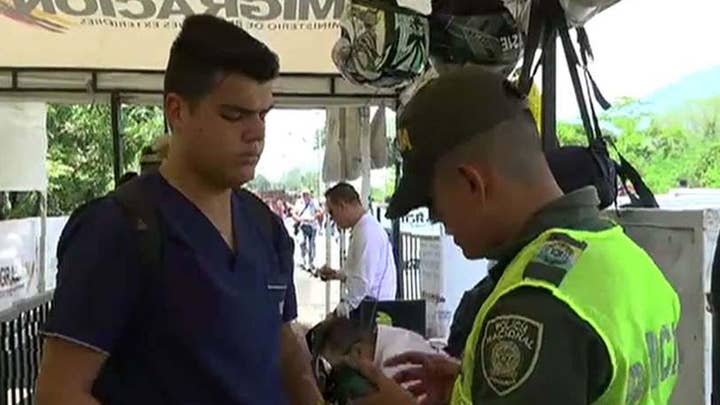 Disguised by masks and dark clothing, their identities not known, collectivos publicly reprimand accusations of violence. The collectivos themselves are divided up into groups with different powers and functions.

“They are criminals, hardcore Chavistas on the frontlines as the armed defense of Maduro’s regime. The most powerful Collectivos are known as the Carapaicas, Tupamaros, La Piedrita, Alexis Vive, and the Gran Polo Patriotico,” said Johan Obdola, president of Latin America-focused global intelligence and security firm IOSI and former Venezuelan counter-narcotics official. “Their biggest numbers are in the main cities of Venezuela – Caracas, Valencia, Maracay, and Maracaibo.”

According to Obdola, they initially received training from Colombian rebel group FARC, then eventually the Venezuelan Army and National Guard, but more recently the Cuban military.

Opposition leader Juan Guaidó smiles at supporters as he arrives for a press conference in Caracas, Venezuela, Friday, May 3, 2019.  (AP)

While hard data is impossible to obtain, some analysts estimate that the collectivos maintain control of as much as 30 percent of Venezuela’s towns and cities and endeavor to augment that at any outlay. The exact number of members too is murky, yet analysts estimate there could be anywhere from 10,000 to 100,000 of these irregular gang members operating with impunity throughout the impoverished country.

And it’s not all about crime, drug trafficking, methodical abductions, and stealing. Many of the collectivos, sources on the ground tell Fox News, continue to operate something of a “heart and minds” game to try and win over the support of the most vulnerable.

“One of these things happening is that such armed groups are seeking to gain the sympathy of the people who live in the places, even when they are creating a war environment,” said one Venezuelan humanitarian researcher, who can only be identified as Martina, who works on the border near Colombia.

Around a year ago, some from the San Antonio area recalled, collectivos joined forces with local guerilla groups to help dispose of the trash that had accumulated in the streets as the economic meltdown saw the shutting down of basic services.

Such pro-Maduro outfits are also quietly permitted by the government to be involved in, and sometimes participate in the delivery of the infamous CLAP food aid boxes distributed under the socialism umbrella, Martina noted.

“It is to generate sympathy, sometimes they will deliver notebooks or propaganda magazines,” she continued. “And even those who don’t have sympathy for them, have come to understand it simply as a way of life. They are trying to survive.

Indeed, for many, they are simply a staple of order in an ever-fragmenting society.

For Maduro, who the U.S. and other countries mandate is no longer a legitimate official, they are something of a lifeline. For more than three years, the socialist policies of the Venezuelan regime have seen the once oil-rich nation erode into a dire humanitarian catastrophe.

“I admire them. They are organizations created for the good of the community. The collectives work for society, for the sick, for peace, and against crime,” Maduro declared last week, just hours after members opened fire on rallying anti-government Venezuelans. “They have been around 20 years as a form of organization for the people.”