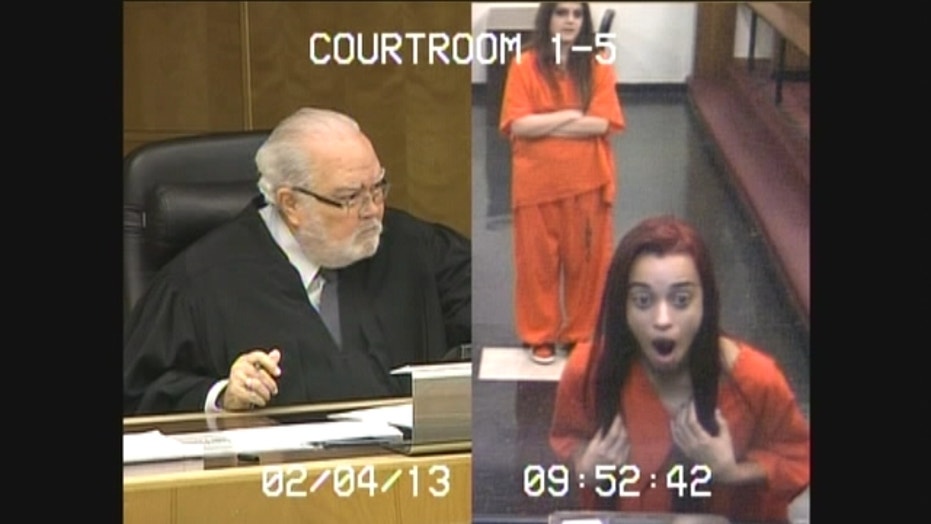 Woman sentenced to 30 days in jail after flipping off a judge during a hearing.

It was Penelope Soto's turn to face the judge in what seemed like a fairly routine South Florida county court appearance on prescription drug charges.

But what took place next in the Miami courtroom was anything but mundane.

When the 18-year-old was asked by Judge Jorge Rodriguez-Chomat if she was high on drugs at that moment, Soto literally laughed at the question

The move miffed the judge.

“We're not in a club,” the judge said, reacting to Soto’s seemingly erratic behavior, as reported by WSPN, the Fox TV affiliate in Miami. "Be serious about it."

Then he ordered that she be held on $5,000 bail. But Soto apparently still couldn't contain herself and laughed again, telling the judge “adios” as she began to walk away.

Now, the judge was a bit more than miffed.

Soto didn't get too far before, in an unusual move since he had already issued his decision, Rodriguez-Chomat called the teenager back.

Her insolence had just earned her bail increased to $10,000, he informed her.

Soto's jaw literally dropped. Astonished, she asked the judge: "Are you serious?"

The judge is apparently not one to kid around, at least not when dealing with teenagers playing around when they're in big trouble.

"I am serious," Rodriguez-Chomat told Soto.

Now it was the teenager's turn to be angry. Obviously unhappy with the turn of events, once again she began to walk away -- not quietly, showering the judge with expletives and throwing up her middle finger.

But no. The war of words was on.

Rodriguez-Chomat wasn't quite ready to let the apparent insolent teenager have the last word.

"You said [expletive] me?" the judge asked Soto.

Well, at least she was honest -- defiant, but honest.

But, honesty aside, by that point, the judge had lost all patience with Soto. He was clearly done with her and moved to end the exchange.

He ordered her in contempt of court and sentenced her to a month in jail.

Was the teen willing to risk spending more time behind bars by talking back?

No -- apparently, she had learned her lesson for the day.

"OK, that's fine,” she replied, walking away for good.