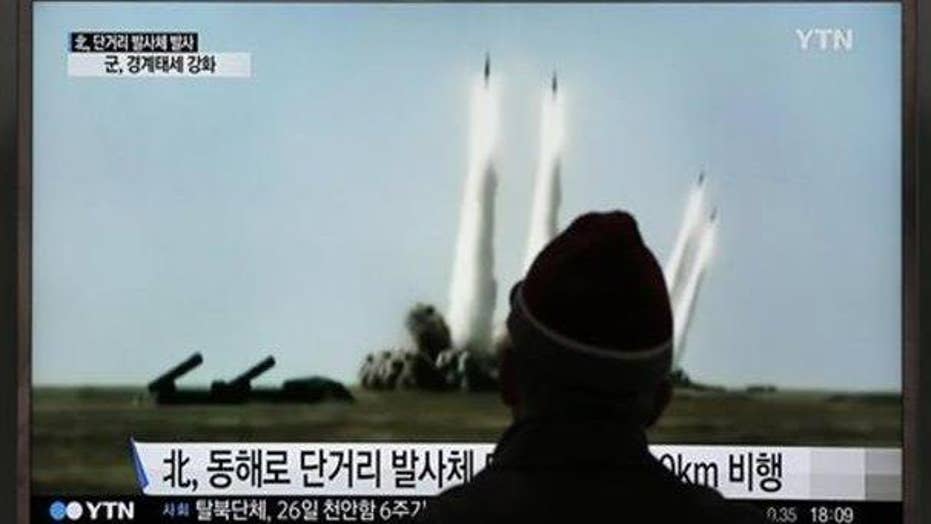 In an about-face, the Pentagon has reassessed the performance of both North Korean missile launches Wednesday and now says there is evidence the communist regime’s missile program has made significant advancements.

"After spectacular fiery crashes previously, this last one flew 250 miles," or roughly a third of the way between North Korea and Japan, a U.S. official with knowledge of the latest intelligence assessment told Fox News.

The first missile is now assessed to have flown about 90 miles according to the official. When asked if that Musudan test which was originally characterized as a "failed in flight" test was actually successful, the official said, "success depends on intent."

The State Dept. said sanctions against North Korea which went into effect earlier this year would have an impact despite evidence of the rogue nation's apparent progress in its missile program.

"We believe that these sanctions are stringent enough and tough enough that the enforcement mechanisms clear enough that they will have an impact that they will be felt by the regime," State Dept. spokesman John Kirby told reporters. "But it’s difficult for me impossible for me to tell you exactly when that is going to be."

He added, "These are the toughest sanctions in two decades and it takes time. It takes time."

Before the two latest launches, the communist regime was previously 0-4 in Musudan test flights. The previous missiles were believed to have exploded after takeoff.

When fully operational, officials estimate the Musudan intermediate range ballistic missile has a range of 2,000 miles, which would make it capable of hitting U.S. military forces as far away as Guam.

In addition, the State Department on June 1 declared North Korea a money launderer, "because North Korea uses state-controlled financial institutions and front companies to conduct international financial transactions that support the proliferation and development" of ballistic missiles and weapons of mass destruction.

North Korean dictator Kim Jong Un may have turned up the pressure on his scientists and military with his very public order in March to push ahead with more nuclear and missile tests. Such a burden from a boss who has shown a willingness to use violence against his underlings -- ordering even his own uncle's execution -- may toss normal scientific patience out the window.

Kim leads a small, impoverished, authoritarian country that sees itself beset with much larger enemies intent on its destruction. To protect his third-generation family dynasty, he may calculate that he needs to make North Korea appear too dangerous for Washington to try to topple him.

He may have been willing to weather outside mockery for progress on a missile whose development marks a big step toward North Korea's goal of a comprehensive nuclear and missile program that can deliver atomic bombs and missile strikes to U.S. targets around the world, including, eventually, the U.S. mainland.

Some analysts have been thrown by the speed with which North Korea moved on the suspected Musudan tests.

The first launch came on April 15, and was linked by outsiders both to Kim's March order and to the birthday anniversary that day of North Korea founder Kim Il Sung, Kim Jong Un's grandfather. Less than two weeks later, North Korea conducted two more launches. The next came June 1, and then came Wednesday's double firing.

"Repeating a failed test again and again with no more than a month for analysis and troubleshooting will almost guarantee repeated failure," according to aerospace engineer John Schilling, writing earlier this month, after the fourth test.

North Korea is extremely sensitive to outside criticism. Pyongyang, for instance, said Monday it won't negotiate to release arrested American citizens if a former U.S. detainee, Kenneth Bae, doesn't stop using what it called slanderous language about the North.

But even more important for the leadership is the support of the elite in Pyongyang, the North's capital.

North Korea said nothing in any of its state-run media about the launches, meaning most people in insular North Korea probably knew nothing about the duds.

For Kim Jong Un, a final, apparently successful launch of a missile that could be a real threat to his enemies may ease the pain of all the previous failures, especially since most of his people were unaware of them.