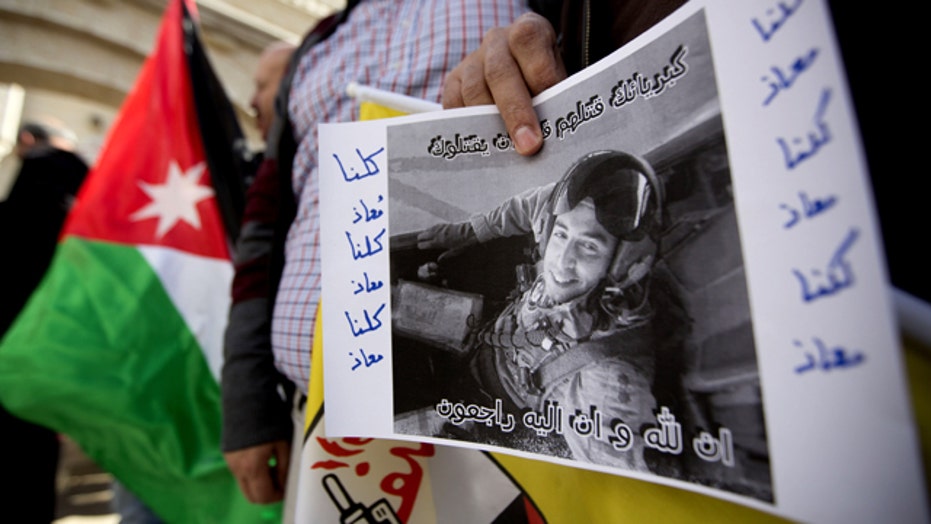 Reaction to murder of Jordanian pilot on streets of Amman

Jordanian fighter pilots carried out devastating sorties against ISIS early Thursday, making good on their king's vow of vengeance for the horrific burning death of a captured airman -- whose hometown the jets buzzed triumphantly after the mission.

Reports from the Middle East said the latest strikes killed 55 members of ISIS, including a senior commander known as the “Prince of Nineveh.” They came a day after King Abdullah stepped up his angry rhetoric at the terrorist army in neighboring Iraq and Syria following the horrific death of Lt. Muath al-Kaseasbeh, who was burned alive in a cage in a shocking atrocity caught on a videotape released by Islamic State on Tuesday.

"The blood of martyr Muath al-Kaseasbeh will not be in vain and the response of Jordan and its army after what happened to our dear son will be severe," said King Abdullah in a statement released by the royal court on Wednesday. A day earlier, he told U.S. lawmakers in Washington, where he had been on a diplomatic mission when the video was released, that Jordan would fight Islamic State until it ran "out of fuel and bullets."

Jordanian state-run media did not specify where the strikes took place, but U.S. officials told Fox News the strikes by 20 Jordanian F-16s took place at Thursday at 1 p.m. local time near the ISIS stronghold of Raqqa, Syria, and said “lots of ammunition” was expended. They said U.S. Air Force flew air refuellers and radar jammers in support.

Jordan had previously been divided on its participation in airstrikes against Islamic State, with many questioning why the country was involving itself in the fight. But rage expressed on the street and given clear voice by the king has shown public sentiment in Jordan, where the military is revered, is solidly behind the newly invigorated campaign.

Jordan’s information minister, Mohammad al-Momani told AFP: Amman was “more determined than ever to fight the terrorist group Daesh,” using another name for Islamic State, which is also commonly referred to as ISIS. And a government spokesman said Jordan would step up its role in the U.S.-led fight against the militant group.

Thursday's airstrikes came just hours after Jordan executed two militant prisoners in response to the killing of Kasseasbeh. But the pilot’s father told Reuters the two executions were not enough to avenge his son’s death.

"I want the state to get revenge for my son's blood through more executions of those people who follow this criminal group that shares nothing with Islam," Safi al-Kasseasbeh told Reuters.

The returning fighter jets roared over Al-Kaseasbeh's hometown in southern Jordan as the king paid a condolence visit to the pilot's family, and the monarch, himself a former general and special forces commander, pointed at the planes as he sat next to the pilot's father.

Abdullah has said Jordan's response "will be harsh because this terrorist organization is not only fighting us, but also fighting Islam and its pure values."

In prepared remarks delivered in Washington Thursday by Jordan's ambassador to the U.S., Abdullah said the global Muslim community is the primary target of terrorists in the Middle East.

“These criminals aim to stamp out life and rights everywhere. Their hate and murder has reached Asia, Europe, Africa, America and Australia," Abdullah said. "By the brutal killing of their prisoners and captives, they seek to hold families across the world hostage to their cruelty."

The Guardian reported that radio and television stations played patriotic songs and F-16 jets performed flyovers over the capital and Al-Kaseasbeh's hometown.

"I swear to God we will kill all those pigs," one man said of the terror group. "Whatever it takes to finish them is what we will do."

"We are all Hashemites and we are following the government with no reservations in this fight against these godless terrorists," a cafe patron, Yousf Majid al-Zarbi, told the paper. "Have you seen that video? I mean really, how in humanity could this be a just punishment for any person?"

Jordan had previously been thought to be home to thousands of supporters of ISIS. The kingdom is beset by several social problems, including a sharp economic downturn that has led to high unemployment among young men, who are typically a reservoir of potential ISIS recruits. Adding to a potentially destabilizing mix are the presence of hundreds of thousands of war refugees from Iraq and Syria who have poured across the border in the preceding decade.

In Washington, lawmakers from both parties have called on the Obama administration to speed up deliveries of aircraft parts, night-vision equipment and other weapons to Jordan.

Sen. John McCain, R-Ariz.,chairman of the Senate Armed Services Committee, said he expected his panel to swiftly approve legislation calling for increased aid. He repeated his criticism that the Obama administration has "no strategy" for dealing with the Islamic State group, and said he hoped the video of Al-Kaseasbeh's death will galvanize not only U.S. leadership but "the Arab world."

All 26 members of the Senate Armed Services Committee wrote in a letter to Secretary of State John Kerry and Defense Secretary Chuck Hagel that Jordan's situation and the unanimity of the coalition battling the extremists "demands that we move with speed to ensure they receive the military materiel they require."

At the White House, spokesman Josh Earnest said the administration would consider any aid package put forward by Congress, but that the White House would be looking for a specific request from Jordan's government.