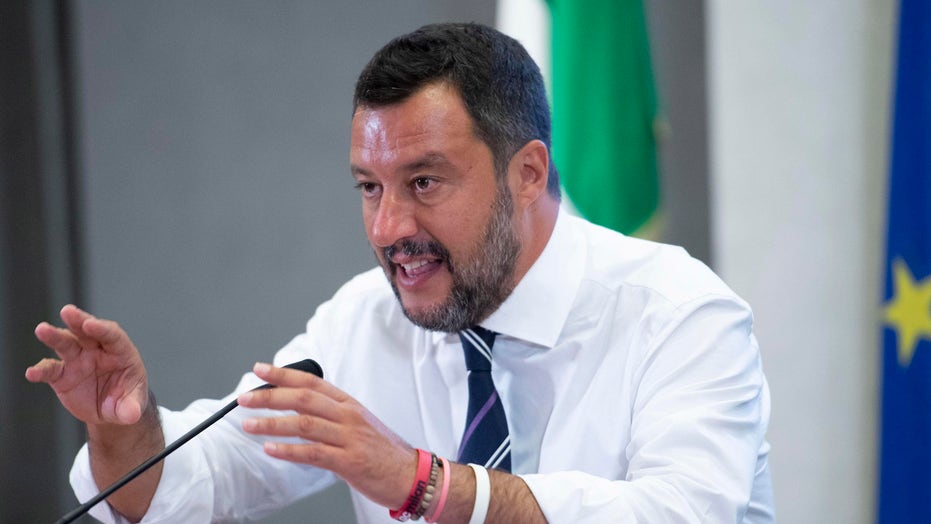 "Let's go immediately to the Parliament and verify that there is no longer a majority, as was evident in the vote on the TAV, and quickly return the word to voters," Salvini said Thursday.

Salvini’s League is currently in an uneasy coalition government with the anti-establishment 5-Star Movement, marred by infighting since it formed last year after no party came close to winning a parliamentary majority.

But since then, 5-Star's poll numbers have plummeted, while the League’s have soared -- buoyed in part by Salvini’s hard stance on illegal migration from Africa. The government this week passed a bill to fine NGO ships that pick up migrants in the Mediterranean and enter Italian waters up to 1 million euros.

As interior minister and often serving as the international face of the government, Salvini has feuded with international NGO’s, E.U. leaders, and members of the coalition government -- including 5-Star leader Luigi di Maio and Prime Minister Giuseppe Conte.

The tensions of the frayed coalition intensified this week over an E.U.-funded high-speed rail link (known as TAV)  with France. The project was backed by the League, and opposed by 5-Star. This week the Senate voted the project down, and after a meeting with Conte, Salvini announced his plans.

Recent polls have put the League polling at around 36 percent, with the left-wing Democratic Party polling at 21 percent. Five-Star, meanwhile has been polling at 18 percent.

Salvini needs at least 40 percent of seats in an election to form a government. If the League does not achieve that, it could ally up with the right-wing Brothers of Italy or former premier Silvio Berlusconi’s center-right Forza Italia -- both polling in single digits -- to get over the line.

Conte accused Salvini of trying to capitalize on a recent surge in polling for the League.

"Salvini told me that he intended to interrupt this government experience to have elections in order to capitalize on the support the League currently enjoys," Conte told a press conference Friday, according to Italian news agency ANSA.

On Friday, League senators presented a motion of no-confidence vote in Conte, setting up a vote on Monday. But Conte has said it should be up to the lower chamber that decides whether the government has confidence in him.

Should there be a vote of no-confidence, it would be up to Italian President Sergio Mattarella to call for a new election, if he does not find other parties to form a government.

Should that go as Salvini hopes, and the League govern by itself, it would certainly shift the country even more to the right on issues such as immigration, E.U. relations and taxes -- and mark a significant win for the right-wing, nationalist-populist movement sweeping through the continent since the 2015 migration crisis.