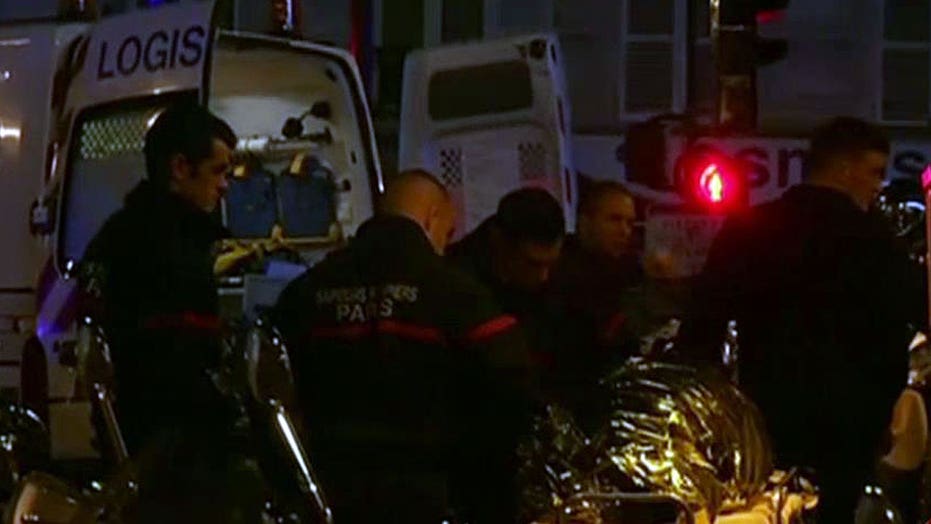 Survivors of a terror attack on a concert hall in the center of Paris that is believed to have killed at least 87 people have described how black-clad gunmen fired calmly and methodically into a crowd of hundreds who had gathered to watch a rock-and-roll show.

Le Bataclan, one of the most popular music venues in the French capital, was playing host to the Eagles of Death Metal, a Southern California-based garage rock band. The band plays its music loud, but not loud enough to drown out the sound of automatic weapons being fired by the attackers.

Pierre Janaszak, a Parisian radio host, told the Telegraph that he initially thought the loud bangs were part of the performance.

"But we quickly understood," he told Britain's Daily Telegraph. "They were just firing into the crowd."

"It was carnage," Marc Coupris, who attended the show with his mother, told the Guardian. "There was blood everywhere, there were bodies everywhere. I was at the far side of the hall when shooting began. There seemed to be at least two gunmen. They shot from the balcony.

"Everyone scrabbled to the ground. I was on the ground with a man on top of me and another one beside me up against a wall. We just stayed still like that. At first we kept quiet. I don’t know how long we stayed like that, it seemed like an eternity."

Julien Pearce, a journalist for Europe 1 radio, said the attackers did not bother to cover their faces before they opened fire with automatic weapons. He said each round of gunfire lasted 10 to 15 minutes before the shooters paused to reload, which he said they did "at least three times."

"Everyone was running in all directions towards the stage. It was a stampede and even I was trampled. I saw a lot of people hit by bullets ... [The gunmen] knew what they were doing, they were very young."

Accounts differ as to what the attackers said as they fired. Coupris told Guardian he heard the men shout "Allahu Akbar", Arabic for "God is great."

Janaszak said one of the gunmen referenced France's role in helping the U.S. carry out airstrikes in Syria. "I clearly heard them say 'It's the fault of (French President Francois) Hollande, it's the fault of your president, he should not have intervened in Syria'". They also spoke about Iraq."

Another witness, who gave her name as Yasmin, told France's BFM television that "I saw two guys. The biggest one said: 'What are you doing in Syria? You're going to pay now.' Then he opened fire. I saw bodies falling all around me. I was shot in the foot. It was carnage. I've never seen so many dead people all around."

In the chaos, concert attendees sought safety any way they could. Frederic Nowak, who was attending the concert with his son, exited the hall through a door near the stage. He and a group of fellow concert-goers emerged into a stairwell, but found each of the doors off the stairs to be locked.

"We were stuck there for about ten minutes," Nowak told the Telegraph. "There were thirty or forty people there. Then we went further up the stairs and arrived at the roof. We got out through a window and we saw a man whose apartment was in the building next door waving to us. We made our way over the rooftop and he let us in through his attic window."

Benjamin Cazenoves posted updates from inside the hall to Facebook as the gunmen sought out survivors of the initial shooting.

"I am still in the Bataclan," he wrote. "First floor. People with serious injuries. They have to storm the building quickly! They are killing everyone. One by one. First floor, quick!" It was not immediately clear whether he survived the gunfire.

At around 12 a.m., French police confirmed that the assault was over and that four attackers had been killed. Three had detonated their suicide vests, while the fourth was blown up after being shot by police.

"Eventually, when a few gendarmes came in slowly we began to look up and there was blood absolutely everywhere," Coupris said. "The police told us to run."