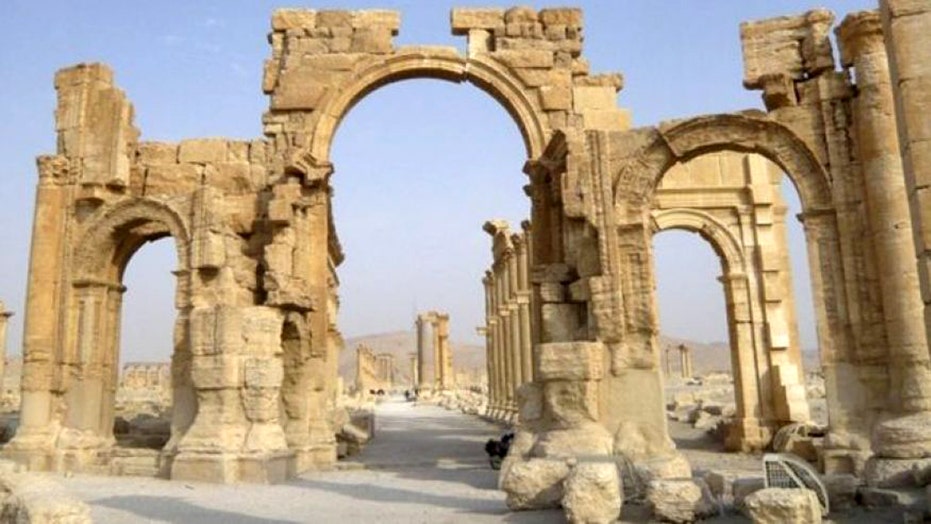 BEIRUT – Syrian activists said late Sunday that Islamic State (ISIS) militants have destroyed a nearly 2,000-year-old arch in the ancient city of Palmyra, the latest victim in the group's campaign to destroy historic sites across the territory it controls in Iraq and Syria.

The Arch of Triumph was one of the most recognizable sites in Palmyra, the central city affectionately known by Syrians as the "Bride of the Desert," which the ISIS group seized in May. The monumental arch sat atop the famed colonnaded streets of the ancient city, which linked the Roman Empire to Persia and the East.

The Britain-based Syrian Observatory for Human Rights said the ISIS group blew up the arch but left the colonnades in place.

An opposition activist who uses the name Khaled al-Homsi also posted on Twitter late Sunday that the militants destroyed the arch. Al-Homsi was a nephew of Khaled al-Asaad, the 81-year-old antiquities scholar and long-time director of the Palmyra site who relatives and witnesses say was beheaded by ISIS militants in August.

Palmyra's sprawling Roman-era complex, which also includes remains of temples to local gods and goddesses, has been under attack from ISIS. The Sunni extremists impose a violent interpretation of Islamic law across a self-declared "caliphate," declaring such ancient relics promote idolatry and saying they are destroying them as part of their purge of paganism. However, they are also believed to sell off looted antiquities, bringing in significant sums of cash.

The temple of Baalshamin, a structure of giant stone blocks several stories high fronted by six towering columns, was dedicated to a god of storm and rain -- the name means literally "Lord of the Heavens."

The even larger and slightly older Temple of Bel, dating back to 32 AD, was a unique merging of ancient Near Eastern and Greco-Roman architecture. It was dedicated to the Semitic god Bel and is considered one of the most important religious buildings of the first century. The temple consisted of a central shrine within a colonnaded courtyard with a large gateway, within a complex that has other ruins, including an amphitheater and some tombs.

UNESCO, the U.N. heritage agency, has called the destruction an "intolerable crime against civilization."

Before the outbreak of Syria's war in March 2011, Palmyra's UNESCO heritage site was one of the top tourist attractions in the Middle East.

Heritage sites have been damaged constantly since Syria's war began. Syrian government officials say they have transferred some 300,000 artifacts to safe places in recent years, including from ISIS-controlled areas.

In addition to pre-Islamic sites, the militants have also targeted churches, mosques and museums.