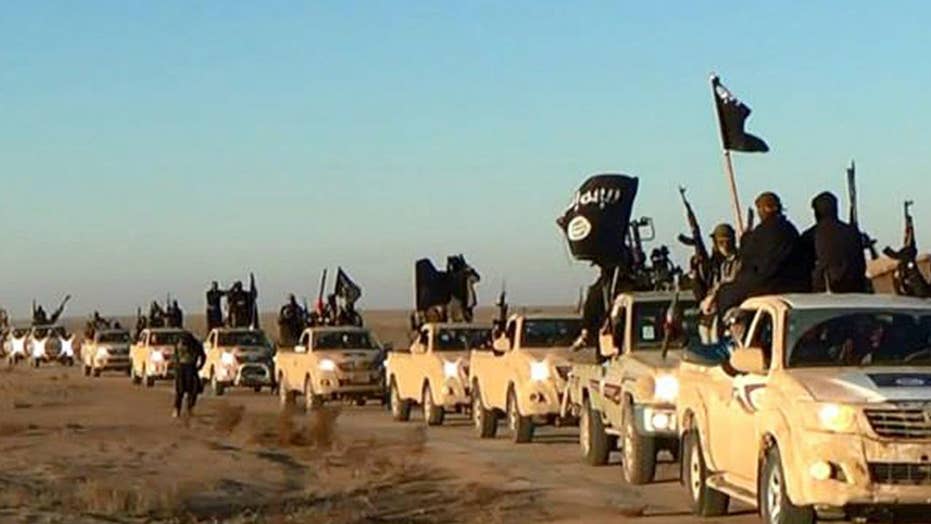 ISIS may be planning to join forces with Al Qaeda

What would this type of alliance mean for the threat to America?

In the wake of increased airstrikes and pressure applied from three directions by U.S.-backed Syrian forces, the Islamic State has essentially moved its so-called capital in Syria, U.S. defense officials told Fox News.

U.S. military drones have watched hundreds of ISIS “bureaucrats,” or administrators, leaving Raqqa in the past two months for
the city of al-Mayadin located further down the Euphrates River from Deir el-Zour where U.S. Central Command announced that it killed mid-level ISIS “operative” Abdurakhmon Uzbeki.

The looming battle for Raqqa is imminent but the ISIS government is no longer there, according to officials.

Now that Turkey’s constitutional referendum has been completed, U.S. military officials hope to forge ahead with a more aggressive plan to assault Raqqa in the near future. A major sticking point of NATO-ally Turkey is the use of Syrian Kurdish fighters of the YPG which for years the Pentagon has called the best fighters on the ground against ISIS. Turkey has claimed the YPG is an extension of the Kurdistan Workers’ Party or PKK, a group labeled a terrorist organization by Ankara and Washington.

Lt. Gen. Stephen Townsend, the head of the U.S.-led coalition based in Baghdad, said last month that Syrian Kurdish fighters would participate in “in some form or fashion” in the operation to retake Raqqa.

Ideally, the Pentagon would like to have Kurdish fighters surround Raqqa, in much the same way that Shia-militia forces have surrounded Mosul next door in Iraq.  In Syria, American military commanders have said they'd like a local Arab force to assault Raqqa. Questions remain about the hold force necessary to keep the peace after ISIS is uprooted from Raqqa. Much will be determined by the civilians in Raqqa held captive starting in 2014, about who is able to run the city moving forward.

There are other looming questions about whether the Pentagon will supply heavy weapons to the Kurdish fighters over objections from Turkey. The speed at which fighters of the Kurdish-led Syrian Democratic Forces (SDF) can get into Raqqa depends on their access to heavy weapons, according to U.S. officials. While there is an Arab component to the SDF, American officials admit there are not enough of them.

Last week on a visit to the United States, Turkey’s Minister of Defense Fikri IŞIK visited Defense Secretary Jim Mattis in the Pentagon before the referendum vote.

Ahead of their meeting, both IŞIK and Mattis ignored shouted questions from a reporter about the role Syrian Kurdish fighters would play in the upcoming Raqqa battle.

In a sign of the increasing American role on the ground in Syria, last month a U.S. Marine artillery battery with some 400 Marines was inserted outside Raqqa to shell the ISIS capital with artillery rounds. The Marines later supported a U.S.-led air assault, when hundreds of Syrian fighters, along with some U.S. backed special operations forces, were inserted in Tabqa located some 30 miles west of Raqqa, home to a strategic airfield and dam.

The U.S. military announced late last month the Tabqa airfield had been successfully recaptured from ISIS.

The battle for the dam remains ongoing.