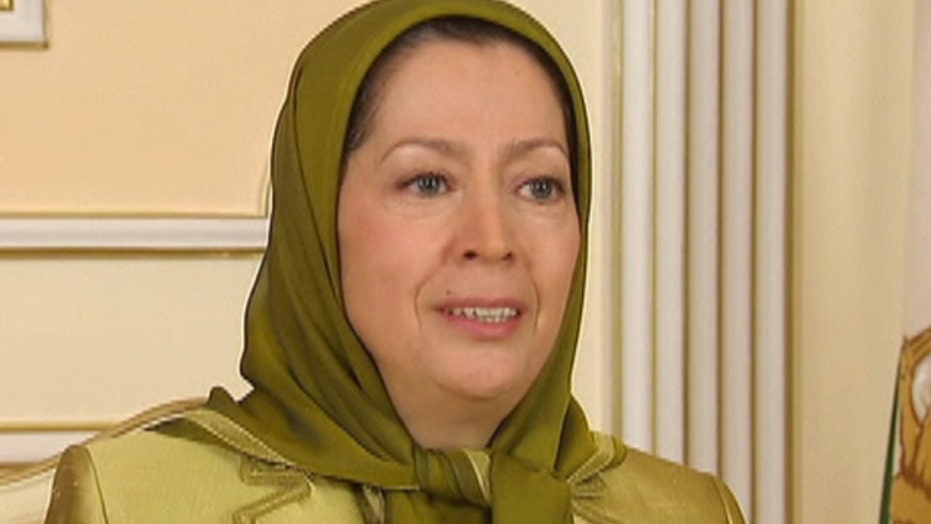 Eric Shawn interviews head of the Council of Resistance of Iran

It is a blunt call for regime change in Tehran.

The largest gathering of the Iranian resistance starts Friday with the annual convention of the Council of Resistance of Iran. The sponsors expect 100,000 people to assemble in a massive hall outside Paris for hours of speeches, demonstrations and protests aimed at toppling the Iranian government.

"I am confident that the mullahs' religious dictatorship ruling Iran will not last in the 21st century and will be overthrown," predicts the group's leader, Maryam Rajavi. "It really begs logic to expect this religious dictatorship, the founder of terrorism and fundamentalism in the whole of the region and is seeking nuclear weapons, to take international policy hostage, to continue and endure."

In an exclusive Fox News interview, her first for American television, Rajavi methodically laid out what she sees as Tehran's intentions: to spread radical fundamentalism, obtain a nuclear weapon and do whatever it can to eliminate opponents, including continued executions of her supporters to silence the opposition.

The group, also known as the MEK, or Peoples' Mujahdin Organization of Iran, first waged a battle against the Shah of Iran and then turned its calling to opposing the current regime.

But the group is not without controversy. It was listed as a terrorist organization for years, and was only de-listed by European and U.S. governments in the last six years. Its officials say the listing was a concession by Western governments to appease Tehran, and Iranian officials have long reportedly targeted it in negotiations with the West.

The group says during its struggle, more than 120,000 of its members and supporters have been killed in Iran, most recently a supporter who Iranian authorities hanged in prison.

It says Iraqi authorities also massacred dozens of its members at the behest of Iran at Camp Ashraf, its former encampment in Iraq. In 2002, the group was the first to publicly expose the extent of Iran's clandestine nuclear program, and has been working, say its officials, to expose Iran's real intentions ever since.

"They cannot be trusted," Rajavi insisted. "It is abundantly clear that the mullahs' regime is after the nuclear bomb. Thus we are demanding an end to the nuclear program."

With a looming deadline of July 20 for Iran and the six Western powers to come to an interim agreement on the disputed nuclear program, Rajavi said any deal must reflect the six United Nations Security Council resolutions that call for Iran to suspend its nuclear enrichment capability. Iran has not only repeatedly defied the Council's mandates, but may actually be allowed to partially maintain the right to enrich under the current framework.

"I believe any such possibility left at the hands of the mullahs paves the way for them to quickly obtain what they want, (nuclear weapons), at a time they so choose," she warned. "For this reason, it is imperative that Security Council resolutions are implemented fully by the mullah's dictatorship. Otherwise, any concessions to the mullahs will no doubt enable them to find a way to cheat in order to secretly continue its activity to reach the nuclear bomb...this is unacceptable."

Tehran has long denied that it seeks nuclear weapons, and says that it only wants nuclear capability for the generation of electricity, a claim many critics deride. Rajavi worries that a potential agreement would still leave an opening for Iran to quickly develop a bomb.

"We hope that in these negotiations, the international community would succeed in halting the bomb making of the mullahs, which is what we, the Iranian resistance and the Iranian people, want. Regrettably, the direction of the talks does not show such a thing."

She also said that Iran's goal is to expand its brand of religious fundamentalism at the expense of the West, a prospect that has emboldened Bashar al-Assad in Syria and Nouri al-Maliki in Iraq.

"One of the regime's strategic pillars is the export of terrorism and fundamentalism. Many regime officials have stated officially that Syria and Iraq represent the strategic depth for the regime. Therefore, the focal point of what is happening in Syria and Iraq, is Tehran," she said.

She added that goal is now playing out on the world stage with the collapse of the Iraqi army and the embattled prime minister reportedly receiving Iranian help. She says al-Maliki "should step aside," and that "the formation of a national coalition government is the only way to resolve the present crisis in Iraq, all of which point to Tehran and its eviction from Iraq.

"The mullahs in Iran received Iraq on a silver platter and has greatly interfered in every aspect of life in that country, such that it is common knowledge that al-Maliki is an Iranian operative who advances the religious dictatorship's agenda, including the countless killings of the Sunnis and Shiites who do not support al-Maliki, the massacre of Christians, making them homeless, as well as the mass killings and imprisonment of many in Iraq," she charged, adding, "all of these have occurred at the behest of the mullahs."

Rajavi's group has begun to attract widespread bipartisan support in Congress and has garnered allies among many former high-ranking U.S. officials. Among those who work with the group and will appear at the convention are former New York City Mayor Rudolph Giuliani, former Vermont Governor and presidential candidate Howard Dean, former U.S. ambassador to the United Nations John Bolton, former Connecticut senator and vice presidential candidate Joseph Lieberman, former U.S. Attorney General Mike Mukasey, former chairman of the Joint Chiefs of Staff General Hugh Shelton and Army Chief of Staff General George Casey, among others. The council has also opened a lobbying office near the White House.

The Council's heightened prominence has not gone unnoticed in Tehran.

"The people of Iraq despise them and want them out, as well they should," said the head of Iran's Mission to the United Nations, Hamid Babaei, in a previous statement to Fox News. Repeated requests by Fox News for comment went unanswered, but Iranian officials have branded Rajavi's group as "a terrorist" organization, "a cult," and claimed that its allegations about the Iranian nuclear program have been "fabricated."

"It should be noted that this group supported Saddam Hussein during the Iran-Iraq war and played a major role in the violent crackdown on the civilian uprising in the early 90s while living in Iraq as a private militia for Saddam Hussein," Babaei said.

Rajavi rejected such criticism, saying that it reflects the fear the regime has of the growing opposition.

"The allegations the mullahs levy at the Iranian resistance are also ludicrous," she responded. "These allegations have no foundation whatsoever."

She noted that the group's nuclear exposes have been confirmed by the United Nations’ IAEA nuclear agency, and said, "if this information is not true, why then is the regime so afraid? And why have they come to the negotiating table, claiming that these nuclear sites are only used for nuclear energy and civilian nuclear work and not for bomb making?

"This is a group that is very much in the interest of the United States to support, and create leverage against the ayatollahs," Giuliani told Fox News. He laughed off the barbs aimed at him from Tehran, in which Babaei called his "warm embrace of the MEK terrorist organization ...shocking and deplorable," charging the group has given "millions of dollars to politicians and lobbyists in Washington, where it seems everyone has a price tag as a campaign donation or 'speakers fees.'"

He likened the council to the solidarity movement in Poland that brought down the communist regime, and Maryam Rajavi to Lech Walesa.

"By recognizing this group, we could start a whole momentum that could possibly lead to a whole different government," Giuliani said. "This is a very, very legitimate group."

For her part, Rajavi is confident that her resistance movement will triumph and she cites history as a precedent.

"The experience is out there, including in the history of the United States, such as George Washington and the people of America who decided to stand up to colonialism to gain independence, such as Abraham Lincoln and the price he paid and the wars he waged to abolish slavery and the price the people of America paid during the time of Dr. Martin Luther King for civil rights and the struggle of the people of America for the freedom of women. These are all historical experiences and I am, therefore, confident. My experience, and that of the Iranian people tell us that when a people, a nation decides to fight and pay the price for the rights it deserves, such as democracy, freedom and equality, when it decides to fight for these pay the price, for values which shine in history of all human societies ... it will certainly achieve it.