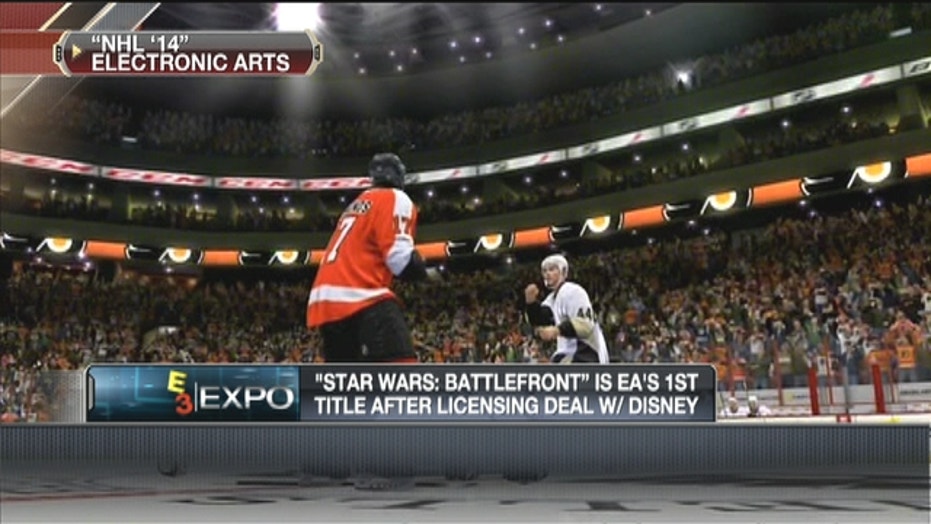 EA COO Peter Moore talks about 'Star Wars: Battlefront' and the future of next gen games.

The next generation of gaming has arrived and is on full display at this week's Electronic Entertainment Expo, the much-hyped Los Angeles trade show where about 46,000 attendees are expected to play, poke and prod new video games and gizmos from more than 200 exhibitors.

But the actual reality is likely a combination of all the above, even though it doesn't seem the creators have been able to effectively communicate that idea.

The move from standard- to high-definition graphics, as well as the introduction of a simple-to-use doodad called the Wiimote, made the last transition between console generations easy to see — and feel. But it's been a tougher proposition this time for companies attempting to sell difficult-to-describe consoles to consumers more interested in mobile devices.

Nintendo already kicked off the next generation with a thud last November with the launch of the Wii U, the successor to the popular Wii system featuring an innovative tablet-like controller yet graphics on par with Microsoft's Xbox 360 and Sony's PlayStation 3. Nintendo said it sold just 3.45 million units by the end of March, well below the company's expectations.

Sony Corp. and Microsoft Corp. both plan to go into deeper detail at E3 about their forthcoming systems that were teased earlier this year. Sony called the PlayStation 4 a "supercharged PC," while Microsoft described its Xbox One as an "all-in-one" entertainment solution for living rooms. The announcements of both consoles were met with mixed reactions.

"There's a lot of anxiety about the console transition," said Stephen Totilo, editor of the gaming blog Kotaku.com. "These transitions can flip a company's fortunes. Sony was up for two generations, and then they came in third place this last time. It's also difficult for the third-party publishers, who have to figure out where to allocate their resources."

"I think you can characterize it the excitement is this holiday, the money comes the following year," Moore said Wednesday. "From a business perspective the ramp we will see will really be holiday 2014."

The gaming industry is expected to focus more on games at its annual gathering this week at the Los Angeles Convention Center since each of the next-gen consoles have already been revealed. The technology and creativity on display on the E3 show floor could potentially shape what's to come in gaming over the next decade.

Among the titles that will be pushed at E3 are first-person shooter "Call of Duty: Ghosts"; stealth series reboot "Thief"; a motion-controlled rendition of a Disney classic, "Fantasia: Music Evolved"; Caped Crusader prequel "Batman: Arkham Origins"; shadowy action-adventure "Watch Dogs"; and new sci-fi game "Destiny." from the creators of "Halo."

With the world's attention on E3, the event could also serve as the ultimate opportunity for Microsoft and Sony to address head on the concerns over connectivity and privacy issues with their new systems. Other questions that remain unanswered include just how much the PS4 and Xbox One will cost and exactly how the new systems will embrace previously played or used games.

In a note posted on Microsoft's site last Thursday, the company outlined many such plans. Microsoft, which intends to showcase 15 exclusive games at its Monday presentation, said the Xbox One must be connected to the Internet every 24 hours to operate, and there are specific restrictions on how games could be shared with friends and family members.

Instead of a typical flashy E3 presentation, Nintendo is hosting demonstrations at its booth on the show floor, as well as previewing upcoming titles at more than 100 Best Buy stores in North America. The Japanese gaming giant will be showing off "Mario Kart" and "Super Smash Bros." installments for the Wii U, and they might unveil a new "Legend of Zelda" game.

"We are past the days where one game alone has the power to change the course of momentum for any given system," said Reggie Fils-Aime, president of Nintendo of America. "I think consumers need to look at an overall line-up and see three, maybe four games that they look at and say, 'These are exciting and will get me engaged with this platform.'"

There will likely be less games promoted at E3 than in previous years, a sign of the times as developers continue to focus on launching sure-fire franchises like "Call of Duty," ''Halo" and "Assassin's Creed," which are capable of attracting consumers not only willing to buy new installments but also downloadable content and associated merchandise.

"The development costs and risks associated with into getting into developing games for the PS4 and the next Xbox is steep," said Tony Bartel, president of GameStop. "It is more movie-like in terms of making products for these systems. The barriers are high, but what it's leading to is phenomenal game-making, a concentration of talent that makes great games."