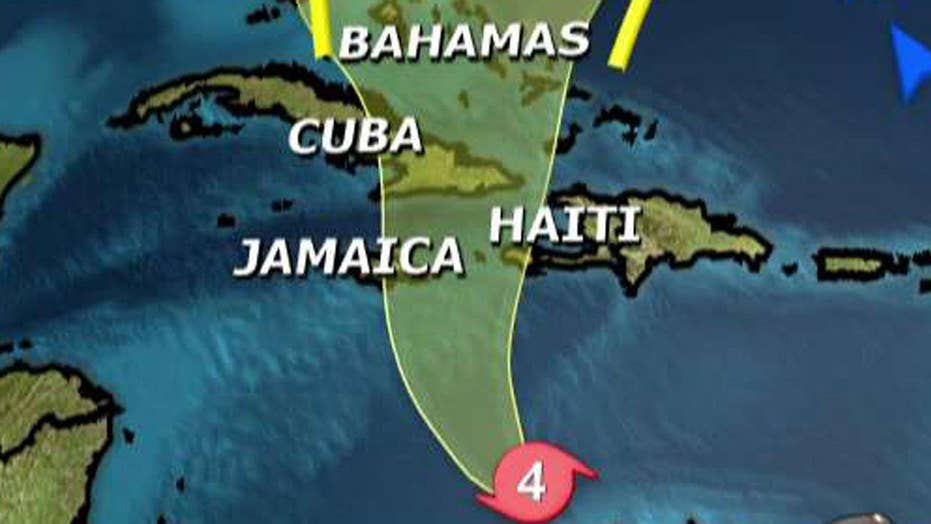 Storm could potentially impact the East Coast of the U.S.

Hurricane Matthew briefly became a powerful Category 5 storm Friday night as it crossed the Caribbean Sea on a course that could have it pounding Jamaica within days.

The U.S. National Hurricane Center, which downgraded Matthew to a Category 4 storm early Saturday, called it the strongest hurricane in the Atlantic since Felix in 2007.

The U.S. National Hurricane Center in Miami said Matthew's winds had slipped from a peak of 160 mph to a still-devastating 145 mph and it was expected to reach the eastern part of Jamaica on Monday.

"It's too early to rule out what impacts, if any, would occur in the United States and Florida," said Dennis Feltgen, a spokesman at the Hurricane Center.

As Matthew skimmed past the northern tip of South America there were reports of heavy flooding and at least one death — the second attributed to the storm.

Authorities said at least 18 houses were damaged along the La Guajira peninsula of Colombia, which has been suffering from a multi-year drought. They said a 67-year-old man was swept away to his death by a flash flood in an area where it hadn't rained for four years.

Jamaica activated its National Emergency Operations Center and Prime Minister Andrew Holness called an urgent meeting of Parliament to discuss preparations for the storm. People cleared out store shelves as they stocked up emergency supplies.

"I left work to pick up a few items, candles, tin stuff, bread," 41-year-old Angella Wage said at a crowded store in the Half Way Tree area of the capital. "We can never be too careful."

Hurricane Gilbert, which made landfall on the island in September 1988 and was the most destructive storm in the country's modern history.

"Hurricane Matthew could rival or possibly exceed Gilbert if the core of the strongest winds does actually move over Jamaica," said Dennis Feltgen, a meteorologist and spokesman for the U.S. National Hurricane Center in Miami. "There is no certainty of that at this point."

Matthew was expected to bring heavy rainfall especially to the eastern tip and higher elevations, which could trigger flooding and landslides, Thompson said.

The Jamaican capital, Kingston, is in the southeastern corner of Jamaica and was expected to experience flooding. The government issued a hurricane watch on Friday afternoon, and a tropical storm watch was issued for Haiti's southwest coast form the southern border it shares with the Dominican Republic to the capital of Port-au-Prince.

As of 11 a.m. EDT, the storm was centered about 390 miles southeast of Kingston. It was moving west at 6 mph.

Matthew caused at one death when it entered the Caribbean on Wednesday, with officials in St. Vincent reporting a 16-year-old boy was crushed by a boulder as he tried to clear a blocked drain.