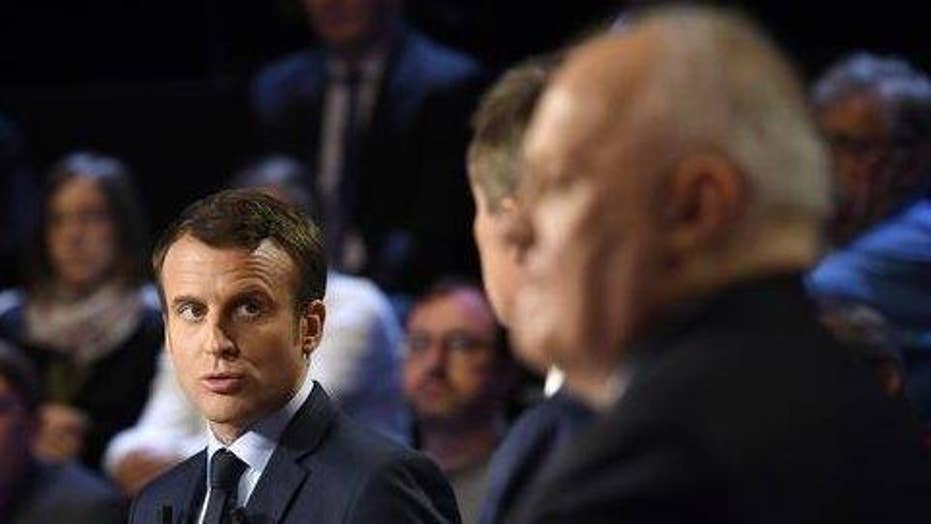 How France's election could impact America and Europe

Rich Edson has the story for 'Special Report'

As a significant trading and security partner, France’s presidential election Sunday will likely hold substantial consequences for the United States.

The State Department says the U.S. and France “work closely on many issues” including counterterrorism, the Iran nuclear agreement and in international organizations like the United Nations Security Council and North Atlantic Treaty Organization, or NATO.

Even the past two U.S. presidents are either talking about, or to, the French candidates.

President Trump told the Associated Press that far-right candidate Marine Le Pen is "strongest on borders” and “what's been going on in France." The president said he offered no official endorsement.  Le Pen wants to dramatically reduce immigration to France and withdraw from global alliances.

The relative centrist in the race, Emmanuel Macron, spoke this week with President Obama and tweeted “Let’s keep defending our progressive values. Thank you for this discussion @BarackObama.”

The former president’s spokesman said Obama spoke with Macron, about the “important upcoming presidential election in France, a country that President Obama remains deeply committed to as a close ally of the United States, and as a leader on behalf of liberal values in Europe and around the world,” said a statement from Kevin Lewis, a spokesperson for President Obama.  “An endorsement was not the purpose of the call, as President Obama is not making any formal endorsement in advance of the run-off election on Sunday.”

Also polling among the top four candidates are Jean-Luc Mélenchon, a far left candidate who also wants to withdraw from global alliances, and François Fillon, a center-right candidate.

Of the top four candidates, three are in favor of closer ties to Russia, two others want to boost France and Europe’s defense capabilities to rely less on NATO and the United States.  Two have spoken openly about leaving or redefining the European Union and NATO.

“If France were to withdraw from NATOs integrated military structures that would be a big blow to U.S. interests,” said Jeffrey Rathke, a senior fellow and deputy director of the Europe Program at the Center for Strategic and International Studies.  “France is one of the most militarily capable allies that we have and their participation in NATO missions is extremely important and it advances us security as well.”

There is also the U.S.-France economic relationship. France is the United States’ third-largest trading partner in Europe.  The government says the U.S. exports about $30 billion in goods to France and imports more than $47 billion.

One analyst said a withdrawal from the European Union could prompt major economic promises.

“Both Jean-Luc Mélenchon and Marine Le Pen advocate a very deep renegotiation of France’s stance with the EU that could in actuality result in France’s exit from the euro zone,” said Dalibor Rohac, a research fellow at the American Enterprise Institute.  “Its default on its sovereign debt which would propel a financial crisis on a scale much bigger than the one we saw in 2008.”

If no candidate wins a majority, the top two participate in a May 7 runoff.