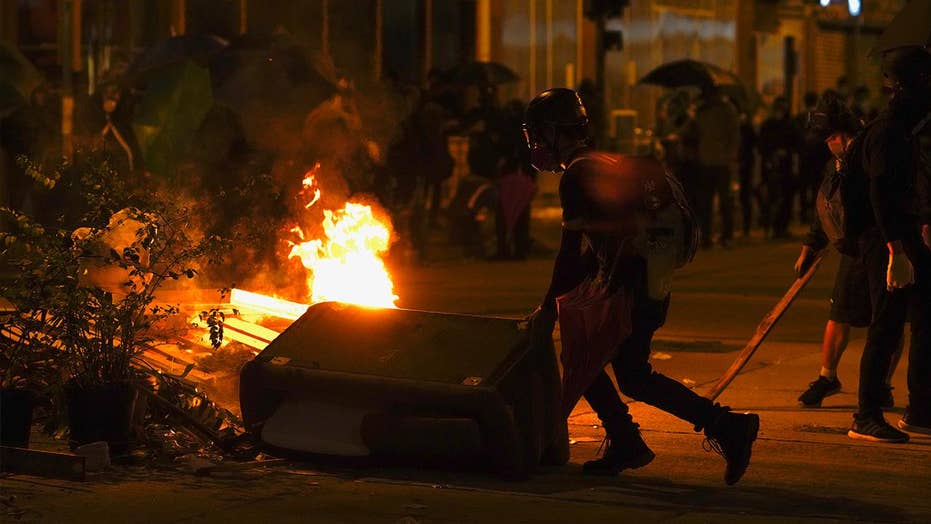 Fox News correspondent Greg Palkot reports on the latest violence in Hong Kong, which is currently seeing a standoff between protesters and police on a university campus.

About 100 anti-government protesters remained holed up at a Hong Kong university Tuesday as a police siege of the campus entered its third day.

City leader Carrie Lam said 600 people had left the Hong Kong Polytechnic campus, including 200 who are under 18 years old. Police have surrounded the university and are arresting anyone who leaves. Groups of protesters made several attempts to escape Monday, including sliding down hoses to waiting motorcycles, but it wasn’t clear if they evaded arrest, according to the Associated Press.

Lam said those under 18 would not be immediately arrested but could face charges later. She said the other 400 who have left have been arrested.

“We will use whatever means to continue to persuade and arrange for these remaining protesters to leave the campus as soon as possible so that this whole operation could end in a peaceful manner,” she said after a weekly meeting with advisers.

Now in its fifth month, the Hong Kong protest movement has steadily intensified as local and Beijing authorities harden their positions and refuse to make concessions. Universities became the latest battleground last week, as protesters occupied several campuses, using gasoline bombs and bows and arrows to fend off riot police backed by armored cars and water cannons. Those at Polytechnic are the last holdouts.

Social media users shared videos and photos of the standoff between anti-government protesters at the university and police. One user said police made unarmed protesters lay face down as they were put under arrest. Other users shared a video from World News that appeared to show police deploy tear gas on those fleeing the university campus.

China, which took control of the former British colony in 1997 promising to let it retain its autonomy, flexed its muscles, sending troops outside their barracks over the weekend in a cleanup operation.

China’s ambassador to Britain accused the U.K. and the U.S. of meddling in the country’s internal affairs and warned that the Chinese government “will not sit on our hands” if the situation in Hong Kong “becomes uncontrollable.”

“These rioters, they are also criminals. They have to face the consequences of their acts,” Cheuk Hau-yip, the commander of Kowloon West district, where Polytechnic University is located, said, according to the Associated Press.

“Other than coming out to surrender, I don’t see that there’s any viable option for them,” he continued, adding that police have the ability and resolve to end the standoff.

Lam, asked whether she would seek help from Chinese troops based in Hong Kong, said her government remains confident it is able to cope with the situation. China also hinted it might overrule the Hong Kong’s high court ruling on Monday to strike down a ban on face masks that was aimed at preventing protesters from hiding their identity to evade arrest. Monday’s ruling said the ban infringes on fundamental rights more than is reasonably necessary. The ban has been widely disregarded.