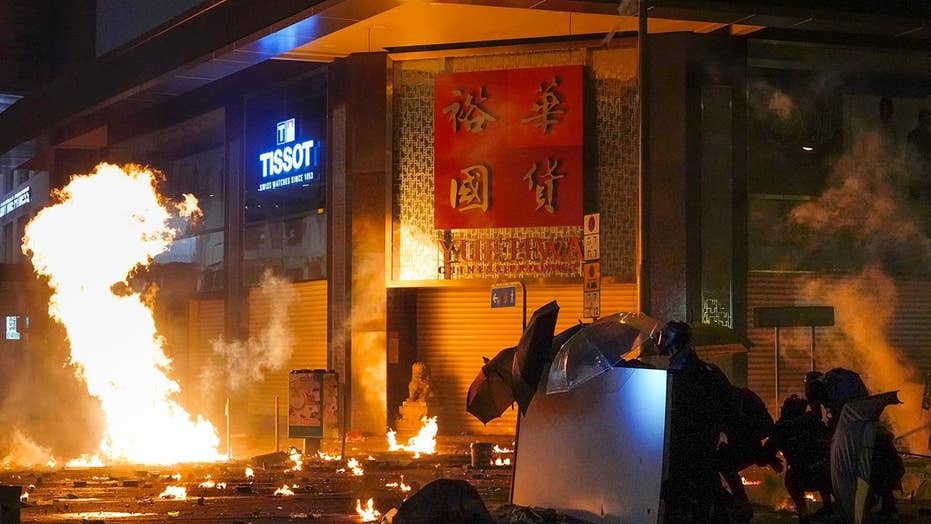 Hong Kong anti-government protesters reportedly were closing in on the city’s Polytechnic University Monday in a bid to help hundreds of their allies there evade arrest after battling police with gasoline bombs and bows and arrows.

The university is currently surrounded by police and has been occupied for days by demonstrators rallying against the territory’s government and Beijing. Police are looking to take around 200 people there into custody – but their advances have been rebuffed by a sharp escalation in violence by the protesters, who are trying to keep the pressure on Hong Kong leaders that have rejected most of their demands.

Senior government officials said Monday they were trying to de-escalate the situation and urged the protesters to peacefully leave the campus and cooperate with police — but that advice seemed certain to lead to arrests and therefore strengthened the protesters’ resolve to resist, the Associated Press reports.

Police in riot gear move through a cloud of smoke as they detain a protester at the Hong Kong Polytechnic University in Hong Kong, on Monday. (AP)

Riot officers broke in one entrance before dawn as fires raged inside and outside the school, but they didn’t appear to get very far. Fiery explosions could be seen as protesters responded with gasoline bombs. Police, who have warned that everyone in the area could be charged with rioting, reportedly made a handful of arrested.

For days, protesters have fortified the campus to keep police from getting in. Cornered by authorities, they now are trying to find a way to get out.

Protesters stand on the steps of the Hong Kong Polytechnic University on Monday. Police there have swooped in with tear gas and batons as protesters who have taken over the university campus are making an apparent last-ditch effort to escape arrest. (AP)

Officers repelled one attempt Monday morning with tear gas, driving a few hundred protesters back onto the campus.

“These rioters, they are also criminals. They have to face the consequences of their acts,” said Cheuk Hau-yip, the commander of Kowloon West district, where Polytechnic is located.

“Other than coming out to surrender, I don’t see, at the moment, there’s any viable option for them,” he said.

Yet thousands of Hong Kong protesters are now reported to be streaming toward the police cordon late Monday night in a bid to help free the trapped protesters.

“Everyone is running around, looking for exits,” one protester at the university, who identified herself as Seze Li, told The Guardian. “We heard the protesters… are coming. We are just waiting for them.

“Inside we are gathering protesters... we are separated, hidden in offices and small rooms, just blocking ourselves in to hide from police,” she added.

Some protesters late Monday tried to escape the university by lowering themselves from a footbridge to a road below where they were met by motorbike riders helping them flee. It was unclear whether they got away safely.

Police first surrounded Polytechnic University Sunday night and began moving in after issuing an ultimatum for people to leave the area. The crowd there wore raincoats and carried umbrellas to shield themselves from police water cannons.

Elsewhere, protesters won on a legal front Monday when a high court struck down a mask ban imposed by the government last month. The court said it did not consider anti-mask laws unconstitutional in general, but in this case, the law infringed on fundamental rights further than was reasonably necessary.

Protestors use a rope to lower themselves from a pedestrian bridge to waiting motorbikes in order to escape from Hong Kong Polytechnic University late Monday. (AP)

Many protesters wear masks to shield their identities from surveillance cameras that could be used to arrest and prosecute them. The ban has been widely ignored, and police have charged protesters with wearing masks.

The protests started peacefully in early June, sparked by proposed legislation that would have allowed criminal suspects to be extradited to the mainland. But by the time the bill was withdrawn, the protests had hardened and broadened into a resistance movement against the territory’s government and Beijing.

A police officer prepares to fire tear gas canisters during a clash with protesters near the Hong Kong Polytechnic University in Hong Kong on Monday. (AP)

Activists see the extradition bill as an example of Hong Kong’s eroding autonomy under Beijing’s rule since the 1997 handover from colonial power Britain.