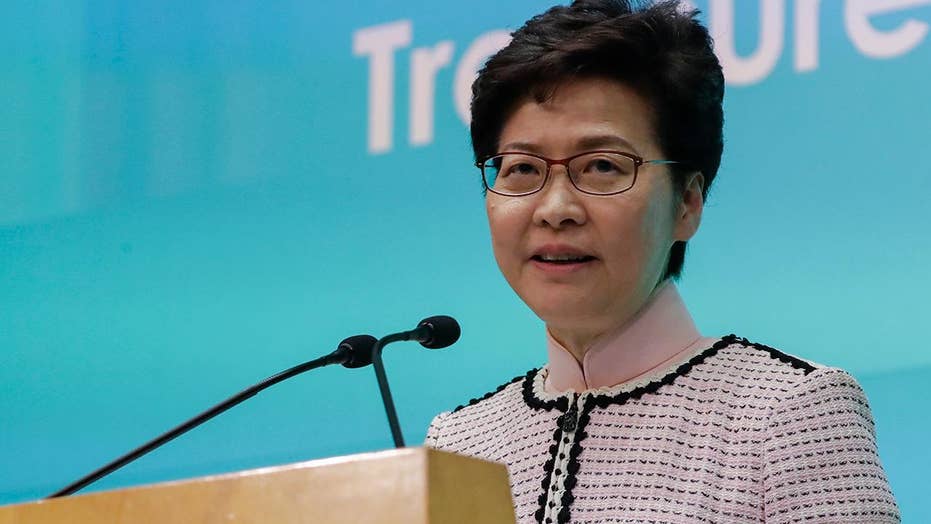 Embattled Hong Kong leader Carrie Lam was forced to stop her annual address before the Legislative Council multiple times Wednesday, as pro-democracy lawmakers shouted her down repeatedly and clamored for her resignation.

Lam eventually delivered her address by video an hour later, but the hostile reception was seen as a slap down for the nation’s leader.

The pro-democracy lawmakers wasted little time once Lam began speaking, assailing her as “the mother of the mafia police,” holding placards and showing waving hands colored in blood red.

Protesters also used a projector to light up her face and the wall directly behind her, stating their key demands.

After 20 minutes, Lam left the chamber before returning. She was turned back, however, as protesters attacked her with additional fury, resulting in the council president halting the session a second time as she left.

More than an hour after the scheduled start of the address, Lam eventually delivered her speech via video surrounded by China’s yellow-starred flag to her right and Hong Kong’s flag to her left.

As the protests entered their fifth month, Lam addressed the semi-autonomous Chinese territory as going through a “major crisis,” saying, “People are asking: Will Hong Kong return to normal?"

In her video address, Lam appealed for Hong Kong’s 7.5-million citizens to “cherish the city,” warning “continued violence and (the) spread of hatred will erode the core values of Hong Kong."

“Continued violence and (the) spread of hatred will erode the core values of Hong Kong.”

Her address detailed plans to tackle the nation’s shortage of affordable housing as well as other welfare issues, and focused on infrastructure issues, including the building of new tunnels and land development.

In a subsequent news conference, Lam again insisted she will not resign, insisting freedoms enjoyed by Hong Kong’s residents had not been eroded.

SEN. HAWLEY: 'NEWS FLASH' FOR LEBRON, 'PEOPLE ARE BEING HARMED' BY CHINA IN HONG KONG

“Hong Kong is still a very free society,” she said.

Prior to her speech, Claudia Mo, one of the protesting lawmakers, dismissed the address as a “shame and sham,” insisting Lam had lost all authority.

“She’s just a puppet on strings, being played by Beijing,” Mo said at an impromptu news conference outside the legislative chamber.

"This is the only way we can have a good future,” Chan added.