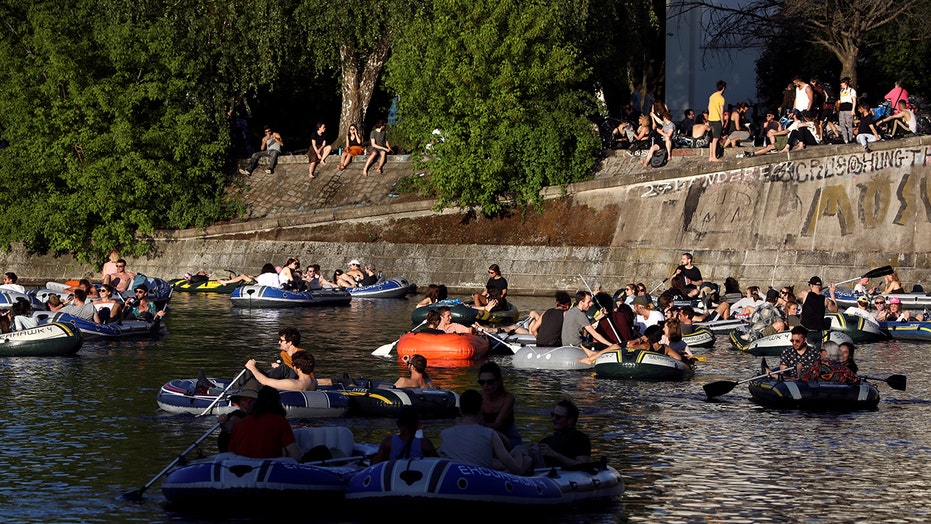 The number of coronavirus cases is once again on the rise in Germany just days after the country began easing additional lockdown measures, according to Saturday’s report from the country’s public health agency.

German police, meanwhile, said more than 130 people were detained when protests turned violent in Berlin and other cities on Saturday. Thousands took to the streets across the country to demand the lockdown, which has been in place since mid-March, be lifted even quicker.

The Robert Koch Institute (RKI), Germany’s federal disease control and prevention agency, said in its daily bulletin Saturday that the country’s reproduction (R) rate, which measures the number of people each confirmed COVID-19 patient now infects, has risen to 1.1, Reuters reported. Once the figure exceeds 1, that means the number of cases nationwide is on the rise.

FILE PHOTO: People enjoy sun on boats, on the Landwehrkanal, amid the spread of the coronavirus disease (COVID-19), in Berlin, Germany, May 9, 2020. REUTERS / Christian Mang/File Photo - RC2KLG9G2UGA

In its report on Sunday, RKI recorded 667 new coronavirus cases, which brought the nationwide tally of confirmed infections to 169,218. At least 26 new deaths were recorded, making a total of 7,395 coronavirus fatalities nationwide.

Despite its large caseload, Germany has kept the death toll far lower than in other European nations stricken with the virus in part due to widespread, early testing, lockdown measures and its well-funded and operated health care system, according to Reuters.

After meetings with leaders from Germany’s 16 states, Chancellor Angela Merkel announced Wednesday the country would begin easing its lockdown restrictions, allowing shops to reopen and school children to gradually return to classrooms. Germany’s football league system, Bundesliga, was cleared to restart as early as May 16.

Merkel added she would launch an “emergency brake” to require local officials to reinstate lockdown measures should infections rise above a threshold of 50 per 100,000 people, the BBC reported.

Karl Lauterbach, a Social Democrat lawmaker and professor of epidemiology in Germany, took to Twitter on Saturday to lament that large crowds observed in his home city of Cologne could contribute to infections picking up again in the country, Reuters reported.

“It has to be expected that the R rate will go over 1 and we will return to exponential growth,” Lauterbach tweeted. “The loosening measures were far too poorly prepared.”

More than 3,000 protesters – flouting social distancing measures – gathered peacefully in Munich on Saturday accusing the government and medical professional of inciting panic and prolonging the lockdown to infringe on their rights, German broadcaster Deutsche Welle reported.

At least 131 people were arrested after two separate protests in Berlin were broken up by police after some demonstrators began throwing bottles at officers, Euro News reported.

Police said another 23-year-old man was arrested in the western city of Dortmund after allegedly attacking a TV crew. Protesters in Cologne allegedly were encouraging those entering newly reopened shops to remove their face mask, according to authorities.

Meanwhile, Germany’s interior minister is making an exception for cross-border entry to allow children who live outside Germany to enter the country for a Mother's Day visit.

The country’s pandemic restrictions currently forbid entry into the country except for “compelling reasons” such as work. This would have prevented families that live across the border from visiting Sunday on Mother's Day.

But Interior Minister Horst Seehofer approved a decision by border police to include filial visits on Mother's Day to the list. Like cross-border commuters, they will also be exempt from the rule that requires people entering Germany to quarantine for two weeks.