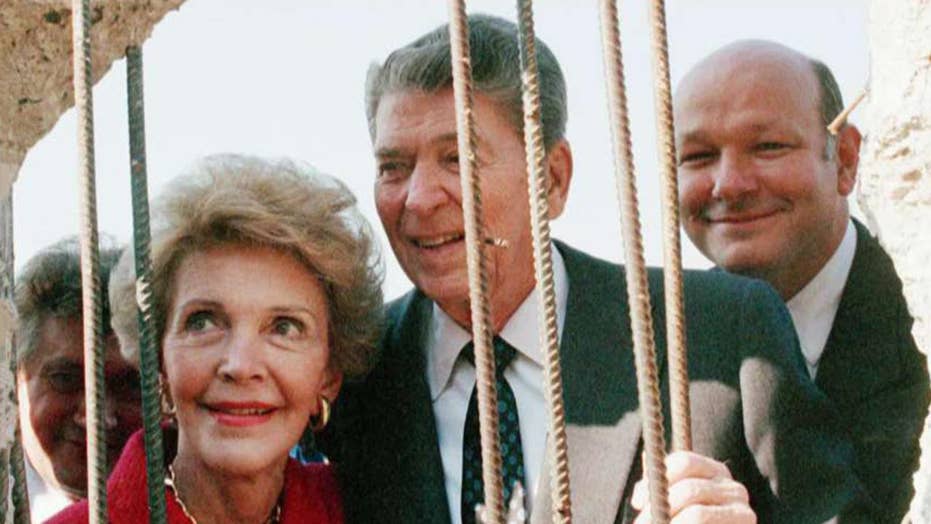 World marks 30th anniversary of the fall of the Berlin Wall

Ronald Reagan biographer Craig Shirley on President Reagan's role in the fall of the Berlin Wall and the collapse of Soviet Communism.

A German group is sending a not-so-subtle message to President Trump on the 30th anniversary of the fall of the Berlin Wall.

The Wall against Walls initiative, a project of the non-profit Die Offene Gesselschaft (The Open Society), are planning to gift the White House with a 2.7-ton remnant of the Cold War relic, Quartz reported.

The concrete slab will arrive at the White House on Saturday, although it's unlikely the Trump administration will accept as it contains a letter reminding the president of "America's commitment to build a world without walls."

"We would like to give you one of the last pieces of the failed Berlin Wall to commemorate the United States' dedication to building a world without walls," the letter, apparently painted on the concrete fragment, reads. It's signed by the "Citizens of Berlin."

The group's website offers visitors the opportunity to sign the letter to Trump.  As of Friday afternoon, the letter had garnered around 1,800 signatures online.

In an apparent rebuke of Trump's immigration policy, the letter decried how people died trying to cross the Soviet-era wall -- "their only crime being their desire to be free."

"Today, the world celebrates the 30th anniversary of the fall of the Berlin Wall. Germany is united again and in Berlin only a few scattered pieces remind us that no wall lasts forever," it reads.

"For decades the United States played a major role in bringing this wall down. From John F. Kennedy to Ronald Reagan, the Presidents of the USA fought against it. We would like to give you one of the last pieces of the failed Berlin Wall to commemorate the United States' dedication to building a world without walls."

Trump's wall was one of his top campaign promises and has become a symbol of his immigration policy. It's also a major source of tension between him and Congressional Democrats and served as a sticking point when the government shut down at the end of 2018.

Saturday marks the 30th anniversary of the East German government announcing that the border between communist East Berlin and democratic West Berlin, demarcated by the Berlin Wall, was open.

The Brandenburg Gate, on the East Berlin side of the Wall, was the backdrop for President Ronald Reagan's famous 1987 speech when he challenged Soviet leader Mikhail Gorbachev to go further with the reforms he was instituting.