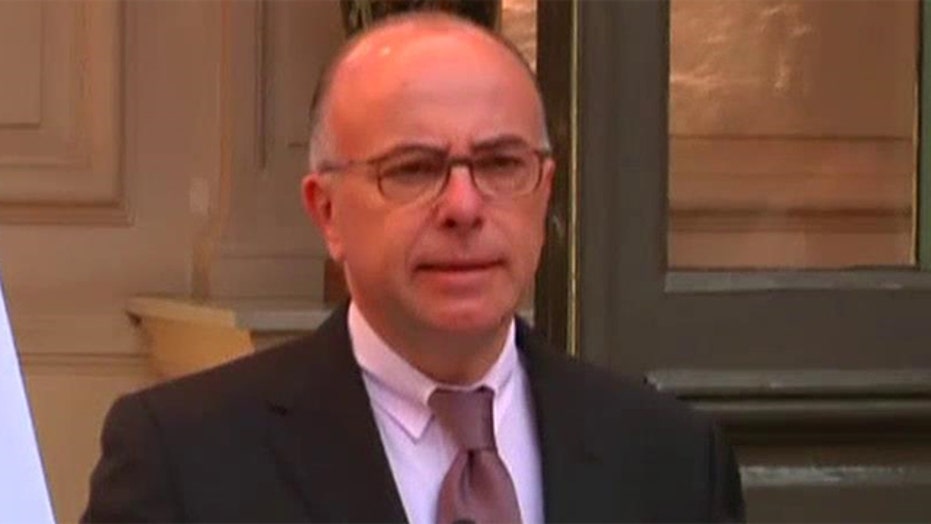 A suspected Islamic terrorist's plans to mount attacks on French churches were thwarted when he accidentally shot himself and called an ambulance, leading to the discovery of loaded guns, bulletproof vests and chilling notes about his intended targets, authorities said Wednesday.

French police believe the 24-year-old Algerian native was planning an imminent attack Sunday on one or more French churches in Paris when he shot himself, France’s top security official announced Wednesday. The suspect, who was not named, is a computer science student who was flagged as a risk by security officials last year, said Interior Minister Bernard Cazeneuve. He is also accused in the death of a young mother.

A French security official, who was not authorized to publicly release details, said the suspect was arrested in Paris after he apparently shot himself by accident and called for an ambulance. He was waiting outside for first aid when police arrived at the scene.

Sources told AFP that the suspect was found Sunday with a bullet in his leg and said he was wounded in some sort of dispute. The man was treated for a leg wound and remained hospitalized on Wednesday.

"Detailed documents that were also found established beyond doubt that the individual was planning an imminent attack, probably on one or two churches."

Police who arrived at the scene found a blood trail leading to his car, with loaded kalashnikov rifles, bulletproof vests and notes about potential targets inside.

Documents in Arabic found in the suspect's apartment had links to Al Qaeda and the Islamic State, French Prosecutor Francois Molins said. The suspect was given an order by an accomplice in Syria to target a Christian church, he added, and will be kept in custody for at least six days.

The documents "established beyond doubt that the individual was planning an imminent attack, probably on one or two churches," Cazeneuve said, according to Reuters. In the man's apartment, in southeastern Paris, more weapons were found as well.

Aurelie Chatelain, a 32-year-old Frenchwoman visiting Paris for a training session for her work, was found shot to death on Sunday morning in her car. The security official said Chatelain appeared to have been killed at random and ballistics evidence linked her death to the suspect.

"Our thoughts and sorrow are with her relatives, her family, and her daughter now deprived of her presence,” Cazeneuve said.

Chatelain came to the area from northern France to take a pilates course and had written on Facebook the night before her death how happy she was to be there, AFP reports.

Her body was discovered by passersby as smoke poured out of her car from an overheating laptop.

Cazeneuve said the suspect had previously come to the attention of French authorities as possibly wanting to travel to Syria, Reuters reports.

Police made checks on the suspect in 2014 and this year, but did not find anything to warrant a further investigation.

France has been on edge since the Jan. 7-9 attacks on the satirical newspaper Charlie Hebdo and a kosher supermarket left 20 people dead, including the three gunmen.

An attack on a church would mark a new type of target in France, where Jewish sites have been under increased protection since both the 2012 attack on a Jewish school and the killings at the kosher supermarket. But extremists have targeted Christians in the Middle East, most recently on Sunday when a video showed Islamic State militants in Libya killing groups of captive Ethiopian Christians and another released in February showing the deaths of captured Egyptian Christians.

The thwarted attack was announced hours before Cazeneuve met with executives from top Internet companies, including Google and Twitter, to talk about the government's plan to increase online surveillance and block jihadi propaganda.