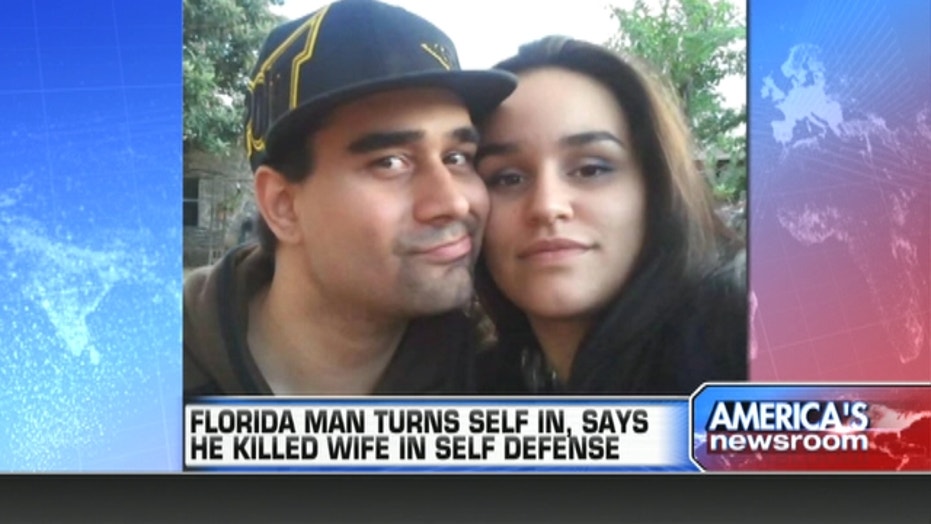 Derek Medina shot his wife in his South Miami kitchen and then posted a photo of her body on Facebook.

A 31-year-old Florida man turned himself into police Thursday after he allegedly shot his wife to death and then posted a photo of his 26-year-old wife's body slumped on the floor on Facebook.

Derek Medina also posted a status to his Facebook friends that was as chilling as the photograph that followed it.

"Im going to prison or death sentence for killing my wife love you guys, miss you guys takecare Facebook people you will see me in the news," said the Thursday morning post on Derek Medina's Facebook page.

Miami-Dade police said Medina turned himself in to police after Jennifer Alfonso was fatally shot inside the couple's home in South Miami, a suburb of Miami. When officers responded to the home, they found Alfonso's body, as well as her 10-year-old daughter, who was unharmed.

According to the affidavit, the 6-foot-2, 200-pound Medina said the couple became involved in a heated argument in an upstairs bedroom when he armed himself with a gun and pointed it at her. He said Alfonso left the bedroom, returning later to say she was leaving him.

He says he went downstairs and confronted her in the kitchen, when she began punching him. He claims he went back upstairs to get his gun and confronted her again, at which time she grabbed a knife. Medina said he was able to disarm her and put the knife in a drawer, but that when she began punching him again, he shot her several times, the affidavit says.

The post about the slaying on a Facebook page identified as Medina's went out to friends at 11:11 .a.m. Thursday.

The post claimed that his wife was punching him and that he wasn't going to stand any more abuse. However, YouTube videos linked to his Facebook page earlier this week show him working out in a martial arts studio, punching and kicking a heavy bag.

The next and final post -- also at 11:11 a.m. and titled "Rip Jennifer Alfonso" -- was a gruesome photograph showing a woman in black leotards slumped on the floor. She looked like she had fallen backward from a kneeling position, with her legs bent to her sides and blood on her left arm and left cheek. The photo was up for more than five hours before Facebook removed the page late Thursday afternoon.

A Facebook spokeswoman said in an email to The Associated Press that she couldn't comment on a law enforcement investigation but could provide a general comment from the company.

"The content was reported to us," the spokeswoman wrote. "We took action on the profile -- removing the content and disabling the profile, and we reached out to law enforcement. We take action on all content that violates our terms, which are clearly laid out on our site."

Public records show that Medina and Alfonso first married in January 2010, divorced in February 2012 and then remarried three months later. Medina bought the condominium unit where the couple lived in March 2012 for $107,000.

On his Facebook page, Medina claimed to be a supervisor at a property management company and to have appeared in the Miami-based crime drama "Burn Notice," though his name doesn't appear in online credits for the show.

On a personal blog to which the Miami Herald linked, someone named Derek Medina touted e-books of his on subjects ranging from saving marriage through communication to "humans who are gifted and can see the supernatural spirit ghost world we live in."

One book was titled: "How I Saved Someone's Life and Marriage and Family Problems Thru Communication."

"The author was with his wife in New York and his wife was attacked by a ghost," he writes when describing his supernatural ghost world e-book. "She was seeing a ghost and was being taunted and messed with. She informed her husband and he told her to go to sleep and he would watch over her. Minutes later he was attacked by a demon ghost and he was sick and throwing up."

Photos posted by Medina a day before the killing show the family enjoying a meal alongside an unnamed marina and lounging beside a swimming pool.

Police said in the arrest affidavit that Medina never called 911, only turning himself in to police after going to see family and confessing.

Thursday night, police had taped off the area around the condo complex where the couple lived. The complex is made up of yellow-peach colored townhouses with faded wood roofs.

Several cars filled the parking area in front of the townhouses as police questioned neighbors and possibly friends of the victim. Some of those gathered were crying.

"I met him a couple of times. He seemed like a pretty nice guy," Eby said. "But I don't remember her at all."

It wasn't immediately clear if Medina had an attorney.