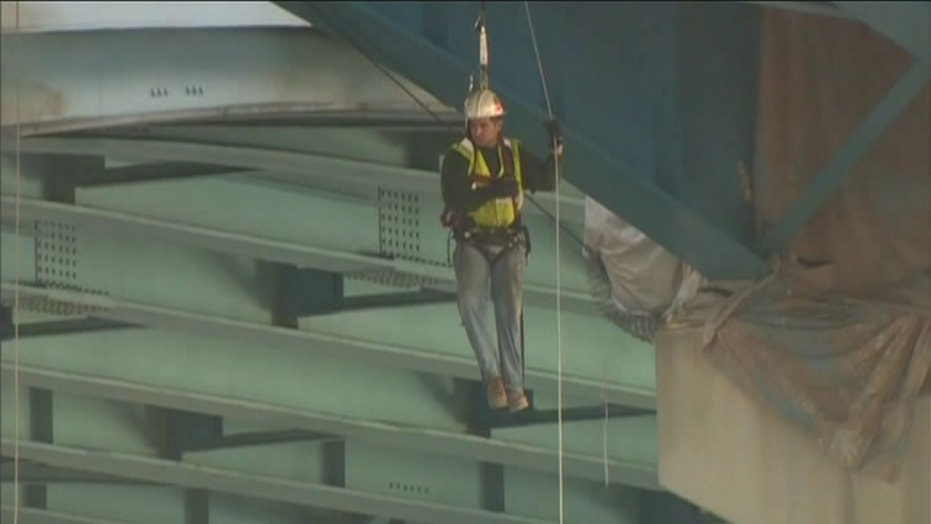 Workers Left Dangling In The Air After Scaffolding Crashed Down

Four construction workers laboring in Florida were suddenly caught in a life-or-death situation after their scaffolding came crashing down.

FORT LAUDERDALE, Fla. – Four construction workers laboring underneath the ever-busy Interstate 95 overpass in Fort Lauderdale were suddenly caught in a life-or-death situation after their scaffolding came crashing down on Monday.

Fire rescue officials said the collapse occurred around 3:30 p.m. where the CSX railroad track crosses the New River, just south of Davie Boulevard, in Fort Lauderdale. Four workers were on the scaffolding when it collapsed and landed in the water and on the railroad.

"We heard a pop, we heard guys screaming," said witness Dan Carrara. "I turned around, I saw the scaffolding falling down."

"The cables that were lifting the scaffolding just snapped," said Rafael Moreno, one of the workers who suddenly found themselves hanging about 100 feet in the air in harnesses. "We don't know [what's happening], it was so fast. There were four [cables], one in each corner. Three of us were hanging and I see my buddy falling on top of the scaffolding."

The worker who fell on top of the scaffolding sustained serious injuries. He was rushed to Broward Health Medical Center as a trauma alert.

Crews later retrieved two of the workers suspended in the air second and transported them to Broward Health.

"I just wanted to get down," said Moreno. "It was a scary feeling, you know. After that, I had to have patience."

As he remained suspended after his colleagues had been brought down, Moreno's mind started racing. "I'm thinking about family, my mom, my brothers and sisters, everything," he said, "Just trying to get down to the ground."

Rescuer James Chioffe retrieved Moreno. "When you talk to him, you want to make him feel comfortable, get him the confidence that we know what we're doing and we're going to make it home safely," he said.

Chioffe said that working 100 feet from the ground while the Tri-Rail was crossing nearby was no easy task. "You're all the way up there on a catwalk that's moving, every car you can hear, every truck you can hear, the train blasts its horns, you hear everything shaking," he said.

After an hour and a half, Moreno was finally lowered to the ground. He said he will never forget his dangerous day on the job. "I just want to go home and relax, you know?" he said. "I'm glad everybody's all right."

All three workers left dangling in the air were taken to Broward Health for observation and were later released. The worker who fell to the ground remains in the hospital and is expected to survive.

The cause of the collapse remains under investigation.

For more stories go to wsvn.com