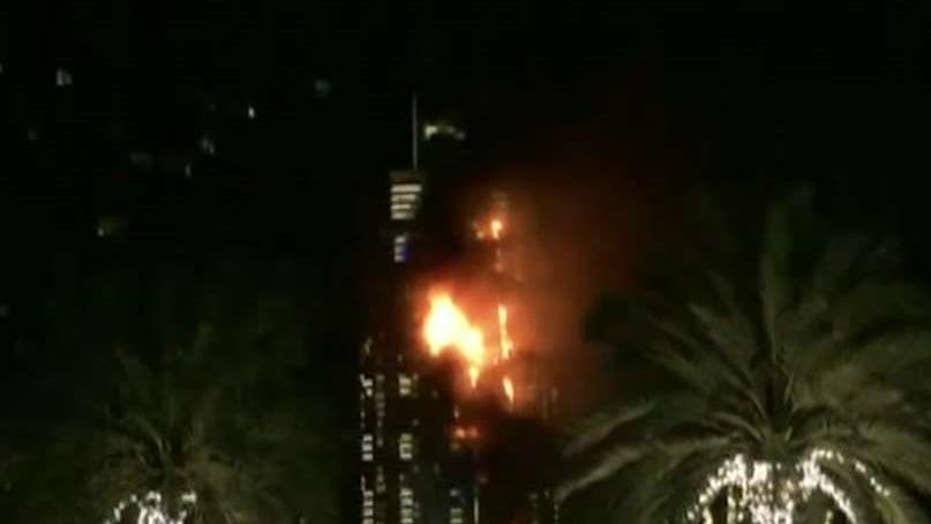 More than a dozen people were hurt after a massive fire broke out at a luxury hotel in Dubai just blocks from the world's tallest skyscraper and the site of a New Year's Eve fireworks show drawing crowds of thousands.

The fire continued to burn as fireworks exploded in the sky at midnight. The flames apparently first erupted outside the 20th floor of the 63-story Address Downtown Dubai, according to officials there.

Burning debris rained down from the building as trucks raced to the scene and workers evacuated people inside. The cause was unclear.

Our whole hotel has just gone up in flames just as we was about to tuck in to our NYE dinner #TheAddress #Dubai pic.twitter.com/PqIpxVP2wn

City officials said as many as 16 people suffered injuries linked to smoke inhalation and overcrowding, but most injuries were minor. They said they were working to move guests to other hotels.

Organizers expected a million people to attend the fireworks show. The fire broke out about two hours before midnight.

The Address Downtown Dubai has 626 luxury apartments and 196 hotel rooms, according to Skyscraper Center, which tracks such buildings. The hotel towers over the Souq Al Bahar, a popular shopping area with walkways that connect the Burj Khalifa and the Dubai Mall.

Nurse Stuart O'Donnell said he and others in the crowd wondered what had started the blaze. "I do feel suspicious of when a fire breaks out on New Year's Eve," he said.

The fireworks show began at the Burj Khalifa, which organizers said was fitted with 400,000 LED lights. They said they set up 1.6 tons of fireworks for the display.

The world-famous Burj Khalifa is more than 2,700 feet tall.