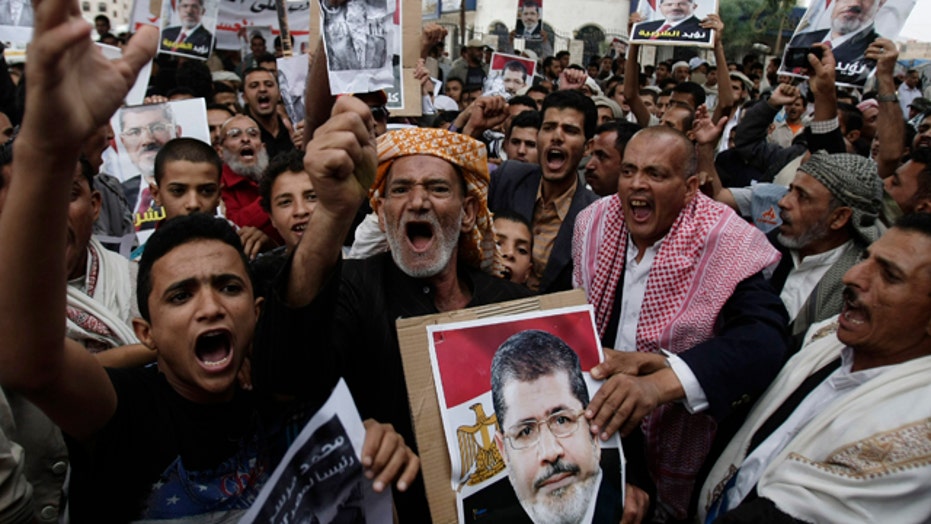 CAIRO – Europe's top diplomat urged Egypt's interim government to reach out to the Muslim Brotherhood as she worked Monday to mediate an end to the country's increasingly bloody crisis, while the mainly Islamist protesters calling for the return of ousted leader Mohammed Morsi massed for more protests.

It was European Union foreign policy chief Catherine Ashton's second visit to Cairo since Islamist President Mohammed Morsi was toppled by the military nearly a month ago, underscoring the urgency felt after violence that has killed more than 260 people.

But any hope of political reconciliation appears distant, with repeated street battles. At least 83 Morsi supporters were killed in clashes with security forces early Saturday near the site of their main Cairo sit-in. Security officials have spoken of taking the potentially more explosive step of clearing that sit-in and others by Islamists.

So far, Morsi's Muslim Brotherhood and its allies have rejected any dealings with the military-backed civilian government set up after the army removed the president. They say the only solution is for Morsi to be returned to office.

The government, meanwhile, is pushing ahead with a transition plan supposed to lead to new elections early next year. At the same time, security officials and pro-military media have increasingly depicted the Islamists' protests as a threat to public safety because of armed men among the rallies.

Ashton met separately with the two sides. After their talks with her, a delegation of Islamist politicians representing the pro-Morsi camp said those now in power must take the first step toward any reconciliation by releasing jailed Brotherhood leaders and stopping media campaigns against Islamists.

"Creating the atmosphere requires those in authority now to send messages of reassurance," Mohammed Mahsoub, of the Islamist Wasat Party, told reporters.  "Everyone is looking for a solution. We urge everyone to think ... because this is the moment of solutions."

Speaking alongside a Brotherhood official and another Islamist politician, he did not mention the demand of Morsi's return, though he appeared to be sticking by it by saying any solution must be on a "constitutional basis."

Undeterred by the weekend's bloodshed, the Brotherhood gathered supporters for more rallies outside security facilities on Monday evening during which they plan to carry empty coffins as a symbol of their dead. They have also called for another round of mass protests Tuesday under the banner "Martyrs of the Coup," and have set up a tent a block away from their main sit-in for prayers for those killed over the weekend.

The Interior Ministry has vowed to take decisive action against anyone who violates state property, raising fears of more bloodshed.

The Brotherhood has called the clashes Saturday a "massacre." Human Rights Watch and field doctors interviewed by The Associated Press said many were killed by gunshots to the head and chest. The Interior Ministry its policemen only fired tear gas, though witnesses say security forces also used live ammunition and birdshot.

Police moved in on the protesters after they sought to expand their sit-in onto a nearby boulevard, blocking it. Security officials said Monday that a police captain died of wounds sustained during those clashes after being hit in the eye with birdshot from protesters. The officials spoke on condition of anonymity because they were not authorized to brief the media.

On Monday, 10 prominent local rights groups called for the dismissal of Interior Minister Mohammed Ibrahim, who heads the police forces. Ibrahim was a Morsi appointee who was kept in his post in the newly formed interim Cabinet.

The groups, which include the Cairo Institute for Human Rights Studies and the Egyptian Initiative for Personal Rights, also said that during Morsi's rule and since his fall, his Brotherhood supporters have engaged in political violence, torture and assaults on peaceful protesters, artists, media personnel and rights workers.

"The political circumstances of the massacre are well known, but the common denominator between it and other similar incidents is the lack of real accountability for the perpetrators of past killings, assassinations, and torture," the rights groups said.

The clashes came after millions took the streets to show their support for military chief Gen. Abdel-Fattah el-Sissi. The mass turnout followed a call from el-Sissi, who also is defense minister, for rallies to give him a mandate to deal with violence and "potential terrorism" -- a thinly veiled reference to expected crackdowns on Morsi supporters who are holding sit-in camps in Cairo.

The military, led by el-Sissi, pushed Morsi from power July 3 after mass protests by millions of Egyptians demanding the president step down after a year in office.

The EU foreign policy chief, Ashton, said she was reinforcing to all sides that the transition process must include "all political groups, including the Muslim Brotherhood."

"I will also repeat my call to end all violence. I deeply deplore the loss of life," she said in a statement before her arrival.

She held talks with el-Sissi, Vice President Mohamed ElBaradei and interim President Adly Mansour. She also met with members of grassroots youth-led protest groups such as April 6 and Tamarod. Tamarod, Arabic for "Rebel," was a main organizer of the mass protests that led to the coup.

After meeting with Ashton, Mahmoud Badr of Tamarod said he asked her to condemn all armed sit-ins.

"We don't know how responsive the Brotherhood is to this," he said. "We have no intention of going back one step... They must break up these sit-ins and hand in their wanted leaders."

One of the thorniest issues toward reconciliation post-coup is the detention of several Brotherhood leaders and other prominent Islamists since Morsi's ouster.

The circle of those in custody expanded Sunday after authorities arrested two figures from the Brotherhood-allied Wasat Party and took them to the capital's Tora prison. The party condemned the arrest of its leaders, saying such measures exacerbate the crisis and add new obstacles to efforts to build bridges.

Morsi has been held incommunicado by the military at an undisclosed military facility. Last week prosecutors announced they were investigating him on charges of murder and conspiring with the Palestinian militant group Hamas to carry out an attack on a prison during the 2011 uprising against autocrat Hosni Mubarak. The jailbreak allegedly led to the deaths of inmates and broke Morsi and around 30 other members of the group out of detention.

The president's spokesman Ahmed el-Muslemani said "Morsi is not a political prisoner" and the judiciary is handling his detention.

In a snub to his Hamas rivals, Palestinian President Mahmoud Abbas met Monday with Mansour in Cairo in a show of support for the new government. Egyptian authorities have imposed the toughest border restrictions on the Hamas-run Gaza Strip in years, sealing smuggling tunnels and blocking most passenger traffic.