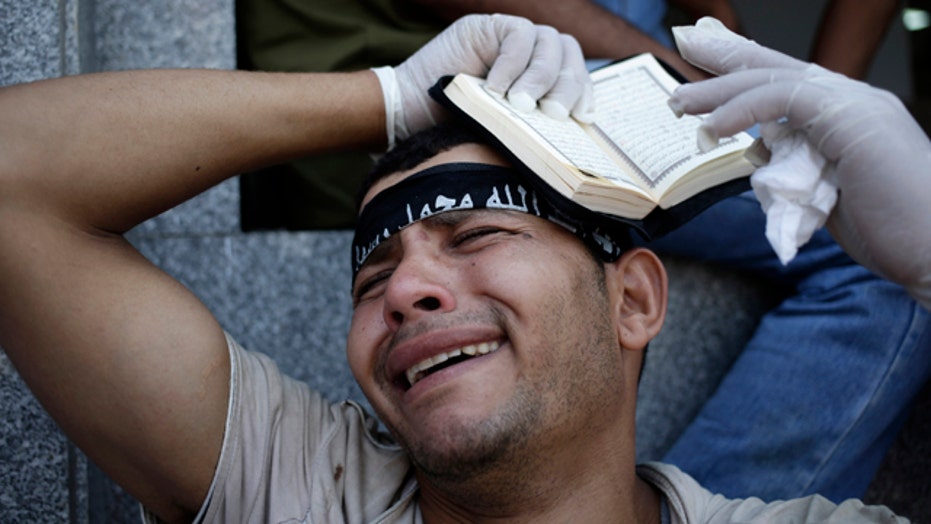 At least 70 killed in violent clashes in Cairo

Egypt's interim president says he has given the prime minister the power to grant the military the right to arrest civilians after a weekend of violence between supporters of the country's deposed leader and security forces left at least 72 dead.

Government officials say the decision could be a prelude to a major crackdown on Mohammed Morsi's supporters or militants who have stepped up attacks against security forces in the Sinai Peninsula. The officials spoke on condition of anonymity because they were not authorized to speak to the media.

Protesters calling for Morsi's reinstatement have vowed to continue a massive sit-in that has been ongoing for three weeks.

In a Sunday statement, Khaled el-Khateeb, head of the ministry's emergency and intensive care department, said 792 people were wounded in the weekend protests.

In addition to the violence in Cairo and Alexandria, Reuters reported that 15 people were injured in the Suez Canal city of Port Said, as pro- and anti-Morsi demonstrators fired birdshot at each other.

The Cairo violence took place when pro-Morsi protesters sought to expand their sit-in camp by moving onto a nearby main boulevard, only to be confronted by police and armed civilians. In the clashes early Saturday, witnesses and wounded protesters say police fired at the pro-Morsi crowd. Many of those killed were shot in the head or chest, according to doctors.

It is the highest death toll in a single incident since the military ousted Morsi on July 3 following days of mass protests against him.

Yehia Mikkia said early Saturday that the clashes have overwhelmed the field hospital operating from the sit-in where the protesters have been camped out.

A Reuters reporter at the scene saw 20 bodies under white sheets laid out on the floor of the field hospital. Other bodies were taken to different hospitals and as many as 1,000 people had been injured, Muslim Brotherhood spokesman Gehad El-Haddad told Reuters.

"They are not shooting to wound, they are shooting to kill," Haddad said. "The bullet wounds are in the head and chest."

The clashes erupted following a day when millions took to the streets answering a call from the army chief, who said he wanted a mandate to stop "potential terrorism" by Morsi supporters.

Called out by the army, the largest crowds in 2 1/2 years of upheaval filled Egypt's streets Friday, while Morsi was formally placed under investigation on a host of allegations including murder and conspiracy with the Palestinian militant group Hamas.

Morsi's supporters also showed no signs of backing down, though they turned out in vastly smaller numbers. The demonstrations in Cairo were mostly peaceful into the evening. But by late Friday night in Cairo, A field hospital doctor said seven protesters were killed and hundreds injured.

Haddad told Reuters police started firing repeated rounds of tear gas after 3:00 a.m. Saturday. He said "special police forces in black uniforms" fired live rounds and snipers shot from the roofs of university buildings and a bridge in the area.

State news agency MENA quoted an unnamed security source as saying that no firearms were used to disperse protesters, according to Reuters. He said only tear gas was used.

In the city of Alexandria, seven people were killed and over 100 were injured in clashes between supporters and opponents of Morsi, officials said.

The announcement by prosecutors of the investigation against Morsi, which is likely to pave the way to a formal indictment and eventually a trial, was the first word on his legal status since he was deposed by the military July 3. Since then, the Islamist leader has been held incommunicado in a secret location.

Egypt's MENA news agency said Morsi was being investigated over allegations of collaborating with Hamas "to carry out anti-state acts, attacking police stations and army officers and storming prisons, setting fire to one prison and enabling inmates to flee, including himself, as well as premeditated killing of officers, soldiers and prisoners."

Both sides have tried to show how much public support they enjoy. But the millions who turned out for the pro-army demonstrations Friday overwhelmed the streets in multiple cities in Egypt, including some that rarely seen any rallies since the 2011 uprising.

Portraits of the smiling army chief Gen. Abdel-Fattah el-Sissi in sunglasses dominated the crowd in Tahrir and one near the presidential palace across town. Posters with his picture were emblazoned with the words "the love of the people," and demonstrators wore small photos of him around their necks or carried a picture of his face on an Egyptian one-pound note.

Security was heavy after el-Sissi vowed to protect the rallies from attacks by rivals. Tanks guarded one entrance to Tahrir and police were stationed at other parts.

"The army is here to protect the people. They don't lie," said Ezzat Fahmi, a 38-year-old in the crowd. He said el-Sissi called the rallies "so the entire world can see that the Egyptian people don't want the Brotherhood anymore."

Neither side has shown much taste for reconciliation. Islamists staunchly reject the new leadership and insist the only possible solution to the crisis is to put Morsi back in office. Meanwhile, the interim leadership is pushing ahead with a fast-track transition plan to return to a democratically elected government by early next year.

Rallies between both sides have often turned violent, with more than 180 people killed this month. The Morsi supporters and opponents blame each other for the bloodshed, and people in both camps have been seen carrying weapons.