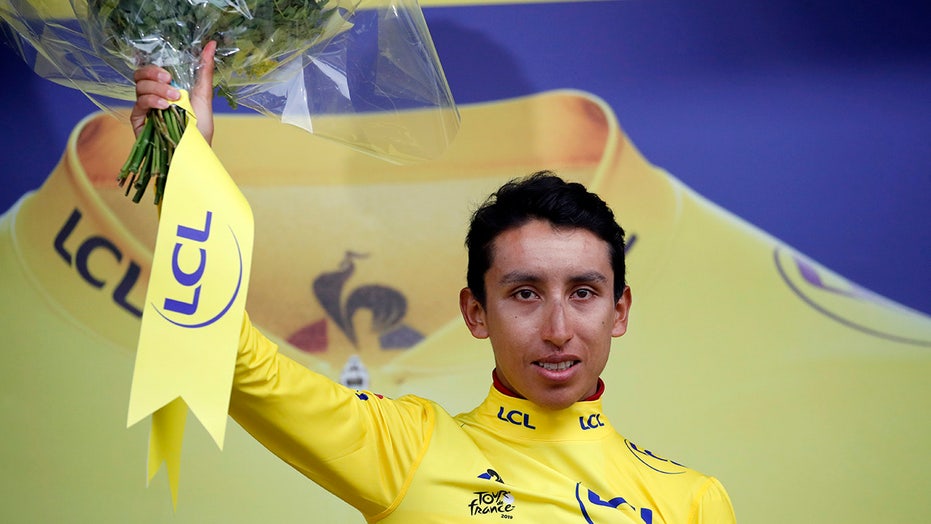 VAL THORENS, France – Perpetuating the tradition of great Colombian climbers, Egan Bernal left his mark on the Tour de France in the mountains. But unlike his flashy predecessors, he is also poised to win cycling's biggest race.

Bernal kept the yellow jersey Saturday after the last Alpine stage, and barring a crash or a last-minute health issue, he will become the first Colombian to win the Tour when it ends on Paris' Champs-Elysees with a largely processional stage on Sunday.

At age 22, Bernal will also become the youngest post-World War II winner of the Tour.

"I still need to reach Paris, but today it was incredible, I can't believe it. I will need some more days to understand what happened to me," Bernal said.

Long before Bernal was born, Colombian riders like Lucho Herrera and Fabio Parra conquered the hearts of cycling fans with long and spectacular raids in the Tour mountains. But for all their brilliance, they never came close to winning the race.

This year's route, the highest in race history with five summit finishes, including three stages finishing above 2,000 meters and only 54 kilometers of time trialing, gave natural-born climber Bernal a golden opportunity.

Unlike Bradley Wiggins, four-time champion Chris Froome and Geraint Thomas — the three other riders who won the Tour for the British outfit Ineos — Bernal is not a race-against-the-clock specialist. He has built his success on consistent performances in the Pyrenees and a tremendous attack in the Alps after losing ground in the individual time trial.

"The talent is there to see, he was born to go uphill fast," said Bernal's teammate and now deposed champion Geraint Thomas. "He has got many, many great years in front of him. A very bright future."

Thomas, lagging 1 minute and 11 seconds behind overall, should finish runner-up to give the Ineos team a 1-2 finish in Paris.

Weighing only 130 pounds, the super-light Bernal thrived in rarefied air, and it was fitting that he delivered his fatal blow in the Col de l'Iseran, the Tour's highest point this year at 2,770 meters.

A cycling star in the making, Bernal took the race lead Friday when Stage 19 was dramatically cut short by a landslide across the route to the Alpine ski station of Tignes and by a violent hailstorm that made road conditions too icy for riders racing on two wheels barely wider than their thumbs. He'd moved away from Julian Alaphilippe, the punchy rider who did more than anyone to make this Tour the most exciting in decades and held the race lead for 14 days, on a super-difficult climb to the Iseran. When the race was then stopped with Bernal racing away on the downhill, organizers decided the riders' timings to the top of the Iseran climb would be used to determine the overall standings.

And that put Bernal in yellow and on course to become the first Colombian to win the Tour.

Bernal wrapped up his victory during Saturday's Stage 20 to Val Thorens, won by 2014 champion Vincenzo Nibali. Shortened to just 36 miles because of landslide on the route, it featured a 33-kilometer climb up to the ski station that was too difficult for Alaphilippe, who cracked after starting the day in second place and allowed Steven Kruijswijk to secure a third-place finish overall.

On the road to Val Thorens, Bernal shook hands with Alaphilippe, who left his mark on the race with his unpredictable attacks and strategies. Throughout the race, Alaphilippe forced the teams of favorites to rethink their strategies as they tried to topple the Frenchman.

Worker use diggers to clean the road of the nineteenth stage of the Tour de France cycling race over 78,60 miles with start in Saint Jean De Maurienne and finish in Tignes, France.  (AP)

"I don't think it was the (race route), it was the fact that Alaphilippe started so strongly, had a good advantage and was so strong," Thomas said. "It was incredible how he stepped up and improved. A big, big well done to him. He fought until the very end. Fair play to him and his team. That was the reason why the race was raced so differently."

Ineos was not as dominant as in previous years and, in addition to Alaphilippe's bold moves, had to deal with challenges mounted by Thibaut Pinot's FDJ and Kruijswijk's Jumbo Visma. With new dynamics, the race was filled with suspense until Bernal stamped his authority for good in the Iseran.

If he wins, Bernal will achieve a feat unmatched by the Tour's greatest champions — five-time winners Eddy Merckx, Jacques Anquetil, Bernard Hinault and Miguel Indurain — who were all older when they first won.

Bernal has also proved stronger than Thomas, who threw his weight behind the Colombian heading into the penultimate stage. Bernal and Thomas crossed together in Val Thorens, with the Welshman warmly congratulating his successor.

Bernal has enjoyed a meteoric rise to the top. With barely any experience in road racing, he turned pro with the small Androni Giocattoli Pro Continental team before Ineos manager Dave Brailsford signed him two years ago following his victory at the Tour de l'Avenir, the most prestigious stage race for Under-23 riders.

After competing at his first Tour last summer and doing an impressive job in support of Thomas and Froome, Bernal was set to get a maiden leader experience at the Giro d'Italia. But he fractured his collarbone in a training crash, forcing him to miss the race and 76 days overall. He returned to competition in June to win the Tour de Suisse, another prestigious title to add to his success at Paris-Nice in March