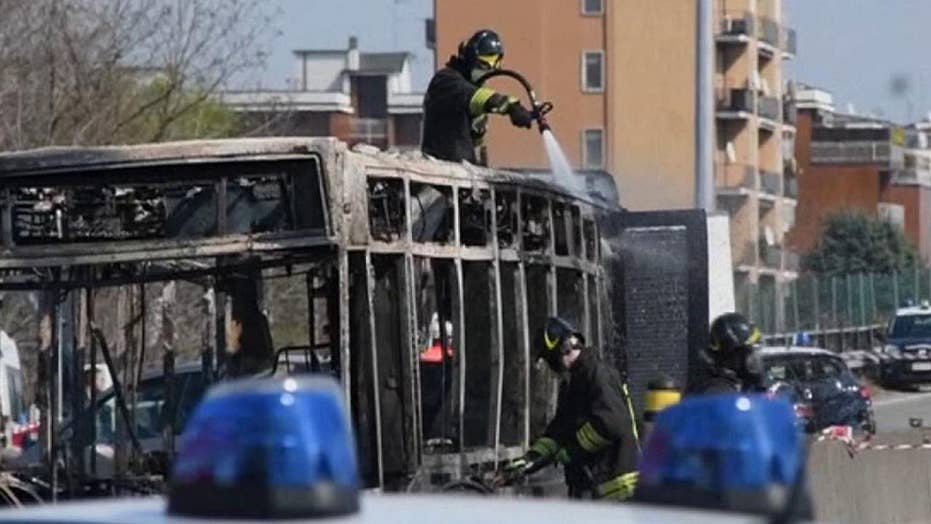 A Senegalese native angry about Italy's migrant policy hijacked a bus with 51 children and their chaperones aboard Wednesday and took them on an hour-long drive before setting the vehicle ablaze, officials said.

The driver, who is a citizen of Italy, allegedly said he wanted to kill himself and “stop the deaths in the Mediterranean,” ANSA reported.

"He wanted to get to the runway at [Milan's airport],” a girl told ANSA. "He handcuffed us and threatened us. He said that if we moved he would pour out the petrol and light the fire.”

“[The driver] kept saying that people in Africa are dying and the fault is [deputy prime ministers Luigi] Di Maio and [Matteo] Salvini,” she added.

FRANCE TO DEPLOY TROOPS TO MAINTAIN SECURITY DURING PROTESTS

The man, reportedly in his 40s, took the bus carrying two middle-school classes in Cremona province, about 25 miles from Milan, and drove for an hour before authorities intercepted the vehicle using three Carabinieri vehicles. Authorities were able to set up a roadblock based on information from an adult and a student who called a parent.

"While two officers kept the driver busy — he took a lighter and threatened to set fire to the vehicle with a gasoline canister on board — the others forced open the back door," Commander Luca De Marchis told Sky24TV.

The driver started the blaze as officers broke the glass in the back door of the bus, allowing the passengers to escape before flames engulfed the entire vehicle. Video of the incident’s aftermath showed a charred metal frame.

Some passengers were taken to the hospital for cuts and scratches.

The driver, who lived in Cremona and is married with two children, was being treated for burns.

The driver had worked for the bus company for 15 years without any employment-related issues, Sky TV24 reported. De Marchis said he had previous convictions, but he did not specify their nature other than to say they were not serious crimes.