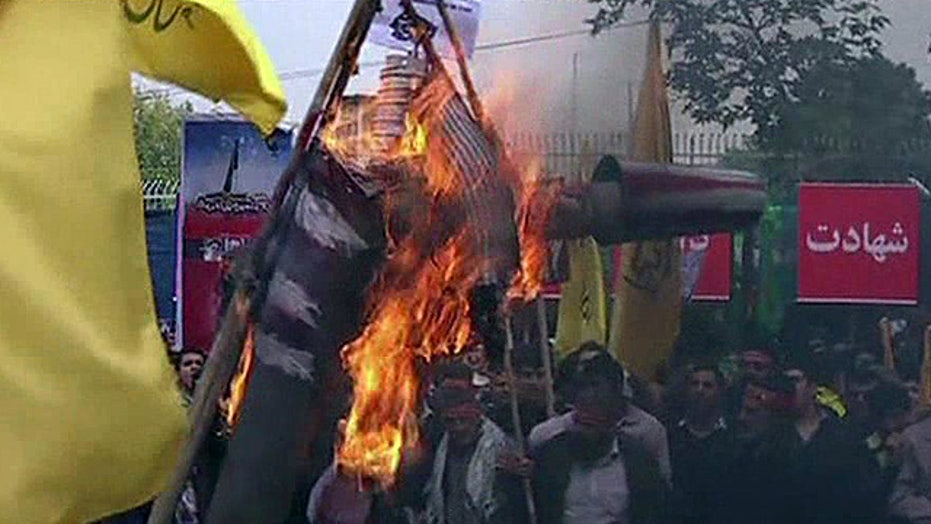 Iran protests on anniversary of 1979 US embassy takeover

TEHRAN, Iran – Tens of thousands of demonstrators packed the streets Monday outside the former U.S. Embassy in Tehran in the biggest anti-American rally in the capital in years, a show of support for hard-line opponents of President Hassan Rouhani's historic outreach to Washington.

Such protests occur every year outside the compound to mark the anniversary of the 1979 embassy takeover following the Islamic Revolution. But the latest demonstration is larger than its recent predecessors after calls by groups such as the powerful Revolutionary Guard for a major showing, including chants of "Death to America" that some of Rouhani's backers have said should no longer be used.

The crowds also send a message to Iran's Supreme Leader Ayatollah Ali Khamenei, who has cautiously backed Rouhani's overtures to the U.S. and efforts to end the impasse with the West over Tehran's nuclear program.

Opponents of thawing relations with the U.S. say they will not back down, opening the prospect of deeper internal rifts and tensions that could put pressure on Khamenei to reconsider his backing of Rouhani's groundbreaking exchanges with the U.S.

In September, Rouhani accepted from a phone call from U.S. President Barack Obama following the annual U.N. General Assembly in New York, where U.S. Secretary of State John Kerry held talks with Iran's foreign minister. Ties between the two countries were severed after the embassy siege, which began a hostage crisis with 52 people held for 444 days.

Critics of the dialogue made their views immediately known, hurling insults and eggs at Rouhani's entourage upon their return from New York. Late last month, huge banners appeared around Tehran depicting the U.S. as a sinister and deceitful adversary that seeks to weaken Iran. Tehran officials ordered the signs removed, but they appeared in poster form at the demonstration Monday outside the former embassy compound.

Protesters also stomped on images of Obama and the U.S. flag. Others carried well-known banners reading "We trample America under our feet" and "The U.S. is the Great Satan." One image showed Obama in a wrestling uniform with Star of David earrings, symbolizing Israel.

On Sunday, Khamenei appeared to chide hard-liners by denouncing any attempts to undermine Iran's nuclear negotiators. Talks with world powers are scheduled to resume Thursday in Geneva.

Diplomats "are on a difficult mission and nobody should weaken those who are on assignment," the official IRNA news agency quoted Khamenei, who has final say on all matters of state, as telling a group of students.

Iran seeks to have painful economic sanctions eased in exchange for concessions in its nuclear program to address concerns by the West, which fears Iran's uranium enrichment could eventually produce weapons-grade material. Iran insists it only seeks reactors for energy and medical applications, but has not made public its possible confidence-building offers at the talks.

Outside the former embassy's brick walls — covered with anti-U.S. murals — students carried a model of a centrifuge used in uranium enrichment. A slogan on it read: "Result of resistance against sanctions: 18,000 active centrifuges in Iran."

Another banner quoted Khamenei: "The aim of sanctions is to make the Iranian nation desperate."

Khamenei's backing of Rouhani also puts him in an unfamiliar spot of having to reassure hard-liners he has not abandoned their views.

Khamenei on Sunday praised Iranian militant students who stormed the U.S. Embassy in 1979.

"Thirty years ago, our young people called the U.S. Embassy a 'den of spies.' ... It means our young people were 30 years ahead of their time," he said, a reference to a series of reports of U.S. eavesdropping on foreign leaders, including German Chancellor Angela Merkel.

"They illegally wiretap the mobile phone of the German chancellor and the Brazilian president. They wiretap their allies and are not faithful to them. How can they compromise?" Rajabi said. "They won't compromise with us. These are lies, these are tricks to hinder our progress."