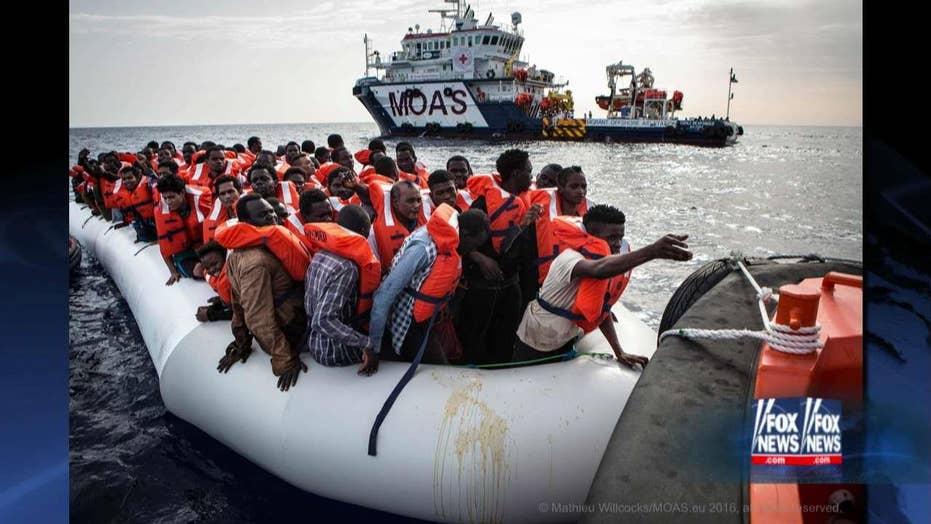 EXCLUSIVE: It was the dead of night when an 11-year-old Nigerian orphan boarded an overloaded dinghy to take on the daunting task of crossing the Mediterranean Sea to a better life in Europe.

The boy, whose name is unknown, was among 175 strangers, all trusting their lives to a battered raft and the promises of ruthless men vowing to deliver them from danger.

Hours later, the boy and his fellow passengers were plucked from rough seas by the Responder -- one of many within the waters between Northern Africa, the Middle East, and Europe -- tasked with saving those in distress on the high seas as they search for safety in Europe and beyond.

“He has no parents. No relatives. Nobody looking after him,” Jenelle Eli, a relief worker with International Federation of Red Cross and Red Crescent Societies, told FoxNews.com. “He said he was running away from ‘bad people’ in Libya. He could hardly look me in the eye, but was relieved to be out of that rubber dinghy and treated with kindness.”

Eli has worked on behalf of refugees for more than a decade, but currently she volunteered to be a part of the organization’s relief efforts in the Mediterranean in conjunction with the Migrant Offshore Aid Station (MOAS).

Vessels like the Responder patrol the waters of the Mediterranean Sea to rescue large groups of refugees. (Mathieu Willcocks)

Many of the rubber dinghies and wooden ships are found by rescue crews to be filled over capacity. (Mathieu Willcocks)

“Watching these tragedies at sea unfold over the past few years has been nothing short of heartbreaking," she said. "I can’t stop thinking about how bad things must be on land for people to risk the dangerous journey at sea.”

Eli just boarded the Responder for a three-week mission. The ship has set out to rescue refugees and migrants in danger on the choppy waters and bring them to the shores of Italy -- the closest European port. They also address urgent medical needs and ensure refugees are kept warm and fed.

Many of the refugees who cross the Mediterranean do so in tiny wooden boats or rubber dinghies and face risk of drowning, dehydration, hypothermia or being crushed from over-crowding. Eli, along with her organization, provided FoxNews.com with exclusive photos of rescue efforts, as well as harrowing stories of those they saved.

“We have welcomed more than 770 migrants onboard the Responder since I arrived,” Eli said. “The first rescue I experienced took place before 5:30 a.m. Using radar and binoculars, the crew spotted a wooden boat crammed with 31 people who were clearly in distress.”

“The new arrivals -- who were from Nigeria, Senegal, and Bangladesh -- had such anxiety on their faces, so part of my job was to help them feel secure and reassured right away,” she said.

Many of the Refugees have expressed gratitude to rescue crews for safe passage to Europe. (Mathieu Willcocks)

Once on board, migrants are fed, given clothing and provided with medical treatment.

A group of refugees found in unsafe conditions aboard a wooden ship. (Mathieu Willcocks)

The Responder patrols the waters over 12 miles out from the shores of Libya in international waters, scanning the sea for the endless fleet of vessels laden with desperate human cargo. Once they rescue those on board, they help them complete their journey to Europe, traveling 24 hours to the shores of Italy, from where they move on to various places like Germany with the hopes of a new life.

More than 3,600 people have died trying to cross the Mediterranean this year alone. Europe has felt the strain of those who made it, after allowing nearly 1 million refugees in, a number that is expected to triple in 2016.

According to figures from the United Nations High Commissioner for Refugees, the number of those displaced has reached 59.5 million worldwide at the end of 2014 -- numbers not seen since World War II.

A majority of the refugees are fleeing war and persecution in such places as Afghanistan, Syria and Iraq. But their ranks have been swollen by economic refugees from African nations such as Sudan, Sengal and Eritrea, where torture and slavery are commonplace.

Eli says she joined the Responder mission because, "Watching these tragedies at sea unfold over the past few years has been nothing short of heartbreaking. I can’t stop thinking about how bad things must be on land for people to risk the dangerous journey at sea.”

The influx has put a strain on the European Union. Since the crisis began, there has been growing strife between Greece, where many of the refugees have been entering Europe, and its partners in the EU. Greece saw more than 800,000 refugees arrive in 2015, or two-thirds of those bound for Europe last year.

Critics say allowing millions of refugees  to cross into Europe threatens the continent's safety, economy and culture. The EU has had to make hard decisions on how to absorb the influx of refugees and migrants.

Eli and others who work to help those making the harrowing journey for a better life do not focus on the politics of the issue. Instead, they work to alleviate the suffering of the people caught playing out their bit parts in a dangerous drama.

“One woman from Benin was balling her eyes out," she said. "When we tried to comfort her, she said of the sea crossing, ‘I couldn’t imagine that I would make it. When I stepped on this ship, I was overwhelmed.’”

“Hers were tears of joy.”