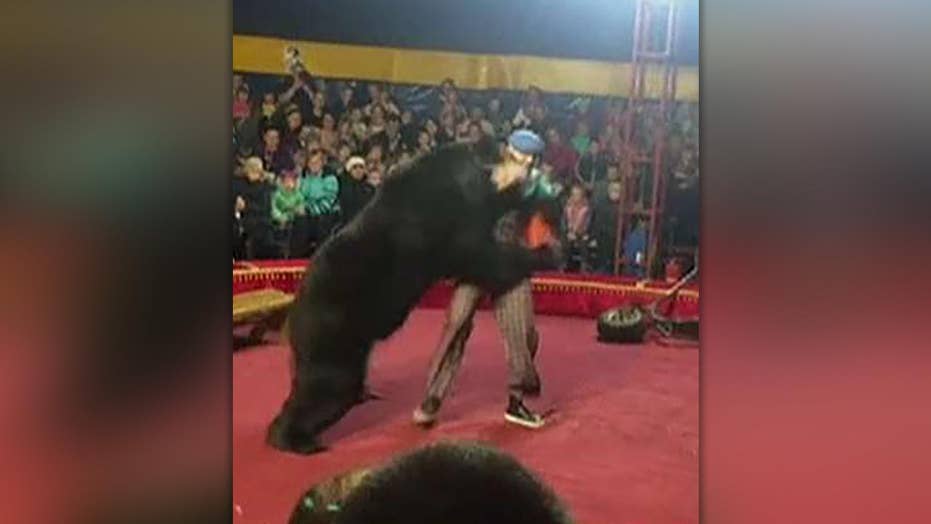 Onlookers at a Russian circus were horrified Wednesday when a 660-pound brown bear viciously attacked its handler before turning its attention to the audience, prompting officials to launch a criminal investigation.

Ruslan Solodyuk was performing with Yashka the bear in Olonets as part of an act where he orders the 16-year-old bear to stand on its two back legs and push around a wheelbarrow.

In the video taken by one spectator, the act seems to be going well until the large brown bear turns on Solodiuk and slams him to the ground while biting his arm. Another trainer attempts to intervene by kicking the animal repeatedly.

Local media reported that the bear then ventured into the audience area, just a few feet away, before it was subdued with an electric shocker.

Ruslan Solodyuk was performing with Yashka the bear in Olonets as apart of an act when the bear turned on him and attacked.  (Galina Guryeva)

FOURTH MONTANA HUNTER ATTACKED BY A GRIZZLY BEAR IN 10 DAYS

Neither the trainer nor the bear were seriously injured.

Solodyuk told the Russian news source Daily Storm that he is working with police following Thursday’s attack and that he has never experienced this in all his years working with Yashka. He attributed it to the bear being irritated.

“[Yashka] is huge (weighs [660 pounds]), sick and old - 16 years old,” a translation of his statement to the outlet read. “The animal occasionally hurts joints ... In spring and autumn, just like in people, Yasha’s problems worsen. This time the bear crouched on the stage and, apparently, felt pain.”

He said that the bear was on a leash and wore a muzzle at the time of the attack.

Solodyuk said he does not work for the circus directly and was hired for the show after finding the contracts online. He does not agree with the circus administrators who say it was the flash photography that led to the attack.