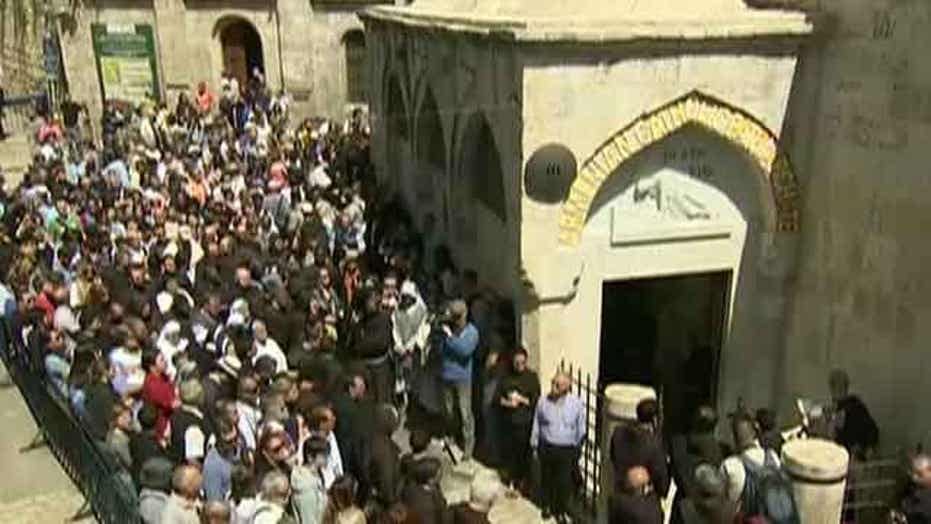 JERUSALEM – Hundreds of Christians streamed through the cobblestone alleyways of Jerusalem's Old City on Friday, hoisting wooden crosses and chanting prayers to mark the crucifixion of Jesus.

Throngs of pilgrims walked a traditional Good Friday procession that retraces Jesus' steps along the Via Dolorosa, Latin for the "Way of Suffering." They followed his 14 stations, saying a prayer at each and ending at the ancient Holy Sepulcher church.

Along the route, Franciscan friars in brown robes chanted prayers in Latin and explained the different stations to crowds through a megaphone. Leonard Mary, a priest from Irondale, Alabama, was dressed as Jesus wearing a crown of thorns. He was flanked by men posing as Roman soldiers and had fake blood dripping down his chest as he lugged a giant cross down the street.

"The most perfect love that was ever seen in the world was when Jesus died for us. He showed us the perfection of love," said Mary.

Good Friday events began with a service earlier in the morning at the cavernous Holy Sepulcher, which was built on the place where tradition holds Jesus was crucified, briefly entombed and resurrected. Clergy dressed in colorful robes entered through the church's large wooden doors as worshippers prayed in the church courtyard.

Later Friday, a service was due in Bethlehem's Church of the Nativity, built atop the traditional site of Jesus' birth. Christians believe Jesus was crucified on Good Friday and resurrected on Easter Sunday.

Roman Catholic and Protestant congregations that observe the new, Gregorian calendar, are marking holy week. Orthodox Christians, who follow the old, Julian calendar, will mark Good Friday in May.

Less than 2 percent of the population of Israel and the Palestinian territories is Christian, mostly split between Catholicism and Orthodox streams of Christianity. Christians in the West Bank wanting to attend services in Jerusalem must obtain permission from Israeli authorities.

Israel's Tourism Ministry said it expects some 150,000 visitors in Israel during Easter week and the Jewish festival of Passover, which coincide this year.