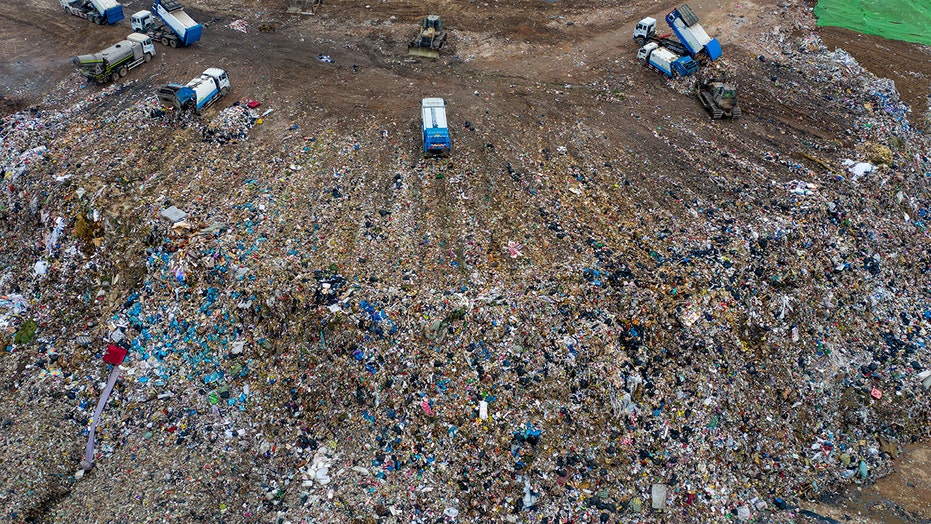 China's biggest dump is already full -- 25 years early -- after the massive amount of waste produced by the country's 1.4 billion people forced the garbage graveyard to accept four times as much trash per day as it was designed for.

The Jiangcungou landfill in the northwestern city of Xi-an was constructed in 1994 to serve more than eight million people. It was built to last until the year 2044 and encompassed 7,534,730 square feet, which is nearly the size of 100 football fields.

Instead, China reached the 50-year threshold this year.

Designed to take in 2,500 tons of trash each day, the dump received 10,000 tons of waste per day, the most of any landfill site in China, according to Sixth Tone.

Chinese workers sort out and bury kitchen waste at the Jiangcungou Landfill, which is the China's largest refuse landfill, in Xi'an city, northwest China's Shaanxi province, 21 August 2019. China's largest refuse landfill was set to close in October 2019 as it was almost saturated in Xi'an city, northeast China's Shaanxi province. The landfill was put into use in June 1994. (Imaginechina via AP Images)

“Waste [taken to the landfill] has increased nearly tenfold in the past 25 years, from 1,200 tons per day to around 10,000 tons per day,” Shen Chaofeng, whose department is in charge of the dump, told the outlet.

Trash at the site allegedly is piled up 50 stories high in some spots.

Xi-an was one of the few cities in China that relied on landfills to hold its waste before the area's first incinerator opened earlier this month, which the BBC says led to the goal being reached early.

The incinerator has a capacity of 2,000 tons of waste per day, according to the outlet. Four additional incinerators are scheduled to be completed by 2020 and should be able to dispose of 12,750 tons of waste each day.

“We have been gradually shutting down the site since October and will do so completely after the waste is commissioned to incineration facilities,” Shen, deputy head of the solid waste management department under the Xi’an Urban Management and Law Enforcement Bureau, told Sixth Tone.

In July, recycling was made mandatory in Shanghai, resulting in heavy fines and social credit rating lowering for people who failed to comply, according to the BBC.

It's part of a five-year plan in 2017 to reduce urban cities' reliance on landfills while increasing the use of incineration to eliminate waste.

As the country moves toward the process of incineration, the Jiangcungou landfill in Xi-an is expected to become an "ecological park" over the next several years, according to the outlet.

“We’ve added the plan to our agenda, but the details still need to be hammered out,” the official told Sixth Tone.